This is a look at the Devils zone exit and passing attempts against the Montreal Canadiens. In a largely back and forth game, the Devils exceeded their season average in shot attempts generated again, continuing a string of decent passing games. Overall, their zone exits were impressive as well, apart from a monumental gaffe by Adam Henrique.

The Devils hosted the Canadiens in a rematch from Monday night. It was a back and forth game that was very entertaining. Reid Boucher made his debut quite memorable in both regulation and in the shootout. Unfortunately, the Canadiens tied it late to spoil the party and the Devils would lose in a shootout. Let’s take a look at the stats for the night, including Adam Henrique’s turnover that led to the tying goal in the final minute.

Boucher performed admirably in his debut, completing 10/12 passes overall, including 8/9 in the OZ, and generated 4 shot attempts overall, including 1 from the neutral zone. Boucher set up the shot that Michael Ryder scored on, but we shouldn’t forget the play Andrei Loktionov made in getting the puck back to Boucher in the first place. Sometimes those things get lost in these stat recaps, and I wanted to point it out. Damien Brunner finished 10/11, pretty even across all 3 zones, but failed to generate a shot attempt. Dainius Zubrus was nearly perfect: 17/18 and 8/9 in the OZ. He generated 3 shot attempts. Adam Henrique was a busy man tonight, leading the team in SAG with 5 and tied with Jaromir Jagr for OZ pass attempts with 15. He converted at a better rate, however, finishing 12/15.

Travis Zajac, Andrei Loktionov, and Patrik Elias all attempted 10 passes in the OZ, generating 10 shot attempts between them. Michael Ryder was similar to Brunner in his passing (accurate, but few attempts) though he did generate 1 shot attempt (and score of course). Steve Bernier hasn’t slowed down since jumping up to a 2nd line: 16/17 passing with 3 SAG.

In a fairly active game for the defensemen, they exceeded their average OZ pass attempts by 8 and were about average in the other 2 zones. Jon Merrill continues to pile up the pass attempts as he led the blue line in the DZ. Overall, Marek Zidlicky led all defensemen with 28 passes, including 11 in the OZ! He didn’t waste many either as all 5 of Zid’s SAG came from the OZ. Andy Greene created 2 shot attempts, but was a bit off in his own end tonight, going 12/16. Mark Fayne continued his stellar passing of late, missing only 1 of his 14 attempts. Anton Volchenkov was low-event as usual, and Eric Gelinas put up a decent passing game, although he still makes his fair share of turnovers. 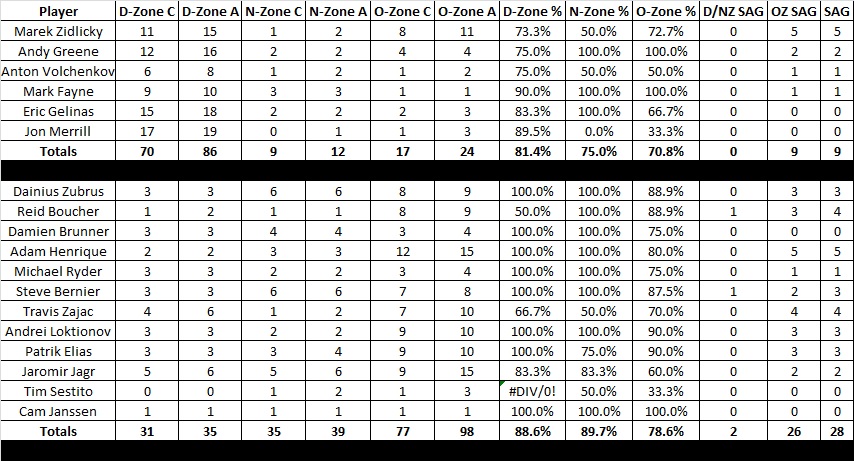 Adam Henrique’s night had 2 turnovers on his 3 attempts, the most notable being the soft clearing attempt right onto Brian Gionta’s stick. Give Henrique the secondary assist.

Collectively, the forwards finished at 60.7 PE%, which is very good, as everyone besides Henrique finished over 50%. Not much to complain about here. Jagr was a beast, successful on all 10 attempts, 8 of them with possession. Apart from Henrique, the forwards did quite well.

A total of 8 turnovers for the defensemen tonight, with Gelinas accounting for 3 of them. The group finished at 50 PE% again, an improvement on the season average again. Merrill led the way at 80 PE%, but had the fewest attempts. The rest of the defensemen averaged between 40 – 50 PE%. 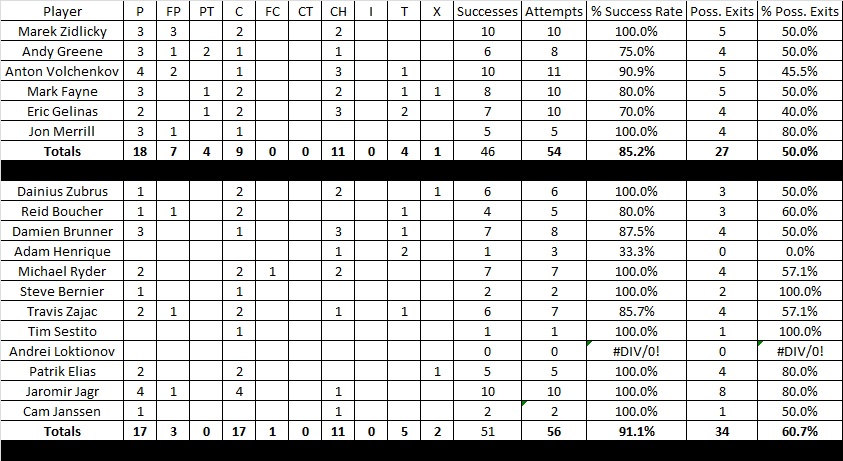 Thoughts on tonight’s stats? What are some things you might like to see these stats compared to in my 10-game reviews?