Return of the Mark

Mark Fayne reclaimed a regular role in the lineup recently probably due to injury. He's made the most of it and rebounded nicely after a slow start. This brief analysis will highlight the recent improvement in Fayne's game.

Share All sharing options for: Return of the Mark

The words "Mark Fayne" and "healthy scratch" have appeared in the same sentence far too frequently over parts of the past two seasons. Fayne was Andy Greene's most common partner during the 2011-2012 season and the Stanley Cup Run. The two were steady and ultra reliable, if unspectacular. They were really the anchors of the New Jersey defense, and a big reason for the team's success. This is why it was so surprising when Fayne found himself in Pete DeBoer's doghouse for stretches of last season. However, when all was said and done, despite the healthy scratches, Fayne slid back into his old role when he was on the ice and managed to do quite well once again. He spent a lot of time on the ice with both Andy Greene and Bryce Salvador and carried his own weight. It also appears he made Salvador much more serviceable.

Although there was some uncertainty due to last season, I think the common line of thought was that this situation was behind us and Mark Fayne would be a regular part of the lineup again starting off this season. That was not the case. Mark Fayne was a healthy scratch for 10 of the Devils first 18 games. He really didn't play all that well when he was in the lineup either. This isn't totally surprising for someone who didn't play his second game of the year until the team's eighth. Either way, Fayne wasn't playing well, the Devils were losing, and things weren't working.

To demonstrate some of Fayne's early season struggles, I'll point to Ryan's passing stats. By the way, If you haven't been reading Ryan's passing stats, you should. In his twenty game review which posted on Monday, Fayne doesn't come out looking that good. The one positive I can see, is that you can note a slight improvement in Fayne's defensive zone passing accuracy from his first 4 games (top chart) to his first 10 overall games (second chart). The Devils first twenty games, however, only included 10 games for Fayne, and mostly represent the time before his recent surge. Either way, his passes were not generating many shot attempts at all early on. I expect this to change for the better during the next review, reflecting Fayne's better play of late. If you've been following the game by game reviews for recent games, you'll notice an uptick.

In fact, Fayne has recently rebounded to a point that his overall season possession numbers are back to looking more like his career numbers. For an interesting look at Fayne's season so far relative to the other Devils defensemen in terms of usage, possession, time on ice, and quality of competition, Rob Vollman's Hockey Abstract provides a very interesting chart.

Here is a screen shot of that chart showing all of the Devils defenders for this season. Basically, the farther to the right, the more offensive zone starts a player got. The farther up, the tougher competition he faced. And, the bigger the bubble, the more ice time the player receives. The deeper blue the circle, the more positively possession moved in the Devils favor when that player was on the ice. For a more thorough explanation of how this works, see here. 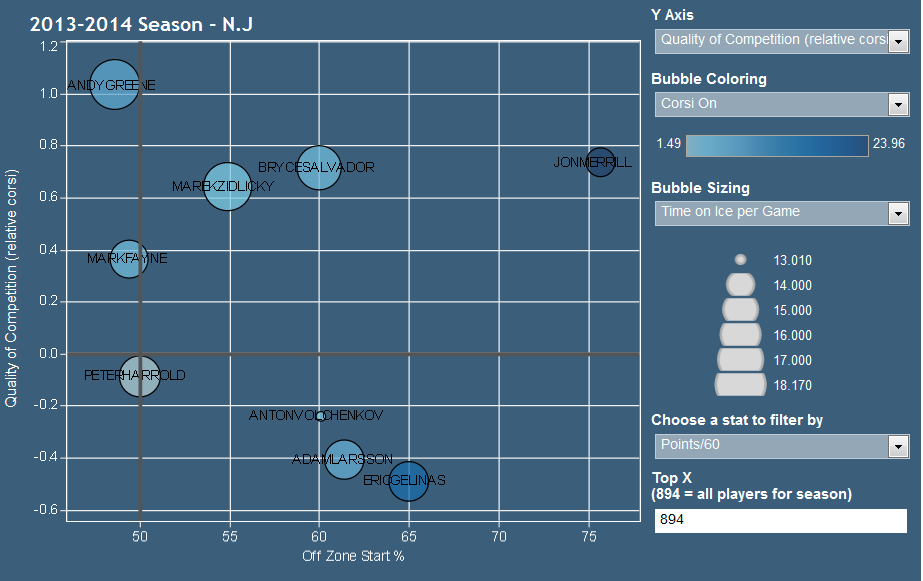 One thing that stands out here is that Mark Fayne and Andy Greene are the only ones who start out less than 50% in the offensive zone, albeit by a small amount. The fact that Peter Harrold's bubble is almost directly in the cross hairs does not mean we should shoot him, but the gray color shows that he is not moving play forward as much as the other defenders. (Side note: look at the color of Merrill's bubble! That can easily change due to the small amount of games he's played..but so far so good!) What you can also see from this chart is that Fayne is back in a shutdown role, and faring well. When looking at this overall picture, however, it doesn't show the stark contrast between his early season bad play and his recent run of success.

To demonstrate his recent run of great play, I put together a chart which shows Mark Fayne's corsi for, corsi against, and CF% over the past 10 games. I also included the totals for the Devils team overall those same games. I then used those recent numbers to extrapolate his early season corsi totals. See below: 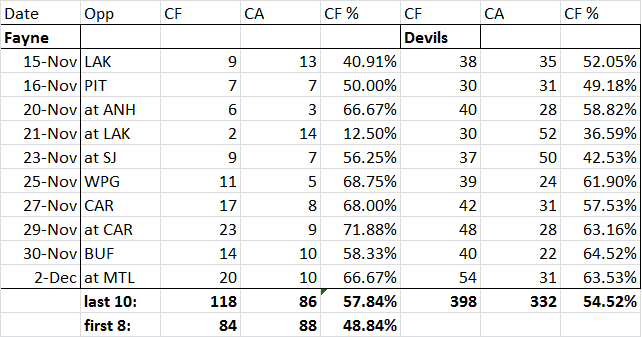 note: all stats in the chart from Extra Skater.

As you can see here, Fayne's possession numbers are much improved since he has returned to the lineup and played on a steady basis. Not only has he far outperformed his early season numbers, Fayne has also been a plus possession player relative to his teammates over the past 10 games as well. If you look at the last 5 games, he is really pushing play forward and winning his matchups (as are his teammates). Fayne is quietly back to doing his job very well on a nightly basis.

A quick look his WOWY charts shows he's back with Andy Greene and the two are succeeding together once again. Early in the season, Fayne spent a lot of time with Peter Harrold, and they mixed like oil and water. You can see that by looking a little farther down the same WOWY chart I just linked above. Some might say it would be easier to play with Andy Greene because he is so good, and they'd be right, to some extent. But, playing with Greene also requires some heavy lifting, so if a player wasn't really up to the task (i.e. Adam Larsson earlier this year) it would become obvious pretty quickly. This is not the case with Fayne. Most of the games Greene and Fayne have played together are recent games; games Fayne has dominated his matchups. With this recent run of play by #7, I think it's fair to say (to quote a crappy R&B song from the mid 90's): Now he's back up in the game...Lettin' all the people know...That he's back to run the show....Return of the Mark.