Another goal from Steve Bernier wasn't enough. This is a look at the Devils performance against Montreal from Monday night. Overall, they controlled the shot attempts, but due to some turnovers and less than stellar zone exit stats, they gave away the points to an opportunistic Canadiens team.

The Devils came into Montreal on the back of some strong possession games and continued their positive play against the Canadiens. Unfortunately, as John noted in his recap, this game had an all-too-familiar end to it. While the Devils controlled most of the play and out-attempted the Canadiens, they could have dominated even further had it been for some more efficient work in their own end. I’ve broken down the SAG categories to those generated in the Offensive Zone and those generated in the Neutral/Defensive Zones.

The usual big guns were out in force tonight as Dainius Zubrus, Travis Zajac, Patrik Elias, and Jaromir Jagr accounted for 19 of the forwards 29 SAG. 3 of Elias’ were generated from the Neutral Zone, suggesting passes that led teammates into open ice. Michael Ryder had a very effective game, completing each of his 8 passes in the offensive zone. Jagr, Zubrus, and Bernier were the most wasteful, each missing at least 4 passes.

The defensemen had some poor percentages in the offensive zone, but otherwise were efficient. They produced 3 more shot attempts than they’ve been averaging. Of course, you’ll notice the high totals for DZ Attempts, which we’ll cover in the zone exit section, but the Devils spent more time in their own end than they should have. Andy Greene continued to be the most effective blue liner, while Eric Gelinas and Jon Merrill look like a future top pairing. 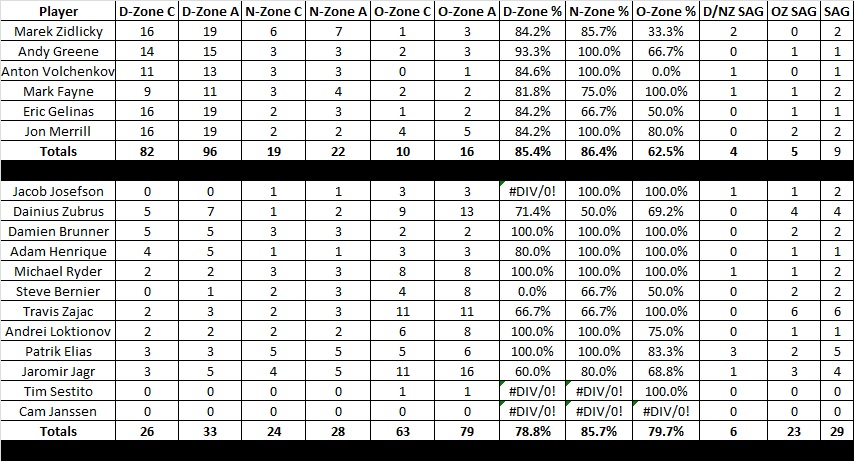 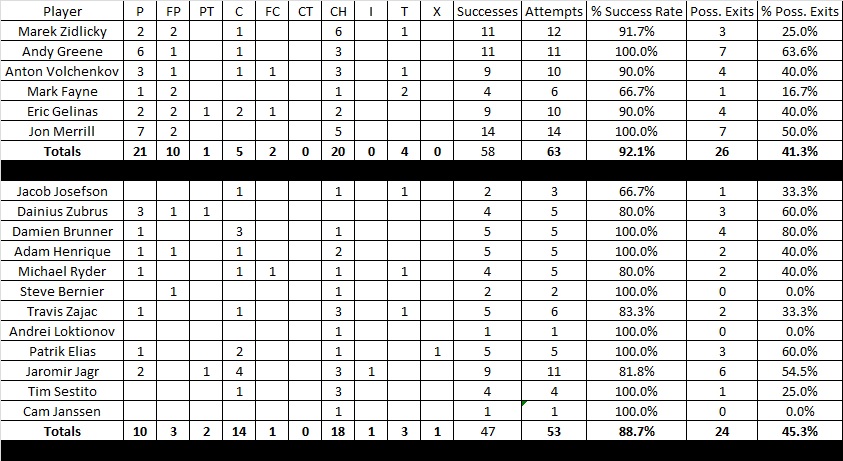 Jaromir Jagr had 11 exit attempts, at least 5 more than any other forward, and only surpassed by 2 defensemen. He finished at 54.5 PE%, which helped the group’s totals, but not enough to keep them from slipping to 45.3 PE% for the game. Travis Zajac, Adam Henrique, and Michael Ryder all finished under 40 PE%. Damien Brunner filled in nicely for Henrique after his exit, recording all but 1 of his attempts once he was bumped up to play alongside Patrik Elias and Steve Bernier.

After two straight games over 50 PE% as a group, the defensemen slipped considerably against Montreal, finishing with 41.3 PE%. Mark Fayne and Marek Zidlicky were the worst offenders. Anton Volchenkov and Eric Gelinas finished at 40 PE%. Jon Merrill and Andy Greene were the only defensemen at 50 PE% or higher. The 63 exit attempts was 10 higher than the defensemen’s season average, indicative of too much time trying to come out of their own end.

What does everyone think of tracking SAG by Offensive zone and the other two zones? StatsGuy suggested it off of the 20-game passing post from yesterday. Let me know what you think!