This is a look at the zone exits and passing stats for the New Jersey Devils' 40th game of the season. Or, more accurately, the "Patrik Elias can play with anyone" recap.

The Devils got back to their pass-happy selves against the Islanders, for the most part that is. The forwards exceeded 100 pass attempts in the offensive zone, but the defensemen were once again limited in their contributions to generate offense. For all of their possession and a good amount of SAG (31 by the forwards), the Devils finishing left you wanting more than a winning goal courtesy of Travis Zajac’s shoulder. A win’s a win in the end. Let’s get to it.

Adam Henrique nearly had a dominant game. He completed 15/16 passes, generated 5 shot attempts, but none of them ended up being shots on goal. A fine performance by Henrique though. Dainius Zubrus continued his decent play, 12/13 overall and 2 SAG/1SG. Stephen Gionta only completed 2/6 in the offensive end (4/5 elsewhere) and failed to generate a shot attempt.

Reid Boucher continues to have an up-and-down rookie season (to be expected, no?). He generated 1 shot (Henrique’s goal) and finished 3/7 passing overall. Michael Ryder and Steve Bernier made some quality passes as each generated 2 SAG/2SG. Travis Zajac completed all but 2 of his 16 pass attempts and generated 2 shot attempts.

As I mentioned above, the defensemen only attempted 15 passes in the offensive zone, generating 4 shot attempts and 3 shots. Surprisingly, Jon Merrill was the most effective in the Isles end, going 5/6. He finished 18/20 overall. The passing in the defensive zone wasn’t bad as no one missed more than 2 passes and everyone attempted between 8 – 13 passes. Completing 85% of their passes in the DZ and NZ, the blue line completed only 10/15 passes in the OZ. Overall, it was an efficient, yet underwhelming display. 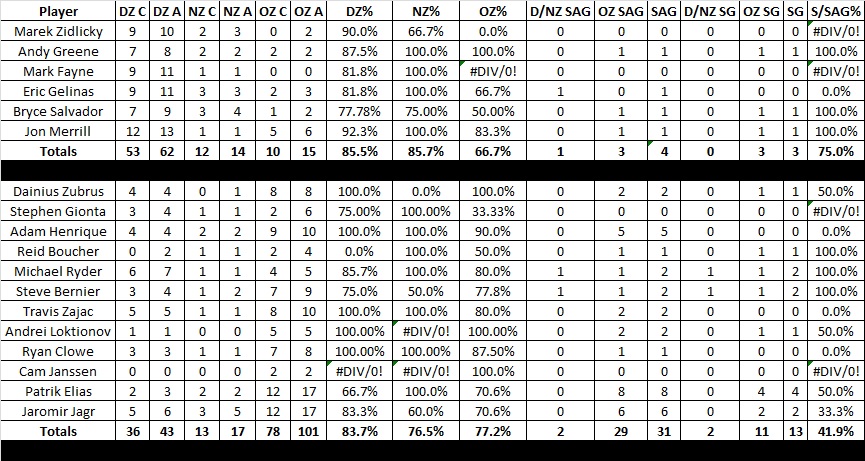 Eric Gelinas leading the way (thought he did have 1), but rather Mark Fayne and Bryce Salvador who each had 2. Marek Zidlicky and Jon Merrill also had 1 each, while Andy Greene had none. Collectively, the defensemen finished at 44.7 PE% with Fayne responsible for dragging the group down (12.5 PE%). 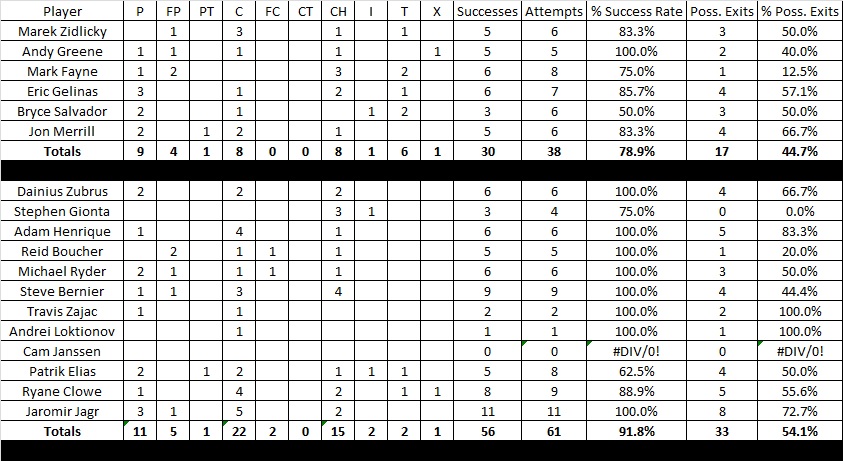