The Blue Jackets are quickly becoming a team that I do not enjoy watching them play the Devils. Be interesting how the rivalry develops over the years. Anyways, this game saw the teams trade chances of the power play variety as the teams regularly visited the box in the 2nd and 3rd periods. Columbus owned the first period for the most part and the Devils found a way to score against World-Beater Curtis McElhinney, thanks to Brodeur keeping them close. Alas, the shootout was the Devils undoing again.

A significant amount of special teams minutes limited the 5 on 5 passing and zone exit stats, but in those limited minutes, they still managed to meet their season average in SAG. The zone exits were a mixed bad as the Devils still haven’t gotten rid of the turnover bug, committing another 9 as a team, but both position groups exceeded the 50 PE% mark.

Dainius Zubrus went 14/16 on the night, generating 4 shot attempts and 1 shot. Mattias Tedenby had a quiet game, completing 3/4 passes with 0 SAG. If Tedenby had a quiet night though, then Stephen Gionta was a ghost: missing on his only 2 pass attempts. Adam Henrique had a strong night, completing 12/13 passes, generating 4 shot attempts and 2 shots.

Reid Boucher had a poor outing, finishing 4/7 with no SAG. Travis Zajac and Jaromir Jagr each generated 3 shot attempts and combined for 3 shots. Jagr missed all 4 of his passes in the neutral zone, but was solid in the other two zones. Patrik Elias had a poor night in the offensive end (5/9), but managed to generate 2 shot attempts and 1 shot. Collectively, the forwards were below their season average in every category last night.

The defensemen were a bit better than against Chicago in terms of generating chances, but not by much. Marek Zidlicky accounted for half the defensemen’s pass attempts in the offensive zone (5), as well as 75% of the blue line’s SAG (4). Eric Gelinas attempted the most passes (21), completing 16 and generating 1 shot attempt. Anton Volchenkov completed all 9 of his passes in the defensive zone, but failed to register a pass elsewhere on the ice. 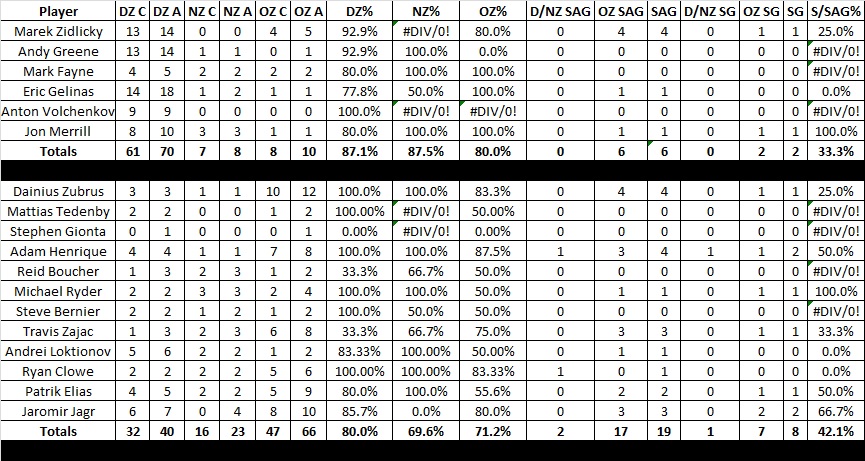 Gionta, Boucher, Michael Ryder, and Zubrus were the only forwards under 50 PE%. Andrei Loktionov did not attempt a zone exit on the night. All other forwards brought the position’s PE% to 55.6. Jagr and Zajac led the team with 7 and 6 attempts respectively, with most forwards attempting 3 – 5. Elias, Boucher, Jagr, and Zajac were responsible for the turnovers in the DZ.

Collectively, the defensemen finished at 54.5 PE%, a significant improvement of their season average. They’ve had a few strong games since the 30 game mark, so I’m expecting their season average to rise in my next summary after the Islanders game (number 40 on the season). 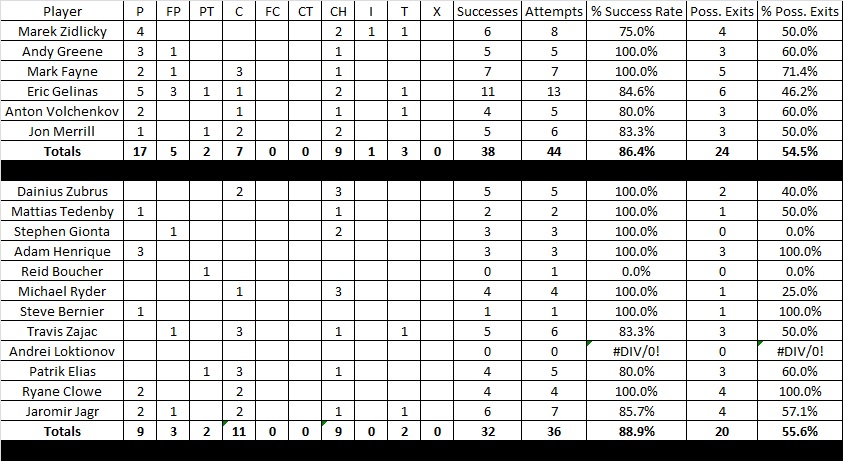