This is another look at the domination suffered by the Devils at the hand of the Blackhawks. While the passing stats were limited, but not awful, the zone exits saw the defensemen put up a season high in turnovers. Read on for the details.

One game after posting a season high of 54 SAG, the Devils managed just over half that amount against Chicago. They did manage to set a season high in turnovers, so the game was memorable for something. With the inability to generate any consistent pressure, the Devils were simply outworked and outplayed in both ends of the ice. No one skater stood out for positive reasons, although there were personal-lows for several players.

Typically, the line of Dainius Zubrus, Travis Zajac, and Jaromir Jagr will each attempt around 10 passes in the offensive zone alone, generating between 3 – 5 shot attempts. Against Chicago, Zubrus went 2/2 in the OZ with 0 SAG, Zajac went 2/5 with 1 SG, and Jagr went 1/5 with 0 SAG in the offensive zone. Jagr did generate 2 shots from beyond the OZ, however. So, knowing how ineffective this line was, it’s easy to imagine where the numbers go from there.

Adam Henrique was probably the most efficient forward on the night, finishing 7/8 in the OZ, 11/12 overall, with 5 SAG and 1 SG. His poor passing in the DZ aside, Michael Ryder also contributed well going forward. Jacob Josefson went 9/12 with 2 SAG/1SG. Mattias Tedenby went 10/11 overall and generated 1 shot attempt. Reid Boucher went 7/8 with 2 SAG. Not bad for the young crowd.

Note that not a single forward attempted more than 10 passes in the offensive zone, a sign of little territorial control. They generated 23 shot attempts, but as a group, the forwards only attempted 16 more passes in the OZ than the DZ. One of the next things I’ll look at in the 40 game recap, is what percentage of a player’s passes occur in each zone to see who is more active where.

The defensemen managed to generate only 5 shot attempts and 1 shot. Their passing in the defensive and neutral zones was average at best, and they only attempted 7 passes in the offensive zone as a group. Simply put, the defense was unable to get forward to make any significant contributions. Andy Greene had the most efficient night, only missing one of his 19 attempts. Anton Volchenkov only missed 1 pass as well, but attempted only 9. Marek Zidlicky (4), Mark Fayne (6), Eric Gelinas (4), and Jon Merrill (4) missed a combined 18 passes, which were performances all below their average numbers. 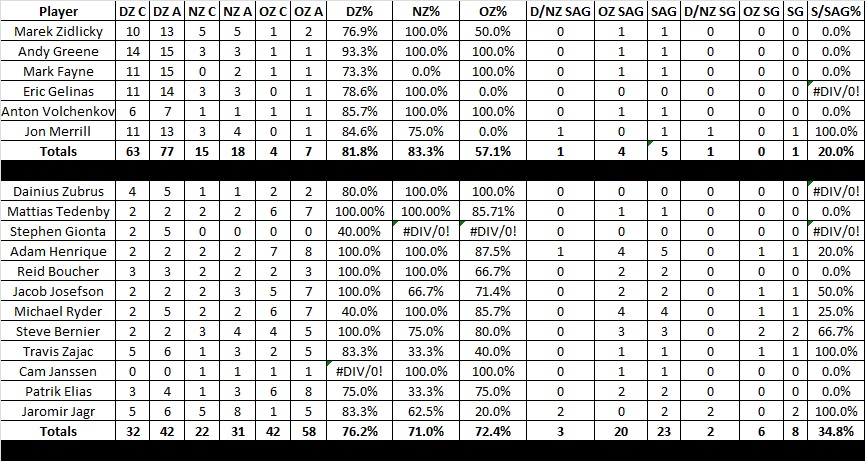 As a group, the forwards finished at 51.7 PE%. Zubrus and Ryder led the team in total attempts with 11 each. Zubrus was his usual solid self (54.5 PE%) but Ryder only netted a 36.4 PE%. Josefson was 8/8 in exits and finished a strong 62.5 PE%. Patrik Elias only had a 22.2 PE%. The forwards committed 4 turnovers, which, combined with the defensemen’s 11, means the team turned the puck over in the defensive zone 15 times! 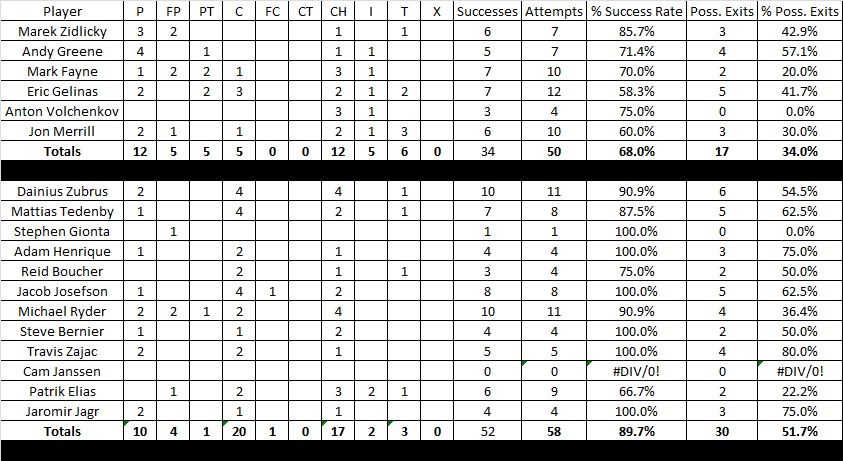