Eric Gelinas has been impressive as a rookie defenseman in 28 games with the New Jersey Devils, with his offensive skills and a shot so impressive, it deserved a nickname. This post explains how he's proven he belongs in the NHL while he's not a Calder Trophy contender right now.

Share All sharing options for: Eric Gelinas Making the Most of His Shot with the New Jersey Devils (But Not a Calder Candidate Yet)

Making the jump into the National Hockey League is never an easy task. It's not just about being skilled enough. A young player needs to be physically and mentally mature enough to handle a faster, higher quality of play. There needs to be an opportunity available, often coming out of . And the coaches have to you in mind for when those opportunities come, which can be driven in part by all of those practices, meetings, video sessions, and games in the minors or juniors back when a shot in the big leagues wasn't even possible. After all that, the player then needs to do whatever he can to show the coaches and his teammates that he belongs. That means doing good things on the ice in multiple games. That means bringing something to the proverbial table that others may not have. That means not being a net negative on the ice. It's not at all easy and if you need proof, just look at how Jacob Josefson and Mattias Tedenby have failed to establish themselves as regulars. Or, for more a positive example, look at Adam Henrique, Mark Fayne, and Adam Larsson performed when they were given their opportunities. One more member of the New Jersey Devils I think can join that latter list: defenseman Eric Gelinas.

Eric Gelinas has excited the New Jersey Devils fanbase. It's easy to understand why after 28 games played in the NHL this season. He's big at 6'4" and 210 pounds. He skates smoothly. He not only stands tall at the blueline but he has stood plenty of players up. While he's had some bad moments, he hasn't been a liability at all in his own end. And he has something the Devils' blueline has missed for years: a low, hard, and beautiful shot. For the first time in a while, the Devils have a defenseman who can just bomb away from the point and actually have it be an effective-looking play. His shot so good, I had to give it a nickname. I call it "The Truth" because it simply hurts. And The Truth has been set free in the NHL for four goals and several of the eleven assists Gelinas has picked up so far in 28 games. I mean, just look at this goal - how can any fan not love his power and release?

Of course, points are always appreciated. He's currently at 0.54 points per game. No Devil defenseman has surpassed that 0.5 plateau since Brian Rafalski's last season with the organization in 2006-07. He's tied with Jaromir Jagr with nine power play points for second on the team in that stat. That's big considering how lackluster the power play has been all season. I understand that this is a results-oriented business and the simple fact is that Gelinas has them. That's a big driver of the excitement from the fans and also some very complimentary quotes from Jagr and Martin Brodeur, as reported in this Sunday post by Tom Gulitti at Fire & Ice. It's the other things that Gelinas has done that make me think that he has proven that he's a NHL-caliber defenseman right now.

Let's stick with the shot. Gelinas takes plenty of initiative on the ice. He's averaging over two shots per game with 64 in 28 games. He's got more shots on net than any Devils defenseman right now. According to his game log at NHL.com, he's only been held without a shot in three of his 28 games this season. According to Extra Skater, he's got 135 shooting attempts which is third on the team. He's behind Jaromir Jagr and Andy Greene in total shooting attempts and those are two players who have played more games and minutes than Gelinas. This all means that Gelinas has been open for shots - helped in part by the Devils' tendency to get the puck down low on zone entries - and he's been more than willing to bring out The Truth over and over. It's not only good for Gelinas' numbers, but it's good for a team's possession (he's turning control into attempts) and their shot count (the Devils are still last in the league in shots per game with 25.8).

Speaking of possession, Gelinas has been fantastic in this regard. According to Extra Skater, his Corsi percentage (all attempts for over all attempts for and against) is an excellent 56.6%. What that means is that when Gelinas is on the ice in 5-on-5 play, the play is usually going forward. It speaks well of his defense, too. It suggests that teams aren't regularly picking on him. It suggest that he's getting stops and turning that into offense at times. That percentage should come with a caveat, though. Also according to Extra Skater, Gelinas has the highest offensive-to-defensive zone start percentage on the team. He also does not face strong competition. This is completely understandable by DeBoer. He's a rookie and an offensive minded defenseman; there's no need to force him into tough situations over and over. He's getting comparatively softer minutes than the other defenders. So he's not necessarily the possession-driving tank a 56.6% Corsi percentage would indicate.

But all Gelinas can do is perform with the shifts he's been given. So far, he's been wrecking them. On Wednesday, Jerry put a great chart together highlighting the forwards' Corsi percentages with certain defensemen. Only two defensemen were universally positive with the top nine forwards: Greene and Gelinas. Even though he's getting favorable zone starts and not going up against weak competition, he's playing well with most of the forwards in front of him. Even though he's throwing up a lot of shooting attempts, the other forwards are able to keep plays going with it - it's not always a one-and-done situation when Gelinas unloads, which can be a benefit for attacking purposes.

Lastly, consider how he's been used. While Gelinas does get favorable competition and zone starts in 5-on-5 play, he does play a significant number of minutes. According to NHL.com, his average even strength ice time is 16:31 and his overall average ice time is 19:21. Both are fourth among all Devils defensemen and one of the defenders ahead of him is Bryce Salvador. He's also fifth in 5-on-5 time on ice per 60 minutes with 15.6, finishing just behind Mark Fayne, who's only now just ahead of him at 15.7. Gelinas has played with Larsson, Jon Merrill, and recently Marek Zidlicky. While he may start as the third pairing, it hasn't been uncommon to see him take shifts late in games, in overtime, or other situations. The only aspect of the game he's been shut out from has been penalty killing, but that's perfectly fine. He's not getting the Anton Volchenkov treatment where he may play 12-14 minutes at evens with a bunch of special teams time to boost it up to the 15-17 minute level. Gelinas has had some rough spots, but he's been good enough for the coaches to play him quite a bit.

In total, he's clearly been the best rookie on the New Jersey Devils. He's been productive. He manages to keep attacking even when the points don't come. He plays much more than limited minutes. He's acquitted himself well despite three different partners this season. While he's been given a lot of help with respect to his situation, he's sparkled from a possession standpoint. And he brings a fantastic shot to the blueline that none of the other defenders really have. Yes, he's had a few miscues with decision making and positioning, but that's no different from the other defensemen on the team and that can always get better. Lastly, Gelinas has contributed for the better part of 28 games. He hasn't been a one or two week wonder where he'll impress and then fade out. He's been putting in good work for close to two months, work that is apparent even when he doesn't register a point. Gelinas has made the absolute most of this opportunity he got when he was called up. I think the only way he doesn't stay in New Jersey is either he gets hurt or the Devils can't make space for him.

That all said, I do think we should pump the breaks on any notion that he's the best rookie in the league. It was a point raised by Gulitti's post and I've been thinking in past few days how he has stacked up with other rookies. Usually, the highest scoring rookies are in line for the award and they are usually forwards. Prior to Sunday's games, Gelinas ranked thirteenth in scoring among rookies. Forwards such as Tomas Hertl, Nathan MacKinnon, Alex Chiasson, and (he's seriously a rookie) Chris Kreider are well ahead of Gelinas and, like him, are contributing more than just points to their respective teams. If Gelinas can somehow maintain a 0.54 point per game rate for the rest of the season, then he may enter the conversation. But that's a tall order for an experienced player, nevermind a young one on a low scoring team.

It may be more appropriate to consider him a contender for the unofficial award for best rookie defenseman. Here's how Gelinas' stacks up by basic and some 5-on-5 numbers from Extra Skater's player dashboard against eighteen other defensemen who have played at least 19 games this season: 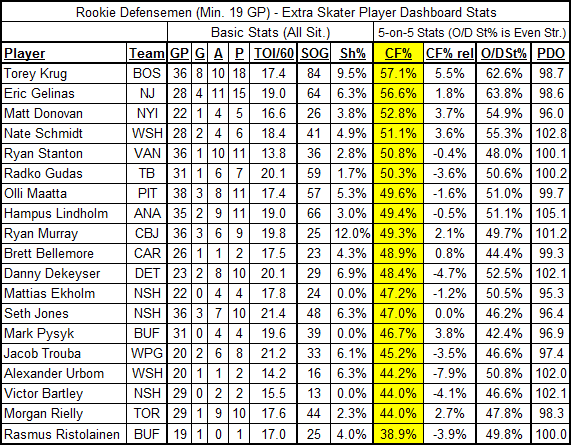 From a production and possession standpoint, only Torey Krug on Boston has been better than Gelinas. It's not a complete slam dunk. Like Gelinas, he gets very favorable zone starts. Unlike Gelinas, he plays fewer minutes per game and he had more games to get more shots and more points. From an offensive standpoint, one could argue between the two. One could also argue that some other defensemen should get more notice that are producing points while not getting relatively easy zone starts and minutes at even strength. They may have to improve in possession, but if Radko Gudas, Hampus Lindholm, Olli Maatta, and (when he returns) Seth Jones manage to do it, then the conversation for best rookie defensemen opens up. (It could also open up if Ryan Stanton gets many more minutes.) But I would say the Calder discussion isn't likely to involve a defenseman unless Krug, Gelinas, or someone else gets hot and out-performs several forwards who are also doing rather well this season. It's not impossible, but it'll take a lot for any defenseman to get that kind of consideration, much less Gelinas.

At the same time, the fact that this is even a point beginning to be raised for Gelinas speaks to how well he's been doing so far. While I don't think he's the best rookie in the league or necessarily the best rookie defenseman, it's unreasonable to even discuss him. It's just further evidence that he's been New Jersey's standout rookie this season and that he's turned a call up due to injury into what I hope will be the start of a long and fruitful career with the New Jersey Devils.