What a night by the Devils top line. In a game that saw them post season highs in SAG, Jaromir Jagr, Dainius Zubrus, and Travis Zajac were a pillar of domination against the Capitals. Read on for their numbers and other, less amazing, stats.

The Devils had some bad bounces and less than stellar goaltending, but simply dominated at evens and earned a just reward in OT. The top line absolutely wrecked Washington and the team put up a new season high of SAG with 54. Read on and fall in love with Jaromir Jagr all over again.

This section belongs to the top line of Jaromir Jagr, Dainius Zubrus, and Travis Zajac. Of the three, no one attempted fewer than 20 passes in the offensive zone, accounting for half of the forwards pass attempts overall. Jagr generated 9 shot attempts and 4 shots; Zubrus generated 4 attempts and 3 shots; and Zajac generated 5 attempts and 5 shots. A masterful performance.

Patrik Elias had a better game than I originally though, generating 8 shot attempts and 4 shots on 8 fewer pass attempts than Jagr. He was a bit inconsistent, but at least made his presence felt in the offensive zone as best he could. Mattias Tedenby went 8/10 overall with no SAG, but he was getting several pucks on net that Elias and Steve Bernier set up for him. Adam Henrique was also strong in the OZ, completing 12/15 passes and generating 8 shot attempts, but only 2 resulted in shots.

The defensemen had over a hundred passes in their own zone, which isn’t good, but at least their percentage was very good overall (89.1%). The blue line only generated 9 SAG and 3 SG, but this was a night that belonged to the forwards. Some notable performances were Jon Merrill (18/22 in his own zone) and Mark Fayne (20/22 in the DZ; 5/5 in the OZ). Andy Greene was dominant as he missed only 2 passes out of his 29 attempts, including 7/7 in the offensive end. Greene and Fayne each generated 4 shot attempts and 3 combined shots. They looked like a true number 1 pairing tonight. 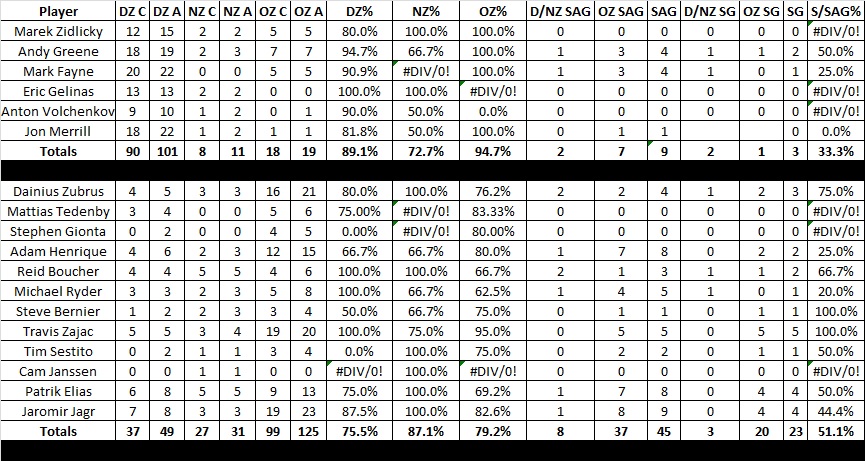 Eric Gelinas only had 1 turnover, but he seemed a bit smarter last night (as you saw in the passing chart, he completed all of his passes). Fayne led the team with a 71.4 PE%, while Greene’s only blemish on the night was his 33 PE%. Anton Volchenkov was perfect on his 8 attempts, with 4 keeping possession. Marek Zidlicky and Jon Merrill brought the team’s average down significantly. The group committed 5 turnovers, with Merrill responsible for 2 of them. 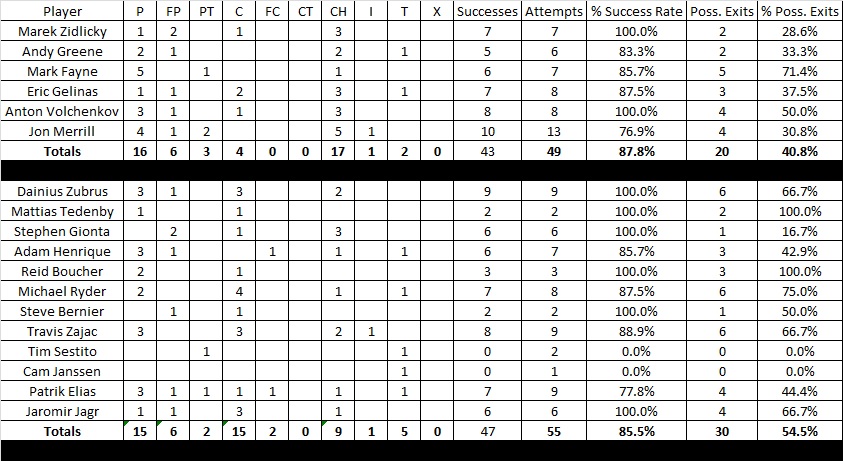