This is a look at the (mostly) unimpressive zone exits and passing stats for the Devils 36th game of the season. Call it the "remember, they're still rookies" edition of these stats. Read on for more details.

As John noted in his recap, this was a low-event game and the passing/zone exits reflect that for the most part. The game went in waves, with each team controlling the ice for various periods of time. In fact, a lot of the passes for the Zubrus-Zajac-Jagr line came in bunches as they were able to get the puck deep and not give it back for extended periods of time. Adam Henrique was involved early on and got things started with a great pass to Michael Ryder for the opening goal. Unfortunately, the game would end with an OT goal for Anaheim. As you’ll see below, proper positioning isn’t the only growing pains Eric Gelinas and Jon Merrill are going through.

Damien Brunner only attempted 3 passes, generating 1 shot attempt before getting injured. He had a solid start and it was a shame to see him go. Get well soon, Brunner.

Brunner’s injury is exactly the reason why Deboer should not use Gionta, Sestito, or Janssen in the lineup. Their limited quality becomes that much more of an anchor on the team if someone is subtracted from the top 9 forwards.

Dainius Zubrus was a bit off in the defensive zone, as was most of the team on the night, but was his usual pest in the offensive end, generating 3 shot attempts and 1 shot. Jaromir Jagr finished with similar numbers, but Travis Zajac was the most effective passer on the night: Zajac completed 25/28 passes, generating 5 shot attempts, but only 1 shot.

Adam Henrique didn’t attempt as many passes as those on the top line, but he made the most of them with 4 shot attempts and 2 resulting in shots (and 1 goal!). Patrik Elias had decent night, completing 15/20 passes, but with only 1 shot attempt. Andrei Loktionov has all but disappeared with the lack of quality line mates. Way to manage your resources, Deboer!

As a group, the forwards generating 25 shot attempts, 7 of which resulted in shots, about 28%. It’s too soon to say whether that’s good or bad, but it’ll be one of the stats I’ll look at as we get further along into the season: a pass efficiency rating of sorts.

Well, consistent with the rest of the game, the defensemen offered little in terms of shot attempts: generating 5, with only 2 of those becoming actual shots. Mark Fayne went 16/18 overall, generating 1 shot; Jon Merrill only missed 1 pass in the defensive zone, going 11/12 and 2/2 in each of the other two zones. Marek Zidlicky failed to create any shooting attempts for his teammates. His passes were lower than normal, with only 13 attempts in the game.

Eric Gelinas went 8/12 in the defensive end and 3/3 in the offensive end, generating 1 shot attempt. I’ve noticed that his passing and turnovers had steadily gotten worse since Adam Larsson went out of the lineup. Perhaps the Swede is the tonic Gelinas needs.

Andy Greene was the most active with 24 attempted passes, 20 of those in the defensive end. He generated 1 shot. You’ll see that he and Fayne attempted 36 of their 42 passes in the defensive zone, suggesting they most of their team in their own end.

Anton Volchenkov played his usual game, going 6/6 in the defensive end and 2/4 in the zones outside his skill set. He was the only defenseman to generate more than 1 shot attempt, so that there tells you all you need to know about the offensive contribution from the blue line. 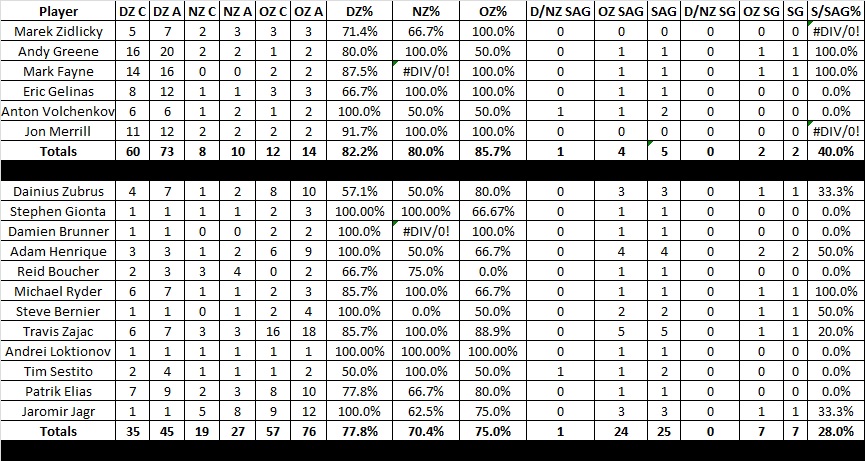 You’ll see blanks for Brunner and Loki due to injury and limited opportunities. As a group, the forwards right on 50% PE. The best performers on the night in terms of volume were Michael Ryder (10 attempts, 9 with possession) and Patrik Elias (11 attempts, 7 with possession).

Zubrus (43%) and Jagr (33%) were not their usual selves, though Reid Boucher managed 3 of his 6 attempts to maintain possession. Stephen Gionta finished with 2/3 of his exits the possession variety. 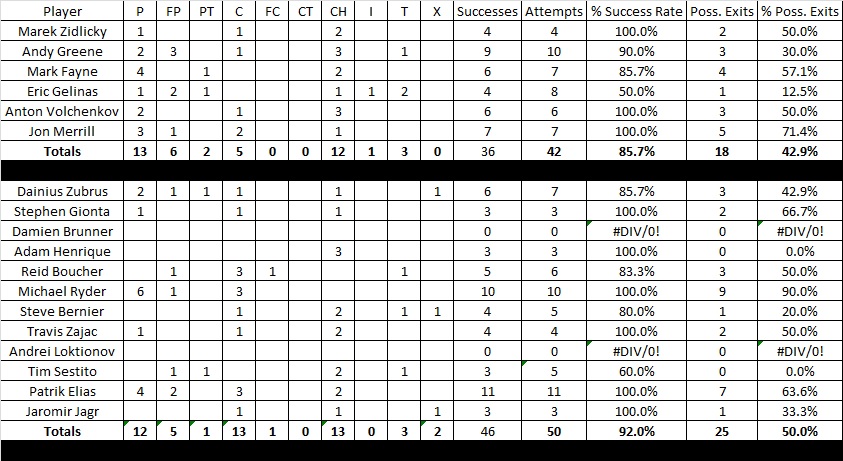