This is a look at the zone exits and passing stats for the Devils 35th game of the season. I've added new fields to the passing charts to delve a little deeper. Read on and give your thoughts!

The Devils found several ways to make the most of their chances last night against the Ottawa Senators. While the shot attempts were comparable, the Devils got more rubber on net and made them count. Some of the totals might be lower than normal due to the amount of special teams play, but one thing you’ll notice was that this game was closer than the score indicated: the Devils passing percentages were not great and their zone exits needed some work.

Also, you’ll see several new columns from here on out: Columns N, O, P, and Q. As this evolves, I’m heard from many people they’d like to know about not just shot attempts generated, but actual shots. I agree that this would be good to know as it would allow us to get even further into the “who generates the most quality shot attempts” debate, not just the “who generates the most?”

The way it works is you’ll see the SAG by zone totals like normal, followed by corresponding columns that total the shots generated from those shot attempts. Column Q is a shot per shot attempt generated percentage.

Forwards: The forwards were decent in their own end, but were only 71.4% in the neutral zone and 75% completion in the offensive zone. Due to the nature of the game and special teams time, they only generated 20 shot attempts, 12 of which resulted in shots. This SG/SAG percentage will be something I’ll look at during the 10 game splits.

Dainius Zubrus and Andrei Loktionov led the way with 4 SAG each, but Zubrus generated 3 shots to Loki’s 1. Damien Brunner (2 SAG), Patrik Elias (3 SAG), and Jaromir Jagr (2 SAG), each generated 2 shots apiece. Travis Zajac had a second game in recent memory with no shot attempts generated. I don’t think I’m missing him out there, but it’s an odd stat. I’ll be watching him much closer next game.

Michael Ryder generated 3 SAG, resulting in 1 shot. Of course, one of those shot attempts was Gelinas’ missed shot that Boucher banged home, so we shouldn’t only look at the shot generated column. Back on the 4th line, Steve Bernier had very little activity, totaling 2 passes, which was the same as Cam Janssen. Stephen Gionta had a bit more activity, but nothing of consequence on the game (remember, these stats are only 5v5).

Defense: The defensemen’s DZ% was the only zone above their season average, and just barely. Eric Gelinas had a rough night at both ends of the ice, going 9/15 in the defensive zone and 2/6 in the offensive zone. He did generate 1 shot from outside the offensive zone, but overall it was not a good game from Gelinas passing-wise. Marek Zidlicky had 3 SAG, but only 1 turned into a shot on net. Otherwise, he had a decent game, going 17/20 across all three zones.

Andy Greene attempted the most passes (25), completing 19 of them and generating 2 attempts with 1 shot. Mark Fayne, Anton Volchenkov, and Jon Merrill all had efficient nights passing, only missing 4 passes between them. Fayne had 2 SAG, while Merrill had 1, but it also turned into a shot. 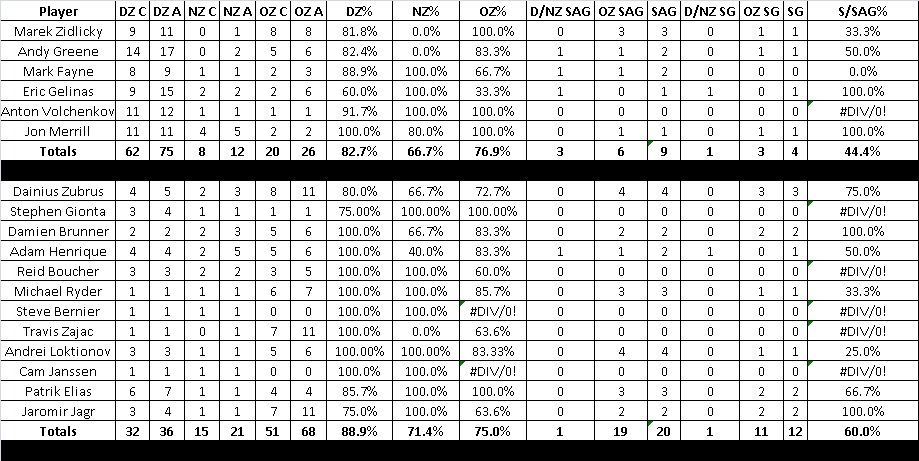 Zone Exit Stats Forwards: It was a pretty bad night all around for zone exits, but most notably the forwards. Only a 43.3 PE% is pretty ghastly. The only real positives were Zubrus, Adam Henrique, and Patrik Elias…sorta. Elias was perfect on all 12 of his exit attempts, but only 2 maintained possession. Zubrus was perfect on all 10 of his, but 6 maintained possession. Gionta reminded everyone what he’s capable of on the short-handed goal, and then spent the next 58 minutes reminding everyone what he’s capable of everywhere else: a 14.3 PE% and 3 turnovers. Brunner, Zajac, and Loki also had a turnover apiece, but Gionta is a huge step down from Jacob Josefson. 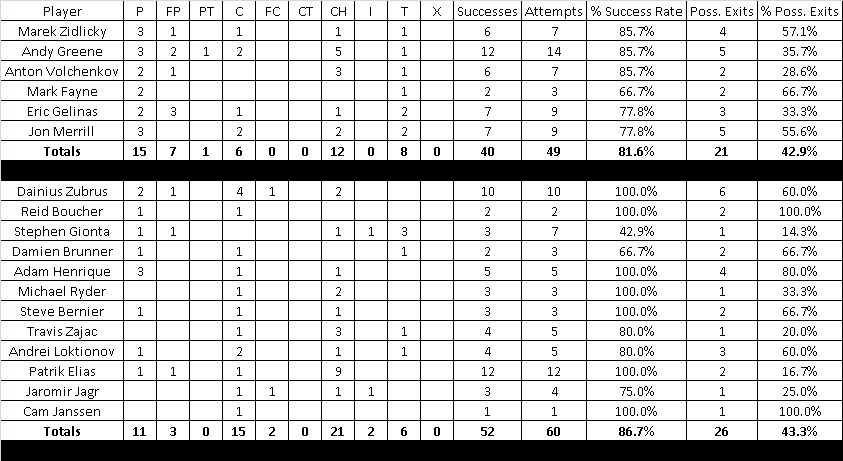