Dainius Zubrus was flying against Tampa Bay, but he owes much of his air time to Jaromir Jagr. This article takes a look at the zone exits and passing stats for Game 34 of the season.

The Devils didn’t display the passing and offensive prowess they had in recent games, instead settling into a game marked by failed zone exits, less than stellar passing, and little to no help offensively from the blue line (aside from one sweet pass from Eric Gelinas). In the end, Jaromir Jagr and Martin Brodeur were enough to steal a game. Read on for a look at how Jagr was indispensable during this game, and the highs and lows from his teammates.

Steve Bernier had 10 pass attempts in the offensive zone, but only completed 6 of them. He did generate 3 shot attempts, so he wasn’t being completely wasteful, but he definitely missed on a few chances. Reid Boucher also misfired a few times, finishing 7/12 and generating 2 shot attempts.

I’ve noticed that shot attempts generated from outside the offensive zone tend to look like better chances, i.e. semi or full breakaways, or at least a pass into space for a player to have enough time to shoot. I’m wondering what I can look at to compare the quality of the shot attempts generated from the zones. One place to start, I’ve decided (and many of the commenters have suggested this) is to track shot attempts generated and shots generated. I’d be willing to bet that shot attempts from the neutral or defensive zone have a higher percentage of becoming actual shots on net. What are your thoughts on this? There’s been a lot written about shot quality and whether or not it has merit, but I’m starting to believe there’s a certain “shot attempt/pass quality” that we should track to, at the very least, rule out if I’m just wrong in this idea.

Another game, another efficient night of passing for Jacob Josefson. He completed all 4 of his passes, with 3 in the offensive zone, and generated 2 shot attempts.

Defense: A much lower game in terms of overall passes, although Zidlicky continued to make his presence known in the offensive end of the ice, completing 7/9 and generating 3 shot attempts. Unfortunately, besides Eric Gelinas and Mark Fayne combining to generated 3 as well, no one else offered much. The completion percentages were quite good, but the defensemen simply didn’t have the puck as much as compared to recent games.

You’ll see that because of the poor zone exits and the Devils being out-attempted in the game as John noted in his recap, we can conclude that Tampa simply had more of the puck, so that explains the low pass totals. Andy Greene and Fayne were the most active in the defensive zone, with Jon Merrill right behind. As limited as the totals were, everyone completed a pass in every zone. 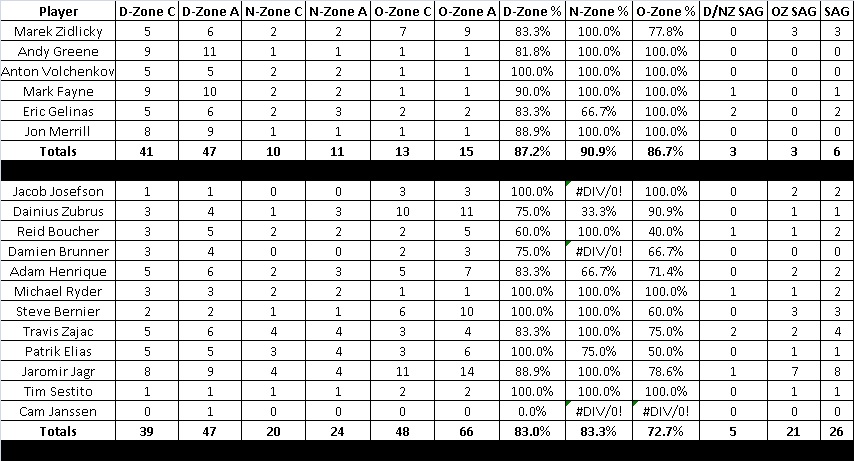 Zone Exit Stats Forwards: You’ll see this same song for the defensemen, but low PE% (43.1) and a high amount of turnovers (6) yield to a poor game exiting the zone. Jagr just simply had a boss game in both passing and zone exits, however, as all 5 of his exits were with possession. Patrik Elias had the next best game (62.5 PE%). Boucher was successful on all 7 of his attempts and 4 maintained possession, proving he can play competently in “the two zones” as Lou advised him to do.

Michael Ryder and Adam Henrique had less than desirable exit stats, combining for 1 possession exit between them.

Normally sure-exited (see what I did there?) Zubrus finished with only a PE% of 37.5. Bernier’s below average-at-best passing night was a similar theme for his zone exits. He had 2 turnovers and a 44.4 PE%. Zajac, Damien Brunner, and Josefson were the only other forwards at 50 PE% or higher. Cam Janssen and Tim Sestito combined for 0 possession exits on 7 attempts. But our record is better when they’re in, so it’s all good.

Defense: 7 total turnovers, with 3 coming from normally conservative Anton Volchenkov. Greene, Fayne, Merrill, and Eric Gelinas all had 1 apiece, while Zidlicky didn’t turn the puck over, but also was the only defenseman not to have a successful possession exit. Collectively, the defensemen finished at 31.4 PE%, which is terrible. Their success rate was only 74.3%, which is also quite low. So, not only did the defensemen fail to exit with possession, they failed on every fourth attempt to even exit the zone. 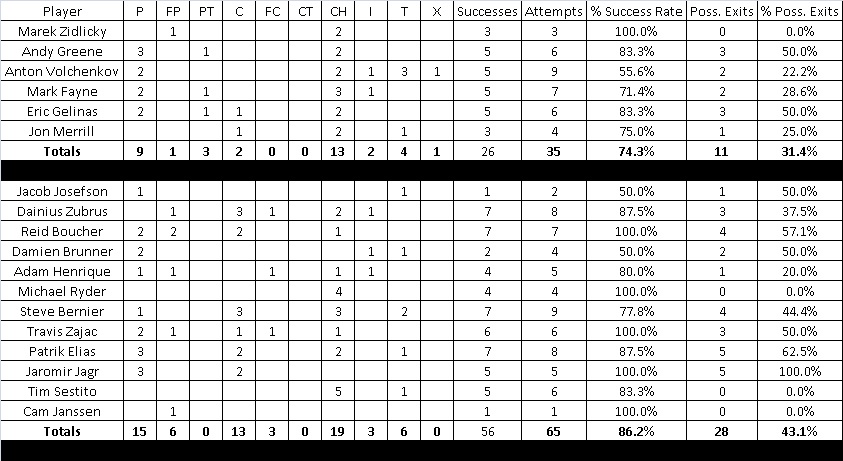