Jacob Josefson carried the puck out of the zone quite a bit against Pittsburgh. The forwards as a group did very well, while the defensemen lagged behind. Let's take a look at who else performed well in the zone exit and passing departments. Hint: Several Devils passed the puck well.

The Devils passed and shot, passed and shot, and then passed and shot some more. Once the Penguins went up 3-0, the Devils stormed back to tie it within the first five minutes of the second period. They didn’t slow down and went after the Penguins shift after shift. In doing so, the Devils generated their highest amount of shot attempts via passing this season with 55, 17 for the defense, and 38 for the forwards. Let’s take a look at how they fared individually.

Travis Zajac had the most passes in the offensive zone with 17, completing 14 of them. Zajac created the most for his line mates with 7 SAG. Patrik Elias tied Zubrus with 6 SAG, though 2 of his were from outside the offensive zone. In fact, everyone generated at least 1 shot attempt except for Cam Janssen. His partner-in-crime, Tim Sestito managed to generate 2.

The forwards totaled over a hundred pass attempts in the offensive zone for the second straight game.

Each defenseman generated at least 1 shot attempt and attempted a pass in each zone. Mark Fayne only missed 1 pass on the night, generating 3 shot attempts. Andy Greene wasn’t as sharp as he normally is, misfiring on 7 of his 32 pass attempts. He still generated 2 shot attempts.

Eric Gelinas and Jon Merrill weren’t awful with regards to their passing as each missed only 3 passes on the night. Each generated some offense for their teammates. I’m not surprised Deboer split them up as they’ve been turning the puck quite regularly lately. 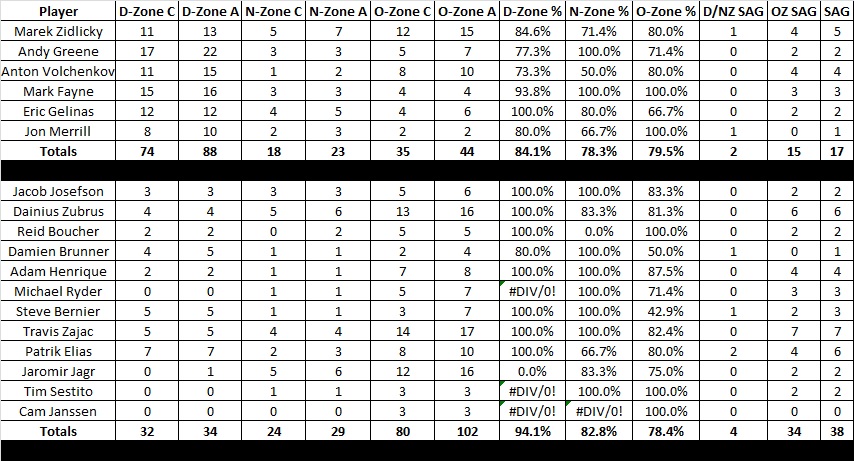 Elias (7), Zubrus (7), and Josefson (8) made the most of their zone exits and finished at 100, 71.4, and 75 PE% respectively. Michael Ryder also had 7 attempts and though he was successfully each time, he only retained possession on 2 of them. Damien Brunner, Steve Bernier, and Boucher all finished at 50 PE% or higher as well. Overall, the forwards were very strong, finishing at 63.2 PE%. In fact, only Ryder, Jaromir Jagr, and Janssen finished below 50%. 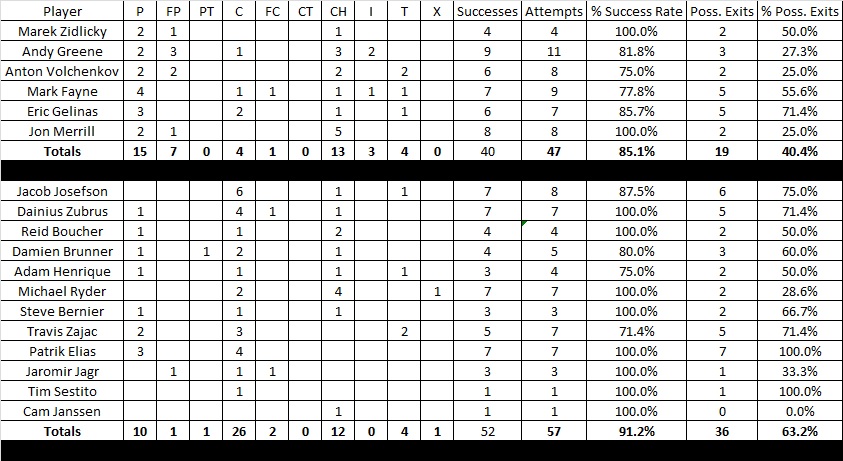