This is a look at the Devils passing and zone exit stats against the Columbus Blue Jackets. Quite simply, it was a game the Devils did well offensively and attempted more passing attempts than almost any game this season.

The Devils went into Columbus and started quickly, but they soon found themselves in a back-and-forth affair with the Blue Jackets. There was plenty of blame to go around, but the Devils really should have put the game away early on due to how effective they were going forward and generating shot attempts off of their passing. Let's take a look at the (mostly) solid performances.

Reid Boucher continues to be effective at generating shot attempts. He finished tied with Dainius Zubrus and Adam Henrique with 4 SAG, good for the 2nd highest total of the forwards, behind only Jaromir Jagr’s 5. Boucher was busy in each zone, finishing 17/21 overall in his passes. Damien Brunner had a good game all around, finishing 17/20 with 1 SAG. Curiously, Travis Zajac failed to generate a shot attempt despite his 12/14 passing.

Michael Ryder and Steven Bernier had similarly effective, but quieter games, generating 2 and 3 shot attempts respectively. And the aforementioned cavemen had their usual games. At least Sestito generated a shot attempt. Janssen pulled a Volchenkov and only attempted passes in the defensive end of the ice.

Of course, Andrei Loktionov’s numbers continue to decline being paired with Tim Sestito and Cam Janssen. One of the best natural passers on the team and he’s playing with cavemen. Great allocation of assets, Deboer.

Individually, everyone but Anton Volchenkov generated at least 2 shot attempts. Andy Greene, Mark Fayne, and Eric Gelinas each generated 4 apiece. Jon Merrill finished 3, and Marek Zidlicky rounded out the group with 2. Volchenkov was the only let down in terms of completion percentage, finishing 10/13 in the defensive zone as he didn’t attempt a pass in the other two zones. It really was an amazing passing display by the defensemen. 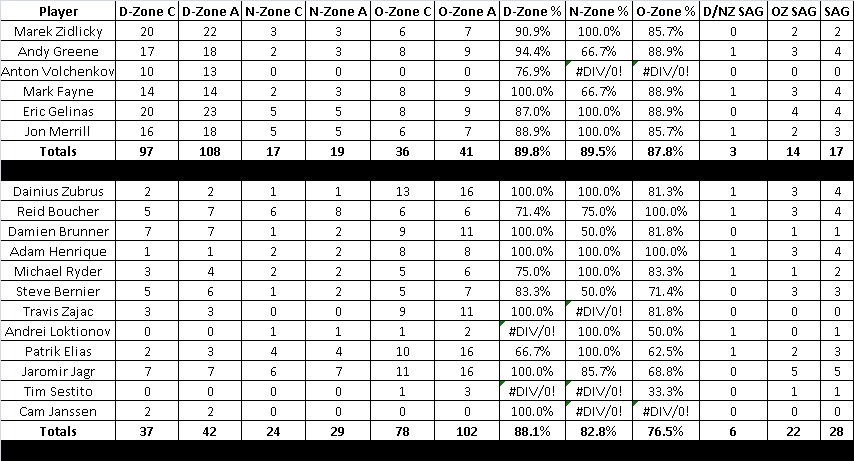 Zone Exit Stats Forwards: The forwards finished at 90.5% overall success and a 52.4 PE%. Good numbers. Boucher again led the Devils forwards in exit attempts with 12, but only 4 of them maintained possession. Michael Ryder had the best night of any forward, successful on all 10 attempts and 7 maintaining possession. Zubrus, Brunner, Bernier, Loktionov, Elias, and Jagr all finished at 50 PE% or higher. Henrique did as well, but it was just the one exit. Sestito attempted 4 exits, was successful on each, but gave away possession each time. Overall, not a bad night.

Defense: As solid as the passing was for the defensemen, the zone exits weren’t terrible, but not as great. The group’s 50 PE% is above the season average, but it was a mixed bag of results individually. Zidlicky had a turnover-free night and finished at 85.7 PE%. Greene had poor night, with 2 turnovers and finishing at 22.2 PE%. Volchenkov committed 2 turnovers and was successful on only 4/7 exit attempts overall. Fayne had a turnover and was underwhelming, but not awful.

The rookies continue to turn the puck over multiple times a game. Gelinas has 2 and Merrill had 3. Granted, they had the highest PE% rates after Zidlicky, but rarely do they go a full game without a turnover. Of course, it’s a byproduct of simply having the puck more, but if there was a way to look up how many goals are scored off of defensive zone turnovers, I’d imagine it’d be much higher than most other ways goals are scored. Collectively, the group had 10 turnovers on the night. 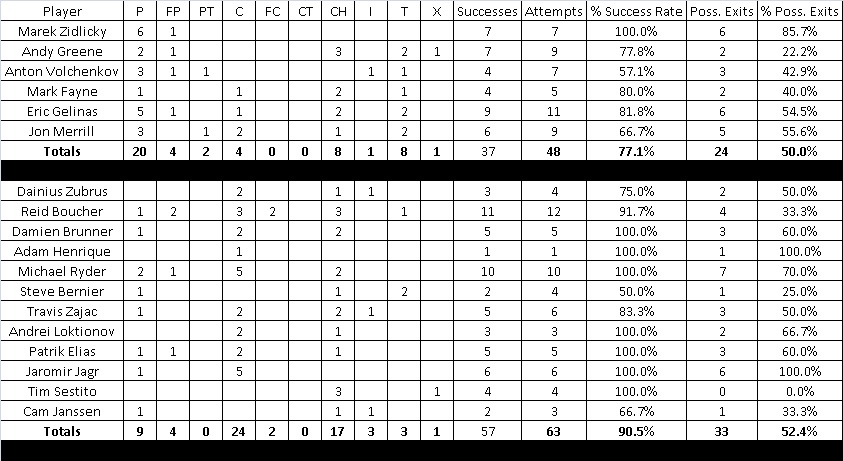