Can the Devils' Offense Turn it Around This Season?

The Devils' offense has been bad to this point, but can they rebound? A look at recent history indicates it's possible, but this team has a lot of improving to do to get there.

Share All sharing options for: Can the Devils' Offense Turn it Around This Season?

As the Devils battle for position in the lackluster inaugural season of the Metropolitan Division, they have been a somewhat mediocre team still searching for some solid footing. Their defense has been very good and the goaltending has been hot and cold but mostly passable overall, but the offense has let this team down, as was the fear coming into the season. Yes, as far back as the summer, even before the Kovalchuk debacle, scoring was projecting to be at least somewhat of an issue this season. Now, with many players underachieving significantly, the Devils' offense has been mostly awful thus far this year.

So how bad do they look, exactly? They are currently 28th in goals-for-per-60 (GF/60) and 29th in shots-for-per-60 (SF/60) in 5-on-5 play. To add to that, they are 22nd in 5-v-4 power play GF/60, despite having the league's 4th highest shooting percentage with the extra attacker. All of that amounts to a simple conclusion: the Devils' offense is kind of a mess right now. They have 69 total GF in 31 games, putting them at 26th in the league with a big group bunched near 70 (Side note: my goodness, Buffalo).

So, is there any hope for a turnaround that puts them at least near the middle of the pack in GF? To get an idea, we can look at past teams who have struggled to score goals out of the gate and see how many of them were able to turn it around and get to at least mediocre by season's end. To start, we'll take a look at teams who have had similarly poor offensive starts. To account for rule changes and style of play adjustments, we'll only look at post-2004-lockout seasons. We'll also trim the shortened 2012-13 season out as it was only 48 games and would mess with projections. The bar will be set at 75 or less goals in 31 games to start a season. 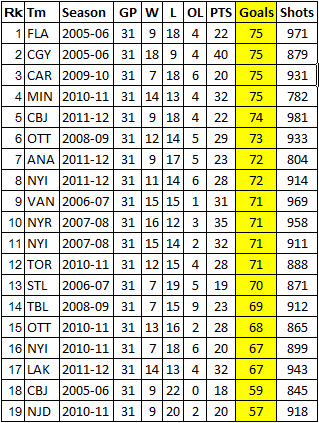 So in the seven-season span between lockouts, a total of 19 teams scored 75 or less goals to start their season. That equates to roughly the bottom 10% in scoring. Though, if the Devils hold Columbus to two or fewer goals in their game tonight, there will be eight teams under 75 goals at that mark in this season alone. So, already, if you are so inclined, you could say that the Devils will benefit from the fact that a lot of teams stink at scoring this season (also, I'm not sure the shortened goalie pads are doing very much), but I digress.

So what's a good target to be aiming for? In my scoring projections back in July, I projected a meager 203 goals for the Devils. That is really a sub-mediocre output, but the Devils aren't even on pace to reach that mark right now. Granted, that projection was with Ilya Kovalchuk, but it was also without Jagr, Zidlicky, Brunner (ha), and Gelinas. So let's see how many of the teams in the sub-75-GF group managed to rebound to collect 203 or more goals in a season.

The good news for Devils fans is that, of these 19 teams, 13 eclipsed the 203-goal threshold by season's end. So there is ample hope that they can at least generate enough offense to pass my underwhelming prediction. To throw a little cold water on that, though, it's not as if the Devils are being thwarted by awful percentages this season. They have generated fewer shots on goal through 31 games than any of the teams listed above. Unless they can build their shot totals up, they are going to continue to struggle to score goals unless they start to get very hot shooting the puck.

So teams can easily break that very low bar of 203 goals with a poor start, but how about getting to the point where they are a middle-of-the-road offensive team? There are 65 teams from 2005-06 to 2011-12 who finished with less than 220 goals in a season, making it roughly the cutoff for the bottom third of the league. Of the original 19 teams listed, only 5 were able to crawl out of their hole to crack the 220 goal mark: 05-06 Florida, 05-06 Columbus, 06-07 Vancouver, 09-10 Carolina, and 10-11 NY Islanders. So of those five, two were from the 05-06 season where an increase in power plays was inflating goal numbers and the other three had registered between 125 and 200 more shots than the Devils at this point.

So, a number of other teams have turned it around on offense coming off the kind of start the Devils are having, but the ones who made it even to the middle third of the league aren't that many and all of them probably had more going for them on offense than the Devils do right now. The Devils overall shooting percentage in all situations is right at the center of the league right now, so they can't really count on regression helping them out at all. The bottom line is that they need players to step up their game on offense and figure out a way to get more rubber on net. Guys like Zajac, Henrique, and Brunner need to pull a little more weight, to name a few, and the defense needs to continue to contribute like they have been the past month-plus if they hope be any more competent in the opponents' ends going forward. Getting back a healthy Ryane Clowe probably wouldn't hurt either, as he was someone they were counting on producing coming into the year.

To be frank, I'd be a little surprised if this team was able to crack 200 goals, but, at the very least, most teams were able to rebound from starts like this to reach that plateau in the past. The only way the Devils are going to get there, though, is to either attack more or hope for a 2012-13 Leafs-level hot streak for the remainder of the season. Based on the offensive prowess displayed to this point, I'm not sure we should be holding our collective breath for either. Pray for lots of 2-1 results, folks.