This is a look at how effective the Devils were in the passing and zone exit phases of the game against the Buffalo Sabres. It was only some bad luck that prevented us from seeing more celebrations like Andy Greene above; the Devils controlled most of the game.

In a game played mostly in the Sabres end, the Devils had 54 more pass attempts in the offensive zone than they’ve been averaging this season. This was one of those games we’ve seen the Devils dominate everywhere but the scoreboard. Fortunately, it had a happy ending in OT. Let’s take a look at how the Devils dominated the Sabres and who were the standouts.

5 forwards attempted more than 10 passes in the offensive zone: Dainius Zubrus (18!), Patrik Elias (15), Travis Zajac (14), Adam Henrique (13), Andrei Loktionov (11) and they combined to generate 18 shot attempts. Those 5 forwards alone nearly equaled the forward’s group average for SAG this season. All but Cam Janssen generated a shot attempt. The forwards had 37 more attempted passes in the Sabres’ zone than their season average. They basically had a game-and-a-half’s worth of passes in this one game.

Unfortunately, the Devils passing in the neutral zone was terrible (62%), breaking up attacks before the Devils could get back into the Sabres’ zone.

Each defenseman generated at least 1 shot attempt for a group total of 9, 3 more than their season average. They also more than doubled their season average of attempted passes in the offensive zone. Unsurprisingly, the group finished with 25 fewer passes in the defensive zone than their averaging this season. Territorially, the defensemen made their presence felt in the offensive zone plenty in this game.

Eric Gelinas and Jon Merrill were great facilitators of the action at the Sabres’ end of the ice. Mark Fayne, Andy Greene, and Marek Zidlicky were involved plenty as well. Anton Volchenkov was the only defenseman to attempt fewer than 10 passes overall as he only had 5. Overall, a strong, offensive performance from the blue line. 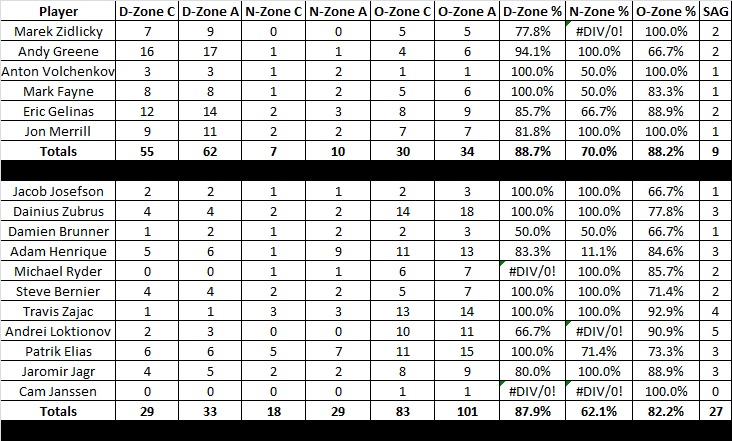 Jacob Josefson had a 100 PE% on his 4 attempts. Dainius Zubrus (85.7 PE%), Patrik Elias (80 PE%), and Steve Bernier (80 PE%) were the nest highest forwards. Andrei Loktionov and Adam Henrique were poor, finishing at 33 and 25 PE% respectively. Collectively, the forwards averaged 62.1 PE%, which would be 14% higher than their season average. Based on recent game results, I’d expect some of these averages to creep up when I do my 30-game review.

The night could have gone even easier for the defense if they’d been just a bit sharper at their zone exits. They attempted 5 fewer exit attempts than the group’s average thus far this season. They finished at 50% on the nose with Greene the standout at 66.7 PE% at one end, and Zidlicky at 20 PE% at the other. 7 turnovers were committed, and most of the Sabres offense came from these mistakes. The Devils could have made this game even more one-sided had they take care of the puck a bit more. 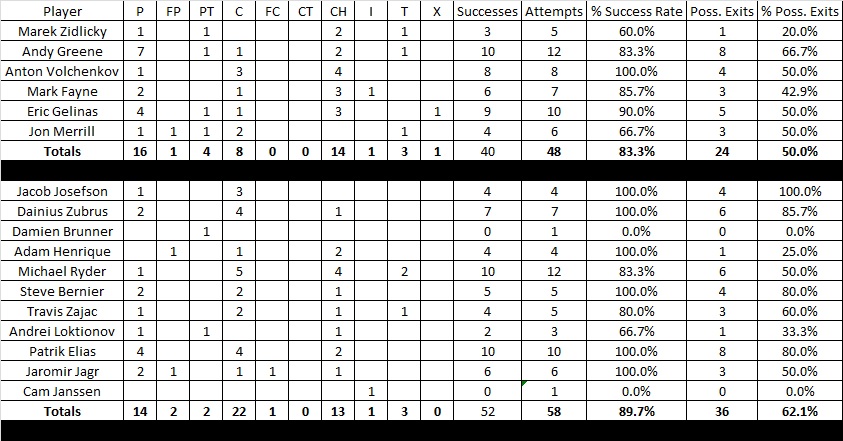 How do these stats help your viewing of the game? Are you noticing the Devils controlling more of the territorial play? Having read these for 27 games now, what are your thoughts on passes and zone exits?