"You want 3 points from me tonight? You got it." The New Jersey Devils put on a passing clinic against the Carolina Hurricanes. Their zone exits weren't so bad either. The final score accurately reflects how efficient the Devils were in this game. How many times have we been able to say that this season?

The Devils out-worked, out-attempted, and out-passed the Hurricanes in a rematch from Wednesday night. The Devils came out and played a strong first period that could have seen them score a few goals. A familiar refrain started to play as the Devils saw the Canes score two goals in the middle frame, leaving them down 2-1 going into the third. Cam Ward was on his game and it looked like more disappoint. It was not to be as the Devils started finding the back of the net and thumped Carolina 5-2.

Mattias Tedenby and Jacob Josefson had efficient passing games, only missing one passes between them and generating 4 shot attempts combined. It was a rare night with no SAG for Dainius Zubrus. He was the only forward not to generate a shot attempt, which was bizarre, but that’s how it goes sometimes.

The highest SAG for the night? Ryan Carter. He completed 5/6 in the Canes end of the ice, generating 4 shot attempts. Needless to say, the bottom 6 played, collectively, one of their best games of the season and they look vastly improved without Cam Janssen or Stephen Gionta in the lineup.

Patrik Elias looks to be back into form, completing all 16 passes he attempted and setting up 3 shot attempts. Jaromir Jagr’s accuracy was a little off, but he matched Elias in terms of SAG production. Travis Zajac attempted the most passes in the offensive zone with 14, completing 12. Adam Henrique and Steve Bernier had similar games as they both attempted 15 passes spread quite evenly in all 3 zones.

The defensemen nearly doubled their season average in terms of pass attempts in the offensive zone. Andy Greene missed only one pass all game and generated 4 shot attempts. Eric Gelinas and Marek Zidlicky each generated 2 shot attempts, as these 3 defensemen accounted the all the SAG production from the blue line. Zid and Gelinas attempted 8 passes in the ‘Canes zone, completing 6 each. Aside from Zid misfiring on 4 passes in the defensive zone, it really was a solid performance passing-wise. 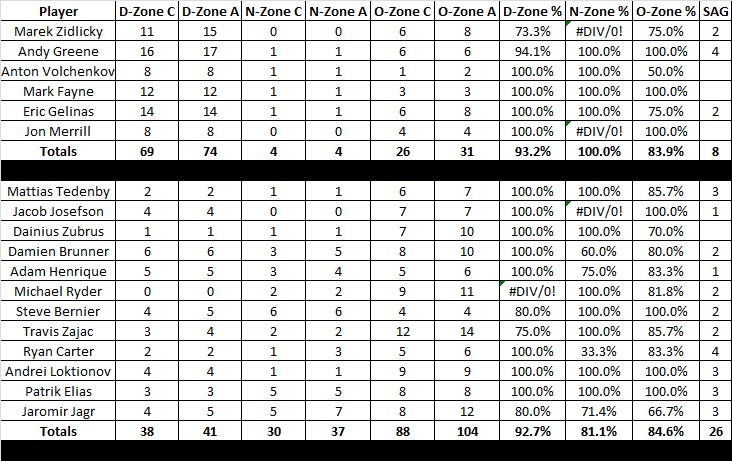 Adam Henrique led the forwards with 8 exit successes on 8 attempts, finishing with a 75 PE%. Jacob Josefson had a solid night in the zone exit department, finishing with 83 PE% on his 6 attempts. Steve Bernier had good overall success game, but only 3 of his 8 attempts maintained possession. Ryan Carter had a solid zone exit game in addition to his passing stats: 6/6 with 66 PE%. Collectively, the forwards finished at 68.6 PE%, nearly 20% above their season average. Defensemen:

Continuing from the passing praise for the blue line, there were only 2 failed passes (Zid and Greene) and no pass turnovers. Zid, Greene, and Gelinas each committed 2 turnovers as the PE% was full of highs and lows for the defensemen. Jon Merrill had 3 attempts that were all successful possession exits. Mark Fayne had the best night, with a 70 PE% on his 10 attempts. Anton Volchenkov did his usual great OS%, but low PE%. Eric Gelinas had a lousy game by zone exit standards. 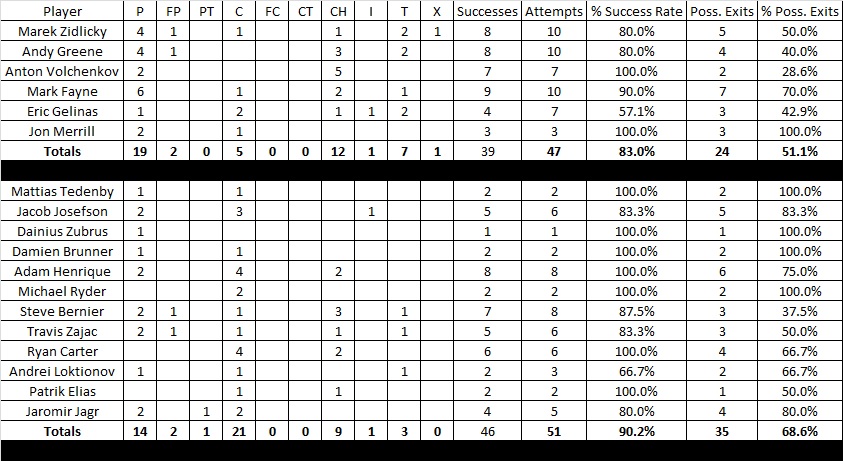