Earlier this week, Cory Schneider expressed unhappiness about not playing as much as Martin Brodeur. The numbers show Brodeur has been very good through of most of November, though that time may be now over.

Earlier this week, there was a brand new story. Cory Schneider was not happy. He was not happy about playing, recalling his time in Vancouver in this Wednesday post by Tom Gulitti. Fans were not happy that he didn't start Wednesday's game against Carolina, whereas Martin Brodeur got his third straight start. As it turned out, Brodeur didn't have a good game against the Canes. He gave up two soft goals and I think if Schneider was in net, then the team could have won the game. Though, I did understand the decision to have him start that game.

It's a turnaround from what was being said a little over a month ago. Back on the week of October 25, Schneider got three straight starts. Martin Brodeur was telling Gulitti that he wasn't pleased at not seeing the ice either on October 23, in between Schneider's second and third consecutive starts. He also stated that it appeared that Schneider was the starter. As it turned out, Schneider didn't have a good game in his third straight start as both goals allowed in regulation were entirely stoppable. I did understand the decision to have him start that game, though.

He also picked up a "lower body injury," announced on the following day. That meant Brodeur got a few games in a row until he returned. That's when Brodeur was able to not only get back in net but also make a strong case to get in more often. From the last game in October until the beginning of this week, Brodeur was hot. 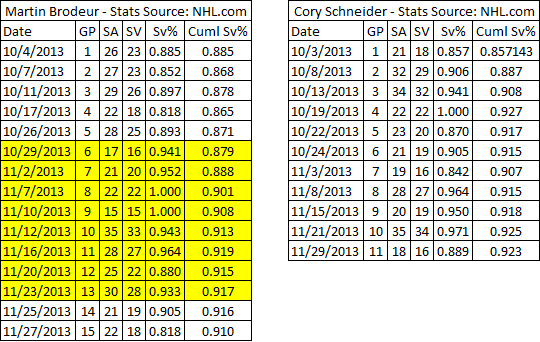 And for a complete picture, here's their even strength save percentage game-by-game: 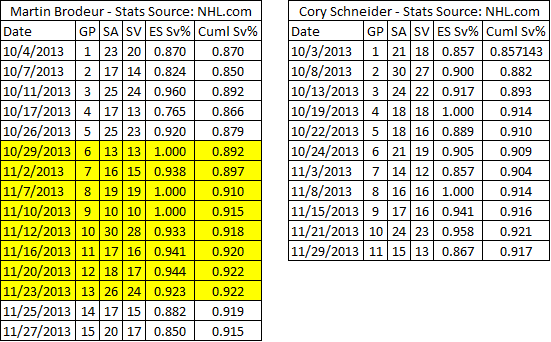 After going through each goalie's game log at NHL.com, I decided to put a running total of their overall save percentage, known in these charts as the Cuml. Sv%. You can see how Brodeur got so hot in November. Just look at the eight highlighted games in both charts.

From the Tampa Bay game on through the San Jose game, Brodeur only let up ten goals in eight games. How those ten got in doesn't really matter much in the bigger picture. Just that Brodeur stopped a lot of pucks. In every game, Brodeur did his job very well to give the Devils a chance to win. Whether the skaters did, well, that's another story. He only got beaten more than twice once, in Anaheim, and that one was bookended by two quality performances. In that eight game run, Brodeur's overall save percentage soared from a terrible 87% to a more solid 91.7%. His even strength save percentage jumped from a poor 89.2% to a great 92.2%. If it wasn't for Schneider standing on his head in Los Angeles, then the two would have near identical overall save percentages. But at even strength, Brodeur surpassed Schneider even with that game. Again: Brodeur was hot for most of November. 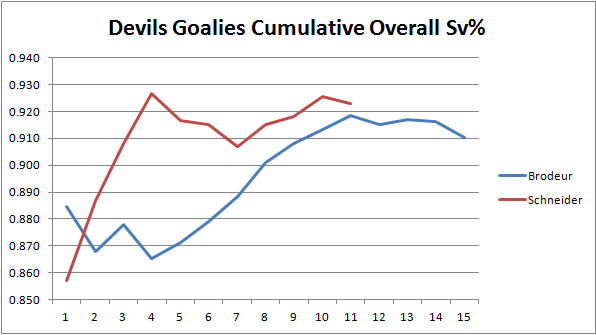 And here's the even strength save percentage graph (Note: the horizontal axis are games played): 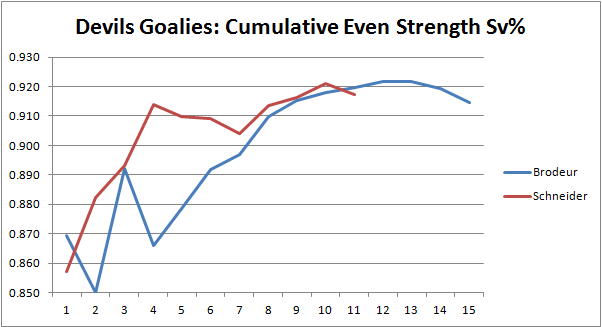 These graphs don't just shot Brodeur's rise, but also his fall. Brodeur's hot streak really got killed on Wednesday. However, both graphs show Brodeur's percentages dipping with the Winnipeg game on Monday. Brodeur did give up a soft goal, but any percentage is going to look worse when two goals are allowed on a relatively low number of shots. Brodeur's thirteenth game (the San Jose game) and fourteenth game (that Winnipeg game) shows off how stark it could be. Regardless, giving up two goals isn't that bad of a night from a goalie in general. One would hope a team could match or exceed that on the scoreboard. Given that the Devils lost 2-1, they did not; and so concern after the game was rightly placed on the lack of scoring. He was not so bad that he was significantly worse than Schneider. While going 19-for-21 (or 15-for-17 at evens) cuts a cumulative save percentage, it's not necessarily indicative of a performance going south. Just like Schneider going 16-for-18 (or 13-for-15 at evens) on Friday night doesn't mean Schneider is a liability. So giving him a third straight start doesn't seem out of place in that perspective. Wednesday's game in Carolina, on the other hand, definitely proved otherwise by both the numbers and the eyes. But that could only be faulted in hindsight, which no one actually has until, you know, it's already happened.

Schneider's unhappiness is understandable but there are two ways he gets more games. The first is that Brodeur gets hurt and therefore Schneider plays by default. The second is that Brodeur plays poorly and therefore Schneider is in because he gives the team the best chance to win. However, neither are worth cheering for. If Brodeur is unavailable by way of injury, then we have to hope Schneider remains really good because going to the third stringer isn't a comfortable option. If Brodeur sucks, then the team must have lost some games because of it. That is obviously not good for anyone. As much as I enjoy Schneider in net, all I want from a goalie is to give the Devils' skaters a chance to win. I'll be concerned about Schneider's happiness next season, which is the earliest the Devils can talk to him about a new contract anyway (and I doubt he's so petty that he's going to hold a grudge over November 2013 over a year from now in the face of millions of dollars).

Besides, it's not as if Schneider has been totally idle. Hot streak or no hot streak, DeBoer has correctly split the vast amount of back-to-back games so far this season. In November, Schneider has appeared in the back-to-backs in part of how well Brodeur's been playing. It could easily turn around now, but even so Brodeur won't be sitting for too long. The Devils have them at the end of the next five weeks. Either goalie may sit for up to a week at most.

In any case, it's clear what the way forward will be this season. Schneider will do well until he doesn't, then Brodeur will get his chance to take advantage. Brodeur has done well in November until recently, so now he may have to sit. As long as both goalies aren't so bad (in that case, it still wouldn't matter), the team should be fine in net this season. I'm fine with that and maybe you are too. Peter DeBoer, Lou, and the rest of the Devils coaches and amanagement will certainly be fine with that. The goalie who gets to sit may not be, but they'll have to be professional about it and deal with it. It's not a bad situation to have, really. As far as the notion of getting pucks in the other team's net, well, that remains to be a problem and a discussion point for another time.