In what was another effective passing game and zone exit success, the Devils found themselves trying to climb out of yet another hole. At a time when some Devils are on the bubble of the lineup, let's take a look at who we might see again on Friday.

Dainius Zubrus, Travis Zajac, and Jaromir Jagr continued to dominate, combining to generate 14 shot attempts and going 34/42 in the offensive zone as a line. Jagr was a little off in each zone, and his SAG numbers have dropped a bit recently, but the line as a whole continues to put up impressive numbers each game, no matter the competition.

Mattias Tedenby played a decent passing game, generating 3 shot attempts and completing 9/11 overall. Jacob Josefson was less effective, going 7/10 overall with 0 SAG. He was more effective in the zone exit phase of the game tonight. Adam Henrique only completed 12/18 passes tonight, with most of his misses coming in the offensive zone. Once again, however, he was the most active in the defensive zone. He generated 1 shot attempt.

The totals for all stats tonight are close to season highs, or exceeding averages considerably. This is partly due to the limited special teams play as these stats are only 5-on-5.

Jon Merrill actually attempted the most passes in the defensive zone (20). Each defenseman had at least 12 attempts and as a group they were 18 over their season average, indicating they spent significantly more time in their own zone than normal. The accuracy wasn’t bad, but the volume was much higher than previous games. Collectively, the group did very well in the offensive zone as they contributed 16 SAG, nearly 10 marks higher than their season average. A very busy game in both ends.

Peter Harrold and Marek Zidlicky misfired a bit in the offensive zone, but it’s a good sign of how active the group was as no defenseman attempted fewer than 4 passes in the Carolina zone. Andy Greene had the best night as he completed each pass he attempted. Mark Fayne and Harrold led the way with 9 combined SAG. Eric Gelinas and Jon Merrill combined for 5. 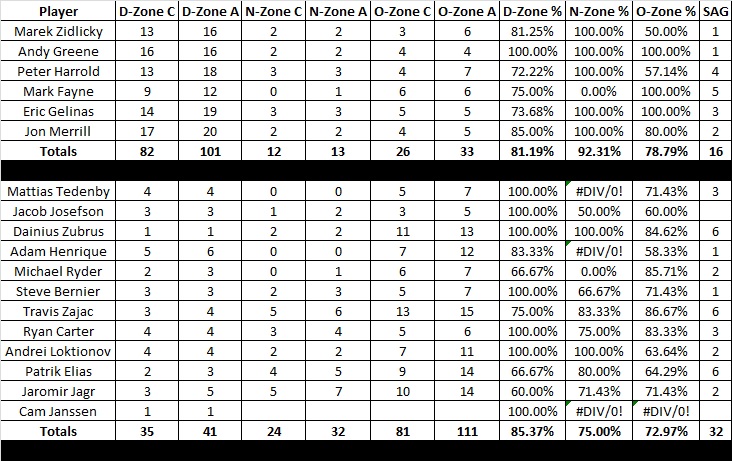 Jacob Josefson had a stellar night, exiting with possession 71.4% of the time and he was successful on each attempt overall. Ryan Carter had a solid game, finishing at 83% overall and with possession. Jaromir Jagr bossed it in the defensive zone, successful on all 8 attempts and a 75 PE%. Adam Henrique, Dainius Zubrus, and Mattias Tedenby each finished at 50 PE%.

Another game of tracking zone exits, another game of seeing up close and personal the inefficiencies of Peter Harrold. Harrold had a 31 PE%, a 50 OS%, and 8 turnovers. 8. That’s easily a season high for anyone. Think about it this way: Adam Larsson, in his 20 games played, has 25 turnovers. Harrold had 8 in one game. Harrold is consistently the worst on the blue line by far at these metrics. If Deboer keeps him in the lineup once the Devils are healthy on the back end, my head might explode.

Mark Fayne had an okay game, committing 2 turnovers and 2 icings. He had some positive moments, but was inconsistent. Marek Zidlicky had a mixed bag: when he had successful exits, all of them were with possession, but when he failed, he either turned the puck over (4 total) or iced it. Classic risk-reward with Zid.

Andy Greene, Eric Gelinas, and Jon Merrill were head and shoulders above their fellow defensemen. Gelinas had a 62.5 PE%, and both Greene and Merrill had a 75 PE%. They only had 4 turnovers between them. Solid performances from those three. 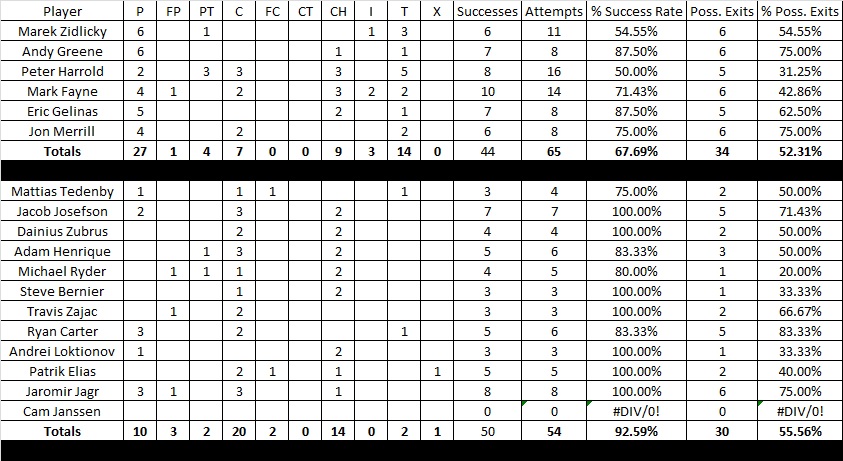