This is a look at how the New Jersey Devils fared at zone exits and how effective their passing was. Both were very good against Winnipeg, and should have resulted in a win.

The New Jersey Devils played a high-event game against the Winnipeg Jets. They posted some of their most efficient stats for zone exits and passing. This led to lots of shot attempts, but due to a high amount of blocked shots and less-than-desirable passing accuracy in the offensive zone, it left the fans wanting, and perhaps expecting, more from the Devils. In the end, it wasn’t enough as the Devils fell 3-1. In this article, we’ll take a look at the game through zone exits and passing stats.

Overall, this was one of the Devils forwards’ most productive games. Every forward not name Cam Janssen had at least 1 SAG. Unfortunately, it was also one of their more wasteful games as the forwards finished 11% lower than their season average in terms of offensive zone completion percentage. The usual forwards were busy in the offensive zone, but the accuracy wasn’t there to capitalize on the Devils’ possession. In the other two zones, the Devils finished above 92%, which would be season highs.

In the defensive zone, Andy Greene was the busiest, going 15/20. Mark Fayne had fewest pass events, going 6/6, but he had the most in the neutral zone, finishing at 5/6. Eric Gelinas had a rough night in the defensive zone, but was 2nd only to Zidlicky in terms of offensive zone efficiency, generating 3 shot attempts. Peter Harrold had a decent game, generating 2 shot attempts. Jon Merrill played well, missing on only 1 pass all game, finishing 16/17. 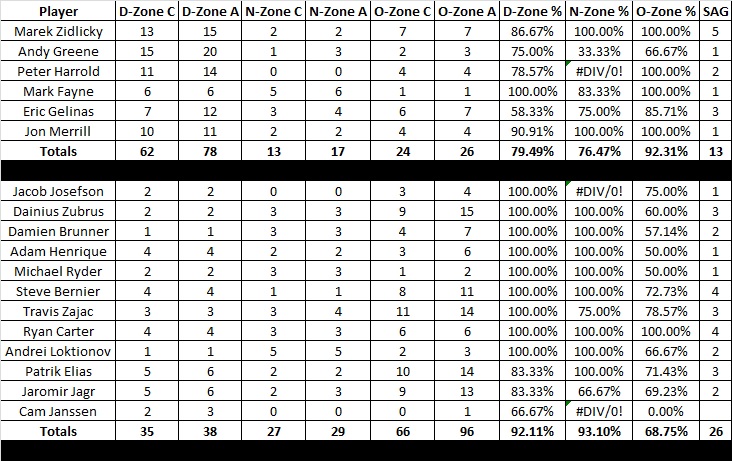 Each completed pass, or tipped pass on goal, that results in a shot taken by a teammate counts as one “shot attempt generated” or “SAG” in the chart below. This is tracked to attempt to determine which teammates are better at generating opportunities to shoot.

Zubrus, Zajac, Elias, and Jagr all had at least 5 carries, and contributed to a season high 75.5 PE% for the forwards. Based on season averages, the forwards attempted about the same amount, so it was simply a very efficient night. Andrei Loktionov finished at only 57 PE%, which would be great on any other night, but was one of the lower percentages. Henrique finished at 50%. No finished lower than that, which is amazing.

This was one of the best games the defensemen played in terms of zone exits and keeping possession. Unfortunately, it was also one of their busier games as they had 10 more successes and 11 more attempts than their season average. So, while they were incredibly efficient (61.3 PE%) they spent more time than they should have in their own zone.

Mark Fayne was 100% all around, but only had 2 attempts. Eric Gelinas and Jon Merrill had very good games, going 9/10 and 10/11 overall, and finishing at 70 and 72.7 PE% respectively. Andy Greene had a very solid game as well. Marek Zidlicky and Peter Harrold had a few turnovers, but otherwise played well. Harrold, on a night where the defensemen collectively averaged 61.3 PE%, still couldn’t finish higher than 45%. 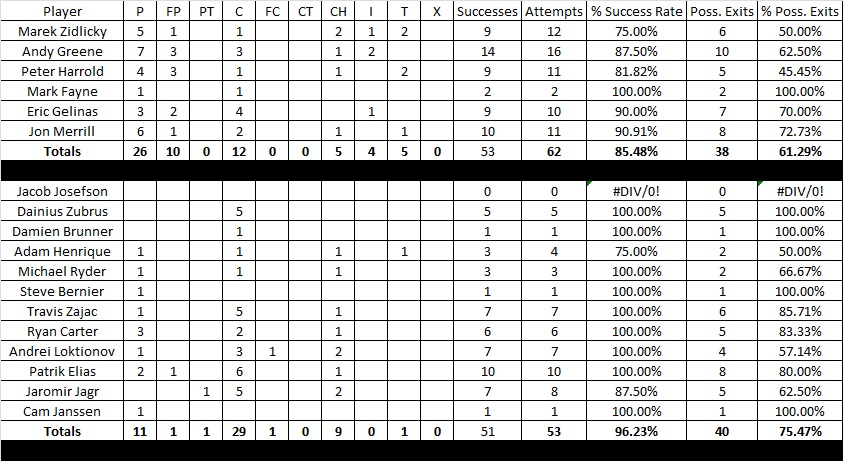 Every 10 games or so, I’ll post a separate article looking at overall play up to that point.

What reactions do you have to this data? What's your feeling on it? Does it match your thoughts during the game?