The Devils were pinned back early and often against the Sharks. The Devils played better as the game went on, but settled for a 2-1 loss. This article takes a look at how the Devils poor zone exits doomed them early on, and evaluates their passing stats for the game as well.

Jacob Josefson had a busy night in the defensive zone, completing 5 of 7 passes. He wasn’t as active in the other zones and failed to create a shot attempt. Dainius Zubrus generated 1 shot attempt on 7 of 9 passing in the offensive zone. Patrik Elias had a strong game, completing 7 of 10 passes in the offensive zone and generating 4 shot attempts. He and Jaromir Jagr (3 SAG) accounted for nearly half of the forward production. Jagr had his usual busy night in all three zones.

Travis Zajac and Adam Henrique each had 1 SAG and were active in both zones. Damien Brunner only completed 3 passes on his 7 offensive zone attempts, but he did generate 2 shot attempts. Steve Bernier continued to put up effective passing numbers: 4 of 5 in the offensive zone (6 of 9 overall) and generated 2 shot attempts. Stephen Gionta only had 1 pass attempt in the neutral zone before exiting with an injury.

The defensemen were split in terms of good performances and not-so-good performances. Eric Gelinas and Mark Fayne didn’t miss a pass all night, while Andy Greene only missed one in his own zone. Of course, none of one generated a shot attempt. Adam Larsson, Marek Zidlicky, and Peter Harrold all each generated one shot attempt apiece, but their passing was quite inconsistent. All three were between 69 – 71% in their own zone. Zidlicky and Gelinas were effective in the neutral zone. 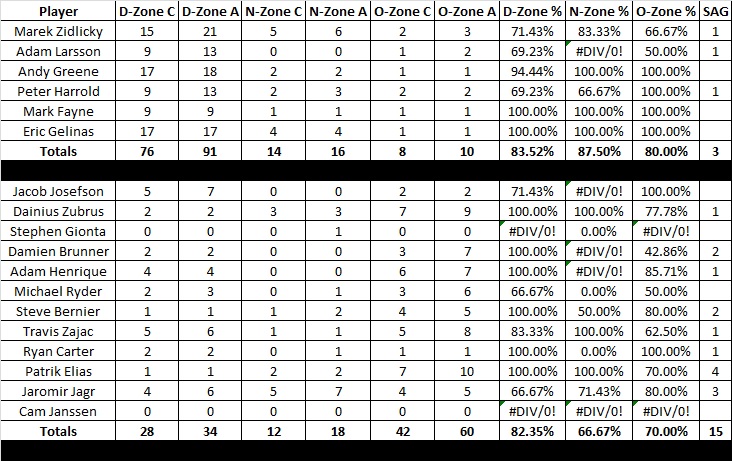 Each completed pass that results in a shot taken by a teammate counts as one "shot attempt generated" or "SAG" in the chart below. This is tracked to attempt to determine which teammates are better at generating opportunities to shoot.

Zubrus had a strong night, finishing with a 70% possession exit percentage. It was a high-event game (61 for the forwards, 55 for the defensemen) regarding zone exits as the Sharks continually pinned them in. Michael Ryder also had a strong night, finishing with an 85% possession exit percentage (highest on the team). Zubrus, Ryder, and Jagr (66%) were the only forwards to finish on the plus side of 50%.

The defensemen had a combined 14 turnovers, which is atrocious. Zidlicky accounted for 6 of those, so John was right to express concern with Zid’s defensive zone play in his recap. The overall success rate for the team was only 70%, which indicates a struggle to clear the zone, let alone exit with possession (45% for the group). Larsson and Greene accounted for 3 turnovers each; Harrold and Gelinas each had 1. Mark Fayne was the sole defender to escape relatively clean. He was successful on each zone exit and had a 60% possession percentage (tied with Gelinas for highest among defensemen). Greene had a 55% rate and Harrold was last once again. 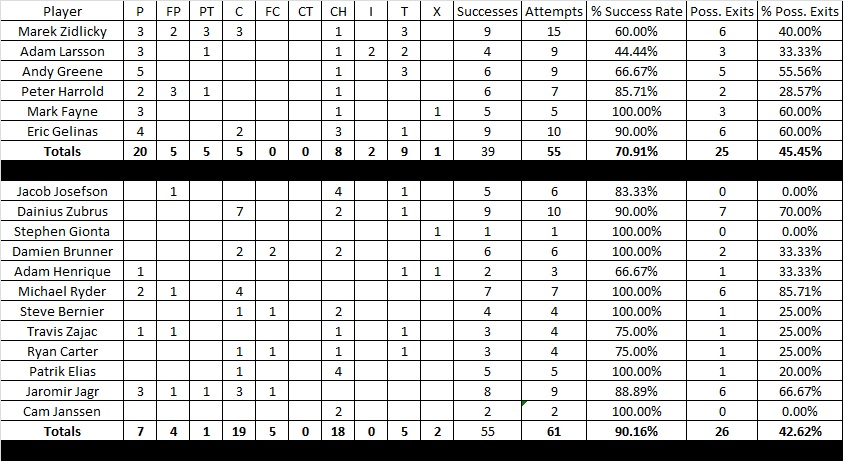 Every 10 games or so, I’ll post a separate article looking at overall play up to that point.

Your thoughts: What do you think of this data? Does it enhance your understanding of the game? Any confusion? Any suggestions? Please sound off and let me what you all think!