Share All sharing options for: Looking Forward to November

The New Jersey are off to a rough start in October. Their October record was 3-5-4 for a total of 10 points out of a possible 24. Now that Halloween has passed and baseball is over, the Devils will begin their second month of the season. I'm going to break down the schedule and point out how the Devils can succeed in November. 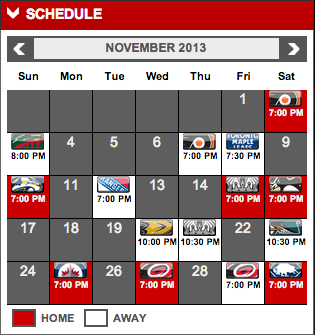 The Devils will have six divisional games, two versus the Flyers and Hurricanes and one each versus the Rangers and Penguins. It is well documented that the Metropolitan division has been a disaster, except for the Penguins. All in all, these games are very winnable for the Devils.

The Devils will have four back to backs with only one of the back to backs both at home. Of these sets of game, all of the opponents had very good Octobers and look like strong teams. These back to backs sets are going to be tough on the Devils, but they will be key to the Devils advancing in the standings.

The Devils will be heading West again to visit Anaheim, Los Angeles, and San Jose in four days. While West coast games are not key to the Devils moving up in the standings, it would be nice for the Devils to get a few points out of these games.

The Devils will visit the Wild and Zach Parise this Sunday. They will also play the LA Kings both at home and away. Sort of a rematch of the 2012 Stanley Cup Finals. Late in the month, the Devils will play a home and away against their new divisional rival, the Carolina Hurricanes. The last game that may have some interesting twists would be the Ducks game in which we could see Teemu Selanne and Jaromir Jagr play their last games against each other! All in all, it should be a great month for Devils hockey!