Damien Brunner scored the New Jersey Devils' first goal of the 2013-14 season. This breakdown of the play that led to the goal shows three breaks that benefited the Devils along with good decisions by the Devils' forwards.

I made the decision to do a goal breakdown of the very first goal scored by the New Jersey Devils this season.  I expected it to come in their first game at Pittsburgh.  That didn't happen as the team was shut out.  Fortunately, the drought did not last much longer.  It ended 2:58 into their home opener, their second game of the season against the New York Islanders.  The fans were quite pleased until they heard an awful and unfamiliar song.

The goal itself was scored by Damien Brunner and it was the first of the game.  It was not one of the prettiest goals ever as Brunner just stretched into the crease to knock the puck in.  A lethal poke, if you will.  Closer examination does make the goal more appreciable. The Devils something they didn't get on Thursday and throughout much of 2013 season: breaks.  The breaks did not come out of thin air either.  The play leading up to the goal was good, the zone entry was solid, and the players took advantage from what the Isles gave them.   So let's take a closer look at the first goal of the 2013-14 season.

The Situation & The Goal Video

It was even strength hockey in the first period and the score was 0-0. Andy Greene officially blocked a Matt Martin shot and the Devils recovered the puck in their end.  The video and the breakdown will begin there.   Here's who was on the ice:

The video from NHL.com is a bit different this year.  Pausing it brings up a giant blue play button in the middle and a bunch of sharing icons appear.  Useful for sharing and not bad for general viewing, but not for taking screenshots.  I've done my best to capture the important events.  In any case, here's the video:

So we begin with the Devils recovering the puck in their own end.  Andrei Loktionov got the puck inside the right (far) circle and he will pass it out to Dainius Zubrus.  He's wide open on the left (near) side at a minimum, he should make a clean exit out of the zone. 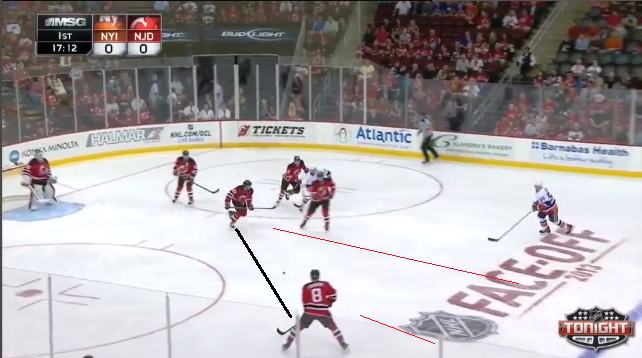 Right after the pass, Loktionov skates forward to the middle of the neutral zone.  This will be important in a bit.  Zubrus does get the puck over the blueline but it won't be long before an Islander meets him. 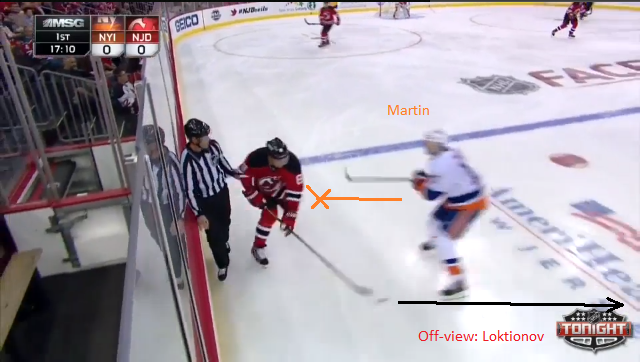 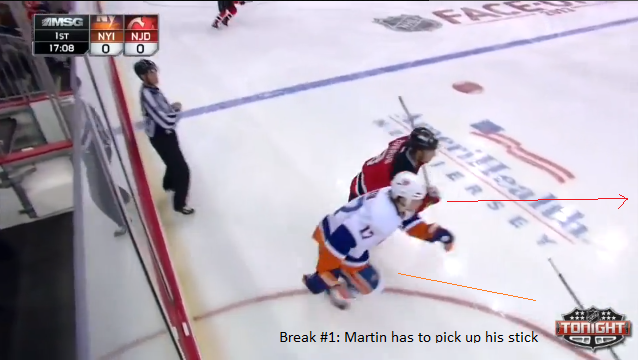 Martin's not wrong to go for the hit as he at least forced Zubrus to make a play on the puck.  But the Devils get their first break from it.  Martin loses his stick on the check.  It popped up away from his hands and fell forward.  Live, I wasn't quite sure how Zubrus was able to skate away from Martin so easily from the hit.  Zubrus is a big man and he's been checked countless times in his career.  He's not particularly quick but it's clear here how he was able to separate so easily from Martin.  Because Martin's stick got away from him, he's going to go and pick it up.  This allowed Zubrus the space to skate away from him. 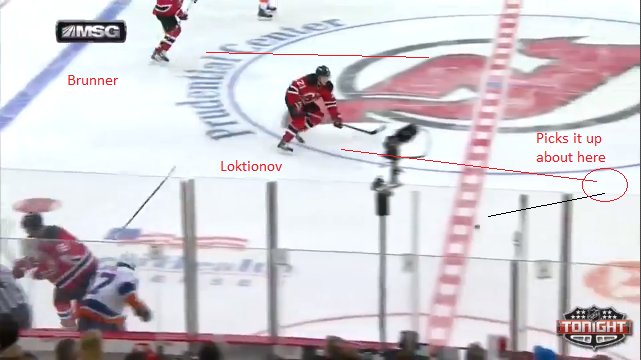 Meanwhile, Loktionov has all kinds of space in the neutral zone.  He was right to skate ahead after his pass to Zubrus.  As Zubrus took the hit (or some of it), he was able to get the puck away.  He put it in a space for Loktionov to go and get it.  You'll notice there are no Islanders in the area.  Their defenders have dropped back and Casey Cizikas was replaced by John Tavares, so the Isles' ace is in his own end.   Brunner is behind Loktionov but he is skating ahead as well. 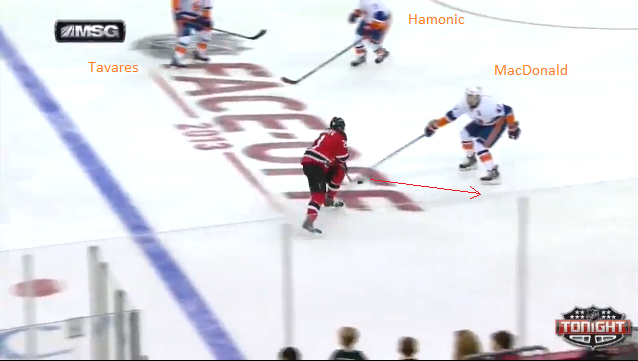 Loktionov carried the puck in the zone easily and he's met with Andrew MacDonald.  The Isles' defensive pairing is maintaining their shape and they are in good positions.  MacDonald's job is to contain Loktionov.  He's keeping his man in front of him while denying him easy access to the middle of the ice.   Loktionov recognizes MacDonald and his stick stretched out so he's going to head right.   So far, so good for the Isles. 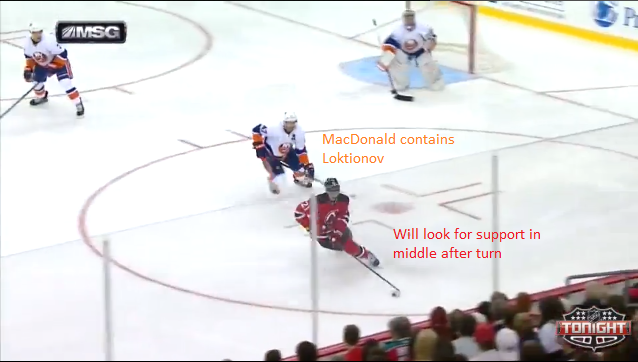 MacDonald followed him back while maintaining enough space to limit Loktionov's options.  This is good defending from him so far.  At this point, Loktionov is no longer the only Devil in the Isles' zone.  He does not know this.  Instead of going into the corner and hoping for some help at the backboards, Loktionov turns around from his location.  By doing this now, he'll be able to see if he's got a teammate open.  If so, he can make a quick pass before MacDonald can step up and deny him. 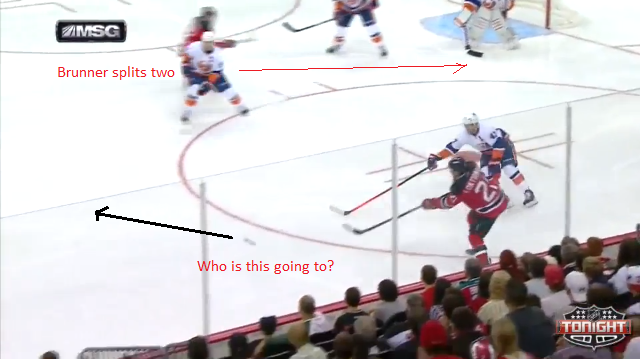 And that's exactly what happens.  Loktionov turned and immediately flung the puck to the middle of the ice.  MacDonald stretches out as if the puck was going to head to the net.  It's a token move but not a bad reaction. He's doing it in case it's going down low.  But that's not where it's going.  Meanwhile, Brunner sneaks in behind Tavares, who dropped down into the slot, and in front of Hamonic.  Hamonic will pick up Brunner as he heads towards the net. 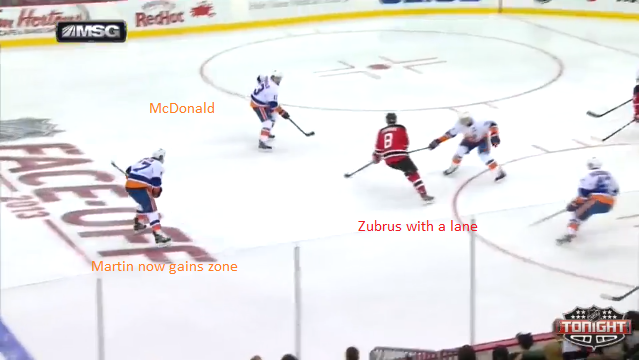 The man Loktionov saw was Zubrus.  You see that Matt Martin just got in his own zone with his stick.  I don't know enough about Martin but I suspect he's not that much slower than Zubrus.  Having to pick up his stick is understandable but it allowed to .  Colin McDonald got back on the far side but he's not in a position to do anything. Tavares is in a good position in the slot and he's got his stick out in the hopes of dissuading Zubrus from going further.  The Lithuanian Freight Train decides not to because he has a shooting lane. 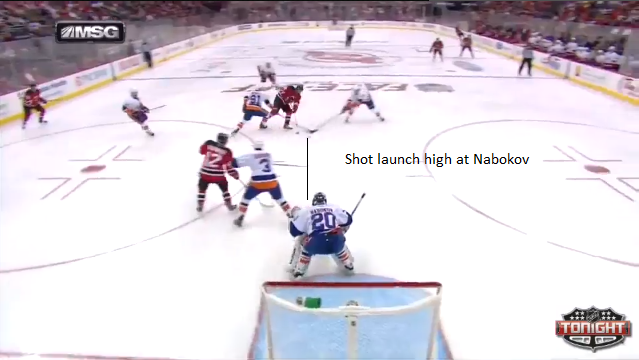 Let's switch to the behind-the-net view from one of the replays.  Zubrus just shot the puck and it's going high.  He got it out in time before McDonald intervened.  Zubrus also got the shot off under Tavares' stick, which is a pretty neat move.  The shot itself shouldn't be trouble for Evgeni Nabokov.  He clearly sees it coming.  There are no sticks or bodies in it's path for a potential deflection. Brunner is the only Devil near the crease and Hamonic has him covered.  He is squared up in his form.  No big deal for the Isles in this moment in time. 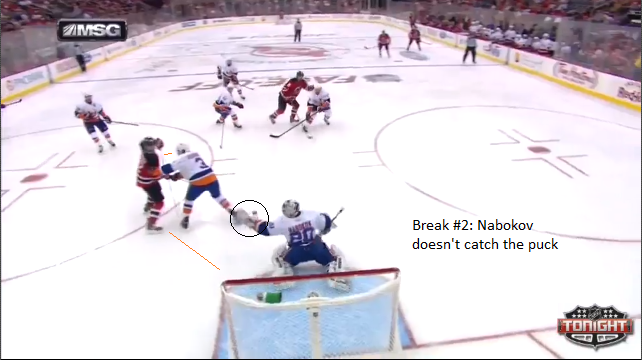 Disaster strikes.  Nabokov misjudged the shot.  He went for a glove save and he mistimed raising his glove.  Nabokov not only doesn't catch the puck but it hits the top of his glove.  Given the velocity of the puck, it will now pop up and goes behind him.   The botched glove save attempt is is a fantastic break for the Devils, the second on this play.

To make matters worse, look at Brunner and Hamonic to Nabokov's left.  Brunner sees what just happened.  Hamonic does not.  Hamonic's body is horizontal and Brunner is vertical in this view. As a result of both, Brunner is able to turn towards the net with his eye on the puck before Hamonic can.  This will lead to the goal. 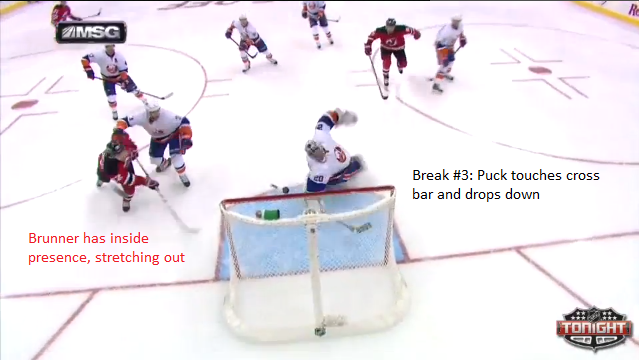 The puck's arc off Nabokov's glove took it to the crossbar.  Physics were lucky for the Devils here as the puck only touched off the front part of the crossbar.   It didn't hit it square such that it bounced out.  It didn't hit the top or back part to have it land on top of the net or go behind it.  And it went nearly straight down, out of the reach of Nabokov who can only see this happen.  It is a very fortunate bounce, the third break for the Devils on this play.

Brunner does well to charge towards the net anwyay.  He's already turned and he's stretching out so he can get his stick out into the crease in anticipation of the puck dropping.  Hamonic now understands what's going on and so he's late in containing Brunner.  He's got one hand on Brunner's back, which does nothing, and one hand on his stick.  He's trying to position his stick to go across Brunner's body.   However, Hamonic doesn't really hook Brunner. He is not impeded. The stick is just there, presumably to prevent Brunner from taking another step closer. 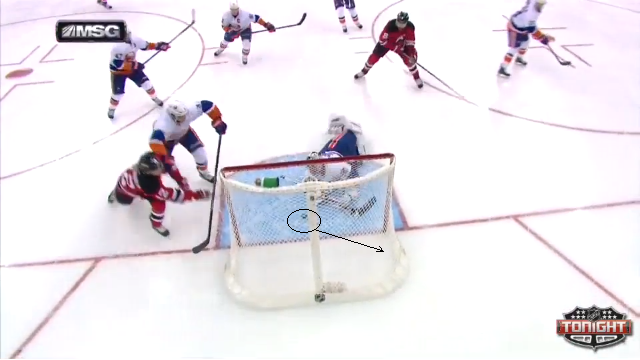 And so Brunner is stretched out and able to get to this puck before Nabokov.  He just pokes it into the net. That's all he could do and all he needed to do.  Brunner scores his and the team's first goal of the season and it was good.

The Devils benefited largely from three fortunate occurrences.  Martin losing his stick off his check allowed Zubrus to enter the Islanders' end with no coverage.  This gave Loktionov an easy pass to the high slot.  Nabokov flubbing the glove save and the puck dropping off the crossbar were critical for Brunner to score.  Nabokov should have grabbed the shot to begin with.  That was the one real error by the Isles in this video.  Martin going for the check was understandable, Tavares wasn't in a bad position and forced a not-so-easy shot, and Hamonic's only fault was not seeing what happened with the shot before Brunner did.  Who could have predicted the puck would follow the path it took. The Devils will not always get these sorts of breaks in games.  So it's good to see the Devils make the most of it.

However, it's apparent that the Devils did more than just have Brunner in the right spot at the right time.  The zone exit was simple and clean.  Zubrus showed good awareness to get the puck away before Martin hit him and then skate ahead to the middle of the ice afterwards.  His shot was good and it turned into a fortunate bounce that I'm sure he didn't expect.  Loktionov calmly picked the puck up in the neutral zone, carried it cleanly into the Islanders' zone, didn't force a play through MacDonald, and wisely turned away to look for help.  His pass to Zubrus was smooth and accurate, putting him in a good position for a shot.  Brunner positioned himself well and his reaction to the shot was quick.  I don't know if he knew he saw it before Hamonic did but he didn't waste any time trying to go after it. His boldness was rewarded with a goal.

Now that you've saw the goal again and read the breakdown, I want to know your thoughts on the Devils' first goal of the season. What part of the play impressed you the most?  Which Devil did you think did the best on the play?  Please leave your answers and other thoughts on the play in the comments.  Thank you for reading.  Hopefully, there will be many more breakdown-worthy goals to come.