This is a look at New Jersey Devils skaters zone exits data from Game 1 until this point in the season. You’ll see three new columns for Games Played (B), Possession Exits Per Games Played (R), and Defensive Zone Turnovers per Games Played (S). These are added to illustrate which players have been most consistent and most productive. All other columns are the same.

If there are 10 categories we are tracking for zone exits, and only 2 of them are possession exits (Pass and Carry), then only 20% of all outcomes will be ideal. It would then make sense to argue that a possession exit rate of 50% or higher would be a positive figure (put another way, if 50% of the time we’re scoring in the top 20%, we’re probably doing a decent job).

So far, I feel 50% would be a positive number and that will be the threshold for evaluation until otherwise noted. With that said, let’s take a look at how the Devils players have performed thus far. 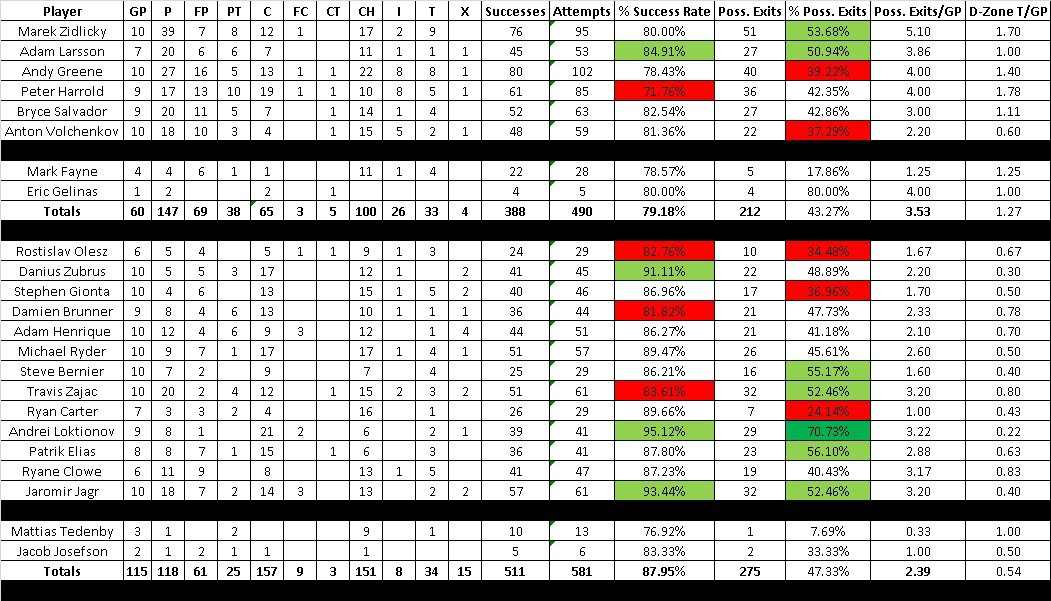 Forwards: Andrei Loktionov’s possession exit percentage is ridiculously high at 70%, 14% higher than Patrik Elias, the next highest forward. Unsurprisingly, Loki’s overall exits at the highest on the team at 95%. He leads the forwards with possession exits/game at 3.22 and has the lowest defensive zone turnover/game ratio at 0.22. Elias and Jaromir Jagr have strong all around numbers as well, and it should be fun watching these three work together for the next 10 games (we can hope).

Travis Zajac is tied with Jagr with a possession exit rate of 52% and possession exits/game. He’s 2nd only to Ryane Clowe in terms of most D-zone turnovers/game at 0.8. Speaking of Clowe, he seems about average in terms of overall %, but less so on possession exit %. He has attempted a lot of exits considering he’s played fewer games than nearly all other forwards, with the exception of Rostislav Olesz, Mattias Tedenby, and Jacob Josefson.

Other new faces, Damien Brunner and Michael Ryder, have had mixed results as well. Ryder almost cracked 90% in overall %, but he hasn’t been as successful regarding possession %. Brunner has the lowest overall success rate among forwards not name Tedenby. He’s slightly above average on the team in terms of possession exit %, but that number could be much higher as he’s tied for the forward lead with 6 pass turnovers. Who is he tied with? Adam Henrique.

Similar to Henrique’s passing stats, his zone exits and possession % started off really well this season, but they’ve tapered off quite a bit. He’s below average among the team in both %s. I still believe that once his line mates are somewhat regular, his stats will improve. Danius Zubrus and Olesz are opposites when it comes to zone exits. Zubrus is among the higher percentages, whereas Olesz is nowhere near as successful.

Lastly, the CBGB line. They’re overall success rate is pretty close: all three are within 3 percentage points of each other. The main difference lies in the possession exits. Similar to the passing stats, Steve Bernier continues to prove he’s carrying the other two. If you add Stephen Gionta’s and Ryan Carter’s possession exit percentage together, they are only 6% points higher than Bernier’s! Bernier has the third highest possession exit % among the team, behind only Loki and Elias.

I’d still like to see Deboer rotate Tedenby and Josefson in on the 4th line with Bernier to make Gionta and Carter earn it based on recent production and play, rather than what they did 18 months ago. What are your thoughts on these numbers? Is there anything you’d like to see them compared to?

Defensemen: Not surprising to see Marek Zidlicky atop the possession exit %. He also has the 2nd highest turnovers/game in the defensive zone, which is characteristic of his play. What is surprising is that Adam Larsson is the only other defenseman (not named Gelinas) above 50%. Larsson also has the highest overall success rate. Granted, he’s attempted the fewest exits in the first 10 games of the 6 to start the most games, but I anticipate the next 10 games will produce a higher total. He has the 2nd lowest turnover rate among defensemen, behind only Anton Volchenkov. Volchenkov has the lowest possession exit %, which surprises no one. His success rate is third highest on the team.

I was surprised by Andy Greene’s low possession exit rate, just two points above Volchenkov’s. I think of Andy Greene as one of the Devils’ all-around defensemen, and his passing stats are pretty solid, but he clearly can work on keeping possession while exiting the zone. Peter Harrold has the worst overall numbers: lowest success rate, average at best possession rate, and highest number of turnovers/game. The Captain’s numbers are underwhelming, but not concerning. He has the 2nd highest overall success %, but his possession numbers are sitting at 42%.

With the addition of Eric Gelinas to the rotation, it will be intriguing to see how the defense pairs continue to play. Does Fayne sit for Salvador when he returns? I think that’s unfortunate, but likely. I believe Deboer wouldn’t sit Volchenkov or Salvador, which leaves Gelinas, Larsson, Zidlicky, and Greene. I’d prefer Salvador-Zidlicky as the veteran pairing and let the Fayne-Greene and Lasson-Gelinas partnerships continue. The next 10 games will be interesting based on how different the defense may look from the first 10 games.

Have any questions? Comments? Suggestions? Hit me up on Twitter at @RK_Stimp.