Ryane Clowe and the Injury Bug

Ryane Clowe has had multiple head injuries in his career. With another injury only a few games into the season, was he a bad signing by the Devils?

Share All sharing options for: Ryane Clowe and the Injury Bug

Over the summer, the Devils had a lot of players leave for supposedly greener pastures. Therefore, Lou Lamoriello threw together a roster that has managed to not win a game this season. One of Lou's signings was Ryane Clowe....for five years....at $4.85MM per season. That is roughly 7.5% of the Devils cap space. After his poor start to the season, I just wanted to point out his specific injury history as well as a few different looks at his scoring throughout his time in the NHL.

Clowe was healthy all throughout the juniors and the AHL. Once he made the Sharks roster in 2006-07, he played well and had a clean bill of health throughout the season. Once 2007-08 rolled around, he tore a few knee ligaments and missed a majority of the regular season. Once again he was healthy until last year's shortened season. Last season, between his time with the Sharks and the Rangers, he managed to have three concussions. Obviously, the knee ligament hasn't been a problem since it happened. However, three concussions can have a lingering effect, especially if not fully treated. Sidney Crosby struggled for a few years with his concussion issue, and he has been tearing up the NHL last year and this year. On the other spectrum, Chris Pronger took on one too many concussions and is done playing hockey. I'm no doctor, but I would gather from the reports that Clowe has a headache...he has lingering negative effects from his concussions. Other than his injuries, how has Clowe performed?

Over his entire NHL career, Clowe has averaged 0.635 points per game. However, we know that he had a rookie season of 15 games and an injury prone 2012-13 season of only 40 games. So, how has his production stacked up from 2006-2012? I think that is key in seeing what Clowe is capable of without injury. Below is a chart of Clowe's productivity over those six seasons. 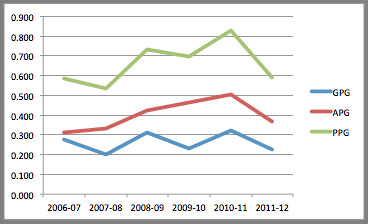 Clowe's goals per game have been consistent between 0.2 and 0.3 GPG. Therefore, it is a safe assumption that Clowe will be a 20 goal scorer if he can play the whole season. Clowe's assists per game were steadily climbing from 0.3 to 0.5 APG before 2011-12 where he dropped back down to 0.37 APG. during the 2010-11 season, the Sharks had been shuffling around their top two lines with Clowe getting a significant amount of ice time with the likes of Joe Thorton and Patrick Marleau. I believe some of this production drop has to do with the fact that the Sharks traded for Dany Heatley and Clowe stopped seeing ice time with the top line. However, his average TOI did not drop at all. (see chart below)

What does this mean for Devils fans? Honestly after looking at all this, I really don't know how Clowe will perform. If he stays healthy, I would say he hits 20 goals and maybe 40 points. If he is still struggling with headaches, the Devils should put him on LTIR and try and rehab him for later in the season or next season, they need to protect their five year investment. Ryane Clowe certinaly is a risky investment, but if he pays off, the Devils should see a good return.