How Much Does the First Month of the Season Matter?

No one can win the Stanley Cup in October. But, it can be lost. How much do the Devils realistically need to turn things around in the next two weeks to keep the season alive?

Share All sharing options for: How Much Does the First Month of the Season Matter?

The 2013-14 NHL season is two weeks old. Spoiler alert: the Devils season is not going well so far. I'm pretty sure we all know that this is the longest winless streak to start the season in team history. The Devils will play their 7th game of the young season on Thursday, and hopefully put said streak to rest in the process. Right now, the Devils sit in 26th place in the league out of 30 teams. Obviously, this is not an ideal situation, nor one that many of us fans envisioned heading into the season, judging by all of our predictions. But, just how bad of a situation is it? Clearly, there is still plenty of time left in the season for the Devils to recover and turn things around. But, a turnaround will require them to play better, among other things.

Let's assume for a minute that the Devils can get their act together enough to win a game or two over the next couple of weeks. Will this be enough to keep them in contention for the playoffs? Obviously, they won't be mathematically eliminated or anything. Still, I found myself wondering, historically, just how bad of a first month could a team have and still make the playoffs? Is there a point, a mere 30 days into the season, that a team could dig an irreparable hole? What do the Devils realistically need to accomplish over the next 15 days to stay in the mix?

I decided to look back at all of the post lockout seasons, since the scoring system was changed at that point. I went to each year's schedule, and took the 5 teams league-wide that had the least points 30 days into the season. In a couple of cases, there was an early start that involved a lone game or pair of European games, while the rest of the league sat idle for days. In those cases, went to 30 days past the first 'real' day of the schedule.

In the chart below, the set of standings over to the left are the teams' records after 30 days. On the right is the final season standings for said team, along with their position out of 30 in the league. The final column, which contains a yes/ no value, indicates whether the team made the playoffs. 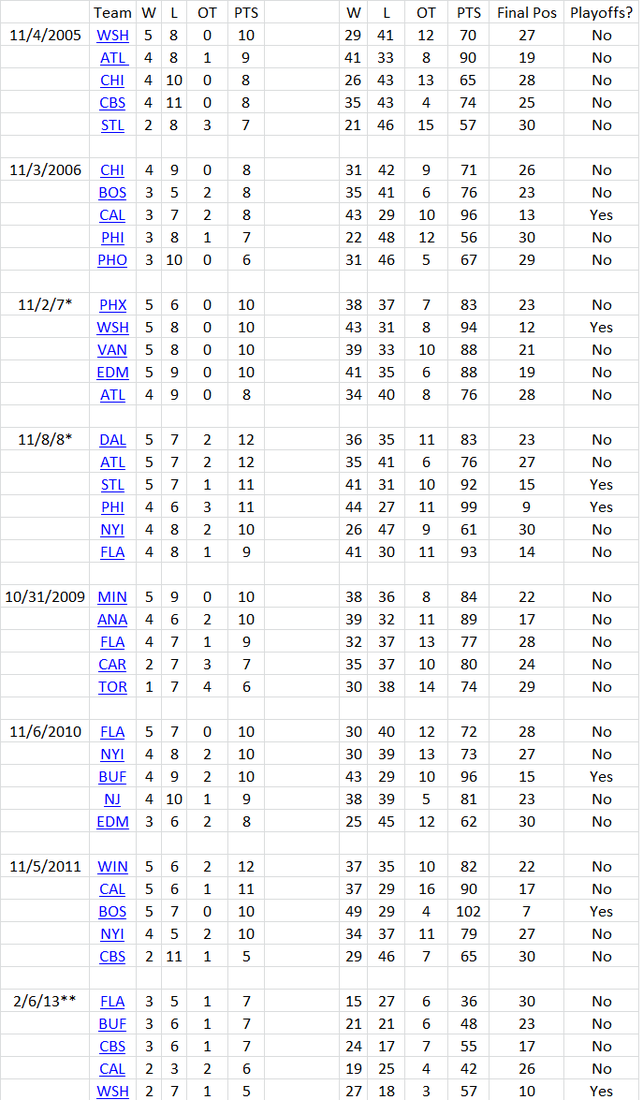 So, if you look over this historical chart, a bad first month of the season is certainly not a death sentence. There are survivors from this list. (It is worth mentioning that this study is based purely on the position of the team in the standings. I've not taken into account any changes / improvements that any of these teams may have undergone to improve their results and ultimately reach the playoffs). All in all, there are 41 teams in the chart (for 2008-2009 I included 6 teams, since there was an exact tie for 5th worst record). Out of these 41 teams, 7 of them actually ended up making the playoffs (17.07%). That's a bit higher than I was expecting to see, and seemed encouraging upon first glance. Another encouraging statistic for the bottom dwellers -- in 6 / 8 years in question, at least one bottom-5 team made the playoffs.

When you think overall about how many teams make the playoffs in total, these numbers are a bit less encouraging. So, there are 8 seasons in the study. 16 teams make the playoffs each year, or 128 total over this time period. This means only 5.47% of the playoff teams in the post-lockout era were in the bottom-5 of the NHL standings 30 days into the season. Keeping this in mind, let me first say it would be great for the Devils to somehow not be one of the worst 5 teams in the league at the 30 day mark. Sure, it would require a turnaround of sorts, but, looking at the standings, this is still possible. We'll call that goal #1. Regardless, getting a couple of wins under their belt could still keep them alive, but somehow accumulating 10 points or more would make the Devils chances a bit better.

For one, let me just first address the "doomsday scenario". No team in the post lockout era has ever gone winless 30 days into the season. Toronto had 1 win in 2009-2010, the lowest total of this era. I believe 5 other teams had only 2 wins to their credit after 30 days. Toronto, as you may have expected, finished in 29th place that year. Interestingly enough, out of the 5 teams with only 2 wins, one of them (Washington) remarkably made the playoffs just last year in the lockout shortened season. The other 4 teams with just 2 wins at the 30 day mark all finished between 24th and 30th overall. So, In the efforts to avoid being pretty much historically bad league wide and not just team-wise, the Devils, at a bare minimum, need to win one game over the next two weeks. If they win two games, that's still a pretty bad start. Out of 240 teams that have played post-lockout, only 6 have had 2 wins or less after 30 days (2.5%). Keeping this in mind, 3 wins would be really nice.

Let's aim a little higher. What do the Devils need to do over the next several weeks to give themselves a fighting chance? I mentioned before that 10 points would be a nice barrier to crack. This is because although 7 of the 41 teams in the study made the playoffs, only 2 of these playoff teams (Calgary 06-07, Washington 12-13) had less than 10 points accumulated after 30 days. In total, 22/41 teams had less than 10 points, yet only 2 made the playoffs (9.09%). On the flip side, just under half the teams in the study (19/41) had 10 points or greater at the 30 day mark. Out of these 19 teams, 5 made the playoffs (26.32%)! So, if the Devils can manage to get 10 points to their name by the 30 day mark, it looks like the odds of a turnaround are much higher.

Looking at the upcoming schedule, the Devils have 6 games between now and the 30 day mark. If they can put together some combination of 7 points or better over these 6 games, this will get them to ten points. Even among the teams at the very, very bottom of the NHL standings, over 25% of them still make the playoffs if they have at least 10 points at the 30-day mark. Looking at the Devils' schedule (and having watched all the previous games), it won't be easy. If the Devils don't make the 10 point mark, the odds are stacked much greater against them.

I'm just going to post a small chart recapping some of the numbers in question:

It will be interesting to see how things play out this season because of the conference re-alignment. This is one big factor the Devils may have working in their favor. Out of the bottom 8 teams in the league standings right now, 6 of them are from the Metropolitan Division. Sometimes (at least in this new format), maybe you only have to be as good, or just a hair better, than your immediate competition. Taking that into account, along with the historical data from the post lockout era, there is still time for this team to get it together and straighten things out. 3 wins over the next 6 games should be sufficient to start the turn-around. Anything less and the Devils are keeping some questionable company. Whether or not the play on the ice improves to a level that makes 3 wins, or even 1 win, a possibility remains to be seen.