The New Jersey Devils are now winless in five as they lost 3-2 to the Calgary Flames on a late third period goal against. This recap goes into how two-thirds of the defense didn't measure up and how the offense didn't get much going among other observations.

So far in this five-game road trip through Canada, the New Jersey Devils have had three very different games. They looked great for two periods and then botched it entirely in the third period on their way to a 5-4 shootout loss.  They stole a point in Vancouver against a superior Canucks team and lost in overtime for a 3-2 final.  Tonight, the New Jersey Devils hung with the Calgary Flames for two periods and tried to hold on to a 2-2 score only for it to end 3-2 in regulation.  The Devils are now 0-2-3.  They are winless in their first five games of the season.  The fans are unhappy. I imagine the players, coaches, and management are just as disappointed.  As such, someone wants someone to blame.

Accountability is a fun code word for "I want someone blamed and fired/replaced." That's not what that means.  It really means having someone admit their error and make improvements to reduce or prevent them.  Unfortunately, there is plenty to point out where one could throw out the A-word.  The Devils took four penalties while only drawing one; their second power play was the result of a delay of game, not a drawable call.  The penalty kill looked good to start but looked foolish on their second power play goal allowed.  The team took only 21 shots on net out of 49 attempts.  They got a mere four shots in the third period. Even shifts where the Devils appeared to have pressure, they didn't get any shots on net.  The Flames were more effective and put up 29 shots on 55 attempts.  Martin Brodeur had a far better game than he did in Edmonton but the goal he conceded to Mark Giordano appeared to be stoppable.  And then there's the defense.

Oh, the defense.  Peter DeBoer put in the young one, Adam Larsson, and perhaps he was the best?  He didn't get torched on an error and he was positive in possession (Corsi, not Fenwick, and that's a thing given how the offense went for New Jersey).  Andy Greene was similarly effective.  I suppose those are the positives?  But the other four.  Oh, Bryce Salvador admitted to the press that he and Marek Zidlicky got confused on the game deciding goal.  Great, I'll blame both for leaving Sean Monahan wide open in front of the net in the dying minutes of the third period.  Salvador managed to fire plenty of rubber, only none of his six attempts went on net - five were blocked.  Supposed offensive defenseman Zidlicky was all over the place with the puck and managed to defer to #28 when it came to shooting it. He only had one attempt.  Swell.  In terms of possession, Peter Harrold and Anton Volchenkov got wrecked. Volchenkov also took two penalties, both avoidable penalties, and the second one led to Dennis Wideman getting on the board.   The duo played less than 13 minutes at evens and they contributed very little.

Fans are unhappy with these four and I don't blame them. Not one bit.   The harsh reality is that Mark Fayne is only one man so only one of these would remain in the lineup should there be a change for the Winnipeg game.   Fans are clamoring for youth that doesn't exist as an actual option.  Eric Gelinas' area of improvement has to be on the defensive side of the puck, Jon Merrill should prove he's an AHL player before throwing him into the NHL, and everyone else is far away.

It's not youth, it's execution.  It's not taking down Jiri Hudler without the puck in front of the ref.  It's not getting confused on who to cover down low.  It's not blowing zone exits, be it clearances, passes, or chips.  It's not winding up for shots to allow defending players to go for blocks, especially when wristers would be more appropriate.  It's not

The Game Highlights: From NHL.com, here are the game's highlights in video form:

AIM: I will repeat myself but it's worth mentioning again.  The Devils took 49 shooting attempts and only 21 got on net.  17 were blocked and 11 missed the net.  Only four got on net in the third. Blocks and misses will happen but against a team that has been somewhat leaky with respect to goals allowed, the pucks really needed to get on net more often.  The Devils have enjoyed a few breaks from the second game onward.  The willingness and space is there; but the timing and accuracy have not been.  As I thought to myself often during this game (cleaned up for this post), "Aim, Devils, aim."

For One Night - Zone Exits at the Ready: User DevilsRKS has asked me if he can publish zone exit data that he's tracking in odd number games on the site.  He's done so in the FanPosts and you should be reading those. Here's an example from the first game. Also, his charts for passes too. Because tonight was a road game at a reasonable starting time on a Friday night, he provided updated charts in the Gamethread.  Here are his totals from tonight's game: 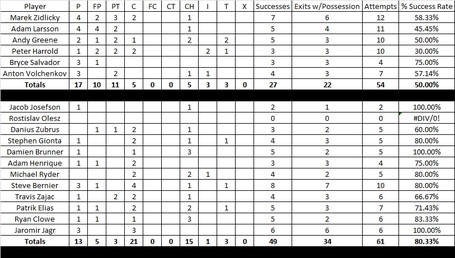 Simply put: the defense all struggled to get the puck out of their own end.  Even Larsson and Greene did not impress.  Salvador had the highest success rate, but he only made four attempts.  It's interesting that Zidlicky and Harrold had more attempts than their partners.  One would think that those two would be better at moving the puck than them. Yet, tonight, they weren't so good.  Harrold was poor. Zidlicky at least succeeded on half of his attempts but when he didn't - it was noticeable.  Especially on the game deciding goal, where he committed a turnover even before the killer pass came to Monahan.

The forwards were much better as a group.  The "worst" of the bunch was Dainius Zubrus but he only had the five attempts.  Travis Zajac wasn't so good either.  Jaromir Jagr and Damien Brunner were perfect, which is a bit astounding in that it meant they were in the defensive zone tonight at times.

Season Debut of Josefson: Jacob Josefson came into the lineup in place of an injured Ryan Carter.  He was OK. He didn't play too much.  Just less than seven minutes with the fourths and a little PK time.  The run of play didn't destroy him (he actually came ahead in possession), he won a few faceoffs, and didn't cause of much an issue.

Please Reunite 14-19-17: Adam Henrique and Travis Zajac were split up.  Henrique centered Ryane Clowe and Ryder while Zajac was in between Rostislav Olesz and Damien Brunner.  The unit of Henrique, Zajac, and Ryder did well in possession in the past few games.  Apart, they did poorly tonight.  All three finished below 50% in terms of Corsi and Fenwick percentages.  Henrique did get a goal, a rebound right after a power play ended, but his two shots on net came only in the first period.  Brunner did get three shots on net out six attempts; but he didn't flash nearly as much.  Zajac didn't look so good with the puck at times.  Clowe and Olesz were invisible for the most part.  I know it's early and it's a long season and getting some different looks isn't a bad idea in general.  But I think DeBoer should go back to what's worked for Henrique, Zajac, and Ryder, because tonight, it didn't really work as well as would have hoped.

So Who Did Look Good Up Front? While the Corsi percentages are skewed due to all of the blocks (17 total against NJ), they matched up with the group I saw was the best on the ice: Elias, Jagr, and Zubrus.  They generated a goal - a long rocket from Big Z - and they provided the little pressure the Devils had in the third period.   That threesome got their forecheck going and if it wasn't for a few miscues here and there, they could have done a lot more damage.  It's not a fast line and Jagr's defense remains a question mark at best; but these three vets have provided some silver linings over the last three losses.

Not Wide-A-Min: Steve Cangelosi's pronunciation of Dennis Wideman was grating.  That was helped out by the fact that Calgary really leaned on Wideman tonight.  As they should because he was fantastic.  He played over 29 minutes, took 13 total attempts (!!), put four shots on net, and scored off the iron to put Calgary on the board in the second.  The Flames' power play loves to use their pointmen and with him and Giordano, it's easy to see why after tonight's game.  Possession went well for him and he did it without selling out for so many blocks.  The Flames' offense, power play and otherwise, often went through #6 and it was a success.

Brodeur Was Actually Good: The goal allowed to Giordano was weak.  He didn't see Wideman's shot and Monahan's was right on his flank.  The other 26 saves he made were not. He robbed Jiri Hudler - also a Flame with a good game - twice right in front of the net.  He moved pretty well, though he got spun on a play by Joe Colbourne that could've ended in disaster but did not.  He moved the puck around as one would expect from Brodeur and he didn't crack under pressure when the Flames scrambled for the puck.  Especially in the beginning of the third when the Flames took a quick 6-1 shot advantage.   I liked his performance tonight.  I just wished the skaters in front of him did better.

While I'm on the subject of goalies, I will say that I felt MacDonald had a good game. He probably wished he had the Zubrus goal back but he didn't let his team down.  For the Flames this season, that's all they may ask of him.

Sean Monahan, Calgary Scoring Leader: One shot, one goal.  He didn't do much tonight but he proved that leaving a man wide open in front of the net is a terrible idea.  Again, I fault Zidlicky and Salvador.