Comments on the Devils' Goaltending Duo

The Devils have an interesting goaltending situation with a future hall of famer and a young, starting goaltender.

Share All sharing options for: Comments on the Devils' Goaltending Duo

The New Jersey Devils traded their 2013 first round draft pick for Cory Schneider. The main reason that decision was made by the team's management was because they believed that Cory Schneider would be Brodeur's successor. The only questions that fan's were left with was....when will Schneider take that throne from Marty?

The start to the Devils season has been less than spectacular. Through four games they have yet to win, although they've picked up three points through OT and SO losses. Why have the Devils started 0-4? Many pundits have hypothesized that the Devils would lack scoring this season. The Devils have scored 9 goals over 4 games or 2.25 goals per game. That's pretty average so far this season. The Devils goaltending on the other hand has been below average. Brodeur and Schneider have both played two games and their stats have been subpar.

Bother Goalies have an atrocious SV% and their GAA is hovering around an average of 3.0. Now, I know it has only been two games, but the fact that both goalies have allowed 6 or 7 goals on 52 shots is worrisome. Perhaps the time has come to let Schneider play most starts.

If Schneider had played three of these games, would it have been possible that he would be more in tune to his game? Perhaps leading to one of these losses being a win?

For those of you that think Brodeur should still get the chance to split a significant number of starts given ihs past accomplishments, let's look at the last three years for Schneider and Brodeur. Below is a beautifully generated Excel chart with both goalies GAA over the last three seasons. 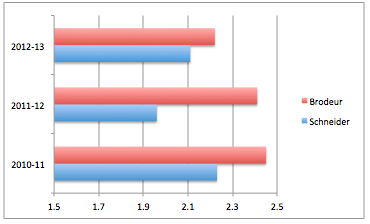 As you can see, Schneider has been significantly better at stopping a majority of shots against than Marty over the last three years. In this timeframe, Brodeur started 144 games while Schneider only started 88. So perhaps Marty was a litle fatigued for some of these games and thus led to a few soft goals. In that case, let's look at SV% over the same time. 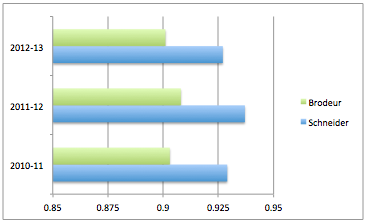 Again, Schneider has a significantly better save percentage than Brodeur. Interestingly enough, they both played the same number of games in 2012-13 and Schneider was almost 0.25% more efficient at stopping pucks. That's not much, about 3-5 less goals in a season.

So, I would suggest that DeBoer let's Schneider play a few games, and if he gets into a rhythm, keep him playing except for back to backs that encompass a lot of travel. Tonight is the Devils' fifth game, and they really need to choose a goalie who will start a majority of the games this season. That goalie should be Cory Schneider.