Breaking Down Stephen Gionta's Goal Against The Capitals

Stephen Gionta's goal on Friday featured some very good play between the mighty mite and Jacob Josefson. I intend on looking back at the excellent play between those two and the goal against the Capitals.

Share All sharing options for: Breaking Down Stephen Gionta's Goal Against The Capitals

The Video Of the Goal

All images from this post are courtesy of the video above, which comes courtesy of NHL.com. All the numbers and lines come courtesy of yours truly and his awesome MS paint skillz.

The Players on the Ice

* Ilya Kovalchuk was on the ice for the goal because the penalty expired, he had no part of the goal whatsoever

The play from before features the Caps getting a shot on goal, with Marty giving up a rebound.

The Highlight video has some extra footage of the goal (in slo-mo nonetheless!), so I'll be using that as well as the original video of the play developing 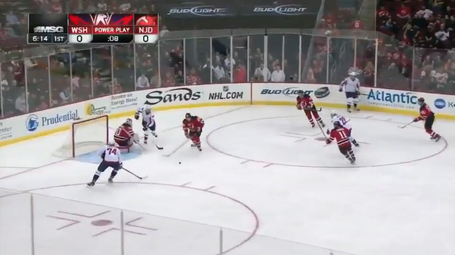 Here you can see that Mark Fayne is in the perfect position to clear the rebound that Marty gave up. He's about to get to the puck and get it out. On the other hand, if John Carlson was able to get to the puck, he might be able to get a good chance there or chip it past Marty. However, that's not the case. 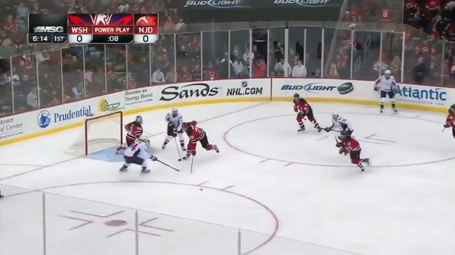 Fayne does get to the puck and pokes it away. The puck will head towards the neutral zone, with two caps being able to do nothing- those two are Marcus Johansson and Wojtek Wolski. John Carlson (who is also trying to gain control of the puck) should be able to catch one of the Devils forwards if he's able to get on a break. 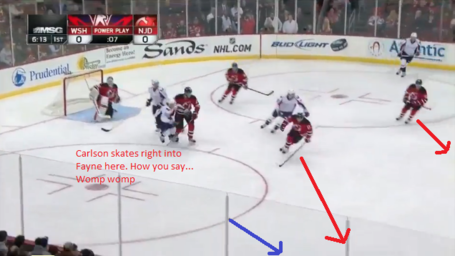 As you can see in this frame, Carlson skates into Fayne. This isn't interference because it's not intentional- Carlson went after the puck and skated into Fayne, who also went after the puck. This is actually kind of huge here, especially after you see the play develop. As for the forwards (Josefson and Gionta), they have the right idea here- gain control of the puck and clear it. 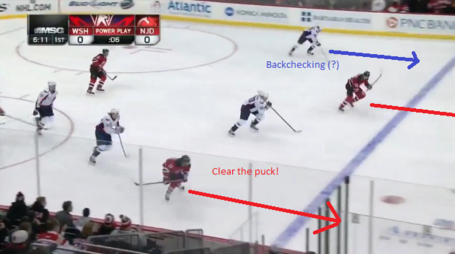 While Gionta has yet to fully control the puck here, he has the right idea here. Jacob Josefson does a good job here of using his speed to get past Troy Brouwer. Tomas Kundratek, the 5th caps skater out for the power play isn`t visible here but he`s currently getting back to defend the rush. Gionta's able to get to the puck, which leads to this 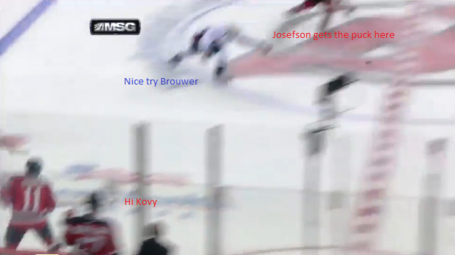 This was really the best shot of Gionta passing to Josefson that I could get. The video of the goal as it happened had a close up of Gionta and didn`t pay a lot of attention to the streaking Josefson, while this shot shows more clearly that Jacob Josefson is skating ahead through center ice. 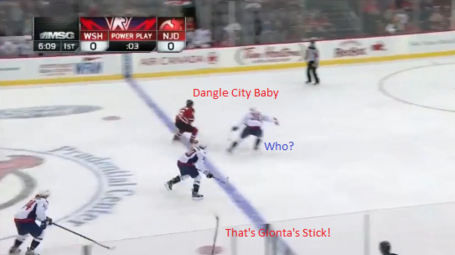 Josefson got the puck from Gionta and you can see that he's currently dealing with two Caps- Troy Brouwer is currently lining him up for a hit, which probably isn't the best idea (see the raised stick off at the bottom of the frame), while Kundratek should be able to take Josefson on. 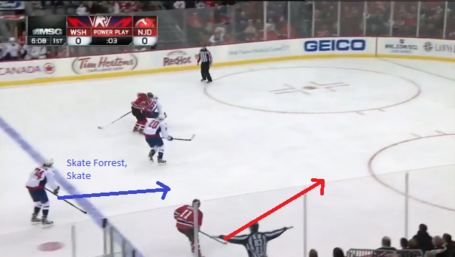 Brouwer is fully committed to going after Josefson, who's dangling around Kundratek (again, who?). Carlson is the guy who has to get to Gionta here because Brower is going after Josefson instead of trying to stop Gionta. I'd like to remind you that earlier Carlson did skate into Fayne- while he did recover, it did affect him as he wasn't able to catch Gionta, who's skating with a full head of steam right now. 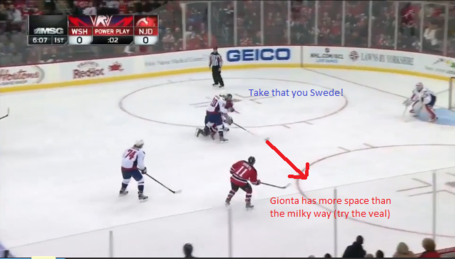 Josefson takes the pain to make the play. Gionta's wide open and a good step or two ahead of John Carlson, who has to get back. Brower's decision looks even worse considering that Gionta has an excellent chance. 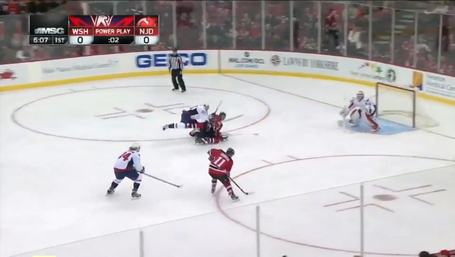 It's Gionta vs Neuvirth now. Carlson's tried his best to get back and help his goalie, but right now Neuvirth is the only guy who has a chance of stopping Gionta. Brouwer, Josefson and Kundratek are all down and can only watch. 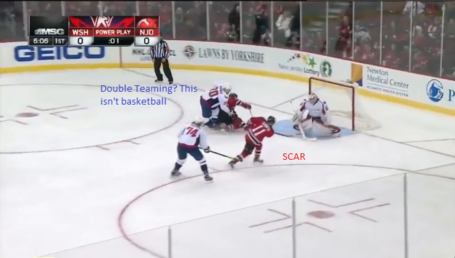 The Devils executed perfectly here. While Fayne didn't clear the puck to create a scoring chance, Stephen Gionta was the one who made this play happen. He got the puck and saw Josefson skating towards the net with speed and made a very good pass. Josefson got the puck, got around Kundratek and got the puck to a wide open Gionta, who went 5 hole.

Needless to say, the Devils did get some help from Troy Brouwer. I'm not sure if there was some miscommunication there- the entire time it looked like Carlson could've made the play to catch Gionta, however I think he thought that Brouwer was heading to the net to catch Gionta. Brouwer is really the guy who screwed up royally- instead of going for Josefson, he should've done something about Stephen Gionta. In the long run, what's better- hitting a guy or covering the small guy who's wide open? Brouwer's poor decision helped out alot with this goal, but the Devils do deserve some credit for the nice play they made.