The New Jersey Devils Raised Most Ticket Prices for 2013 Season

Share All sharing options for: The New Jersey Devils Raised Most Ticket Prices for 2013 Season

The New Jersey Devils will begin selling tickets for individual games to the general public at 7 PM EST tomorrow. Season ticket holders have received an email from the team informing them of a special presale to buy additional tickets from 10 AM this morning to midnight on January 21 at half of the single game price. User Alamoth thankfully shared that information this morning in this FanPost. In that very same email from the Devils, there was an attached file containing the ticket prices for the 2013 season for all three tiers: Premium, Classic, and Devils Army Special. This information is now available at the Devils website, so you can see for yourself. As I've done prior to the 2011-12 season, I decided to compare this season's prices for single and season tickets.

Unfortunately, I've got some bad news. The Devils raised most of the ticket prices for this season compared to last season. Really.

Here's how the single game ticket prices compare between the 2011-12 and 2013 seasons. I should note that for some inexplicable reason, the Devils decided to define two new sections, both in the end where the Devils defend. The Gray section are the lower level ends, while the Pink section consists of rows 4-7 in the upper level. Again, all information comes from the Devils' official website. 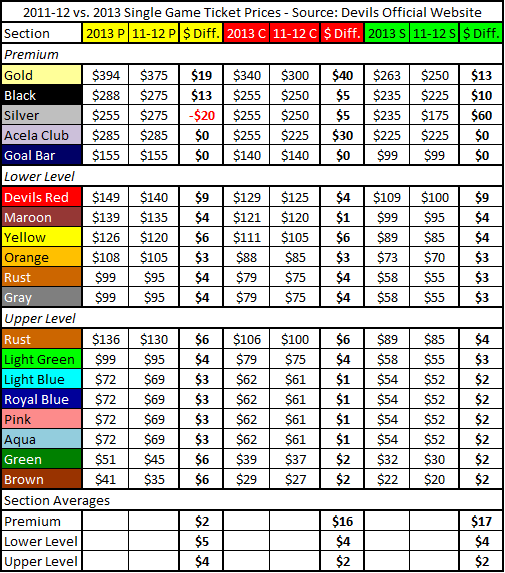 The numbers in black is the amount increased from 2011-12 to 2013. The only section to not see an increase in single game ticket prices is the Silver section and that's only for Premier tiered games. The Acela Club seats for Premier and Special tiered games have remained steady, as have all Goal Bar tickets. Everyone else will pay at least $1 more than they did last season for single game tickets.

Here's how season ticket prices per game compare between 2011-12 and 2013. The 2013 prices come from the attachment sent to all season ticket holders regarding the exclusive pre-sale. As with the single game prices, I compared them with 2011-12's season ticket per game prices as noted in this post. 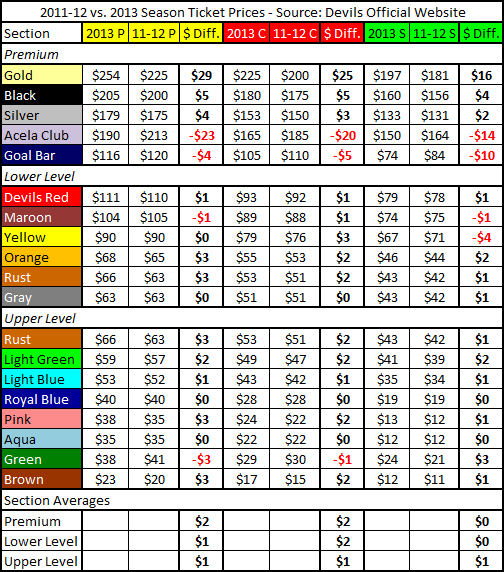 There are a few more sections that actually see some price per game reductions compared to last season. The Acela Club and goal Bar seats see a reduction across the board; the Green sections will see a little savings for Premier and Classic games; the Maroon sections have a small reduction for Premier and Special games; and the Yellow section gets a little cut compared to last season for Special games. Mostly everyone else will either hold steady from last season or an increase in price per game. Incidentally, the new Gray and Pink sections see their value here. The Gray season ticket price was the old lower level Rust price, which costs a little more per game. The Pink section charges a few more dollars per game than the Aqua section it was a part of last season.

Now, before you start getting mad, I want to point out a couple of things. First, the increases aren't that much. The only section that has seen significant increase over last season is the Gold section, a.k.a. the most expensive non-suite section in the arena. Almost all of the other increases are less than $9, and the Devils Red sections are the only ones that are above $6. Second, the single game ticket prices have increased more than the season ticket per game prices. Third, these increases really only affect single game and new season ticket plan buyers. I don't believe current season ticket holders are affected by these changes. Fourth, current season ticket holders can currently buy tickets for games for half of the single game price. If you're like me and you want to get extra tickets, the Devils are at least doing you a huge solid right now for big savings. Fifth, I can understand a slight increase across the board in the sense that the team is coming off a big playoff run that generated a lot of attention in the team. While I can't say it's wonderful, this is a business and it's important to strike while the proverbial iron is hot.

That all said, you should be mad. Or at least annoyed, irritated, irked, peeved, miffed, and/or frustrated. It's one thing to raise the prices a couple of bucks after a successful season. But right after a lockout that killed half of a normal-length season and shut everything down for several months? Who thought this was a good idea? Whatever momentum they had in terms of interest was metaphorically shot dead months ago. The team didn't bring in anyone new to make this team seem more like a contender last summer. They didn't just spend a lot of money to make the team or arena more worthwhile to see. The sheer optics of raising prices after being part of an effort to have the league go dark for months are simply terrible. I'm sure there are legitimate reasons behind the changes, but I'm not really all that interested in hearing them given that my fellow fans and potential fans are being nickeled-and-dimed compared to last season. I don't really care about complaints about closed practices and training camp; the team raised ticket prices after a lockout. Again, who among the Devils organization honestly thought raising prices nearly across the board was a good idea?

Moreover, when you take a closer look at the tiered pricing, things get more expensive. Whereas last season had a balance in the three tiers, it's imbalanced for 2013. There are nine Premier games, eight Classic games, and seven Special games. There is only one Classic game per month until April, where there are five. There are no Special games in April, it's just Classic or Premier games. I understand that the 24-home game schedule would result in some imbalance. I fully understand that all three home games against Philadelphia as well as the two home games against the Rangers and Penguins should be given the highest tier. I can buy into that Montreal home game on Saturday, March 16 will be a big day given the weekend and an opponent with a traveling fanbase. I don't quite get making an afternoon game against Florida on April 20 a Premier level game. Still, because there are more Premier games than any other type, the increases will impact that much more since those are the most expensive games. There are no cheap, non-secondary market solutions unless you know a season ticket holder who's involved in this exclusive pre-sale that ends next Monday and willing to buy tickets.

Don't get me wrong, I'm glad that the Devils will be back. I'm glad that my own season tickets haven't changed as far as I can tell. But I feel bad for the new buyers and those who just go to a couple of games. You may not pay that much more, but I don't think you or any other fan should after the Incredibly Stupid Lockout of 2012. I really hope that I got something wrong in comparing these prices. Maybe it will reveal that it's not so bad, that not so many people have had their prices raised. Maybe I'm the only one who thinks this is a big deal. I've checked the numbers several times, sort of hoping they would change because I still don't want to grasp that the Devils actually raised prices compared to 2011-12. But as it stands, they went up for this season. Let me know what you think about that in the comments. Thank you for reading.