Recapping the last week in Albany Devils action, which included three games at Manchester, at home vs Worcester, and vs Bridgeport in Atlantic City.

Welcome to the 15th week of your Albany Devils Roundup. It was a big week for Albany, as they bid farewell to all of their NHL bound players, as did all of the AHL clubs. The impact of these losses will be different on each team, but one has to think Albany, with their lack of depth up front, will struggle to make ends meet at times. They managed to put up four goals in their first "new look" game on Sunday, so even though they lost, this was a positive sign. In fact, Albany scored 4 goals in all of their games this weekend. They played all 3 without Jacob Josefson or Stephen Gionta, who were both held out with (hopefully) minor injuries. So, the fact that their center depth was tested all weekend and they responded with 4 goals each time out sounds promising. They did struggle at times in the defensive end of the ice. It will be a work in progress over the next few weeks for Albany, and much of the AHL.

After a 1-2 weekend, right now, Albany sits 11th in the conference with 35 points (14-13-1-6). They still hold several games in hand on the few teams in front of them in the standings. They did, however, lose the chance to gain ground on two, in losing to both Manchester (9th) and Bridgeport (8th) over the weekend.

Bryan Haczyk, Kelly Zajac, and Alexandre Carrier all played for Trenton in a 3-1 loss Friday night. None of them appeared on the scoresheet.

Saturday, Haczyk and Carrier played in a 3-1 loss, and Haczyk scored the lone goal.

Scott Wedgewood also played this game, he gave up 3 goals on 19 shots in a losing effort.

Maxime Clermont played Saturday for Elmira. He gave up 4 goals on 39 shots in a 4-3 overtime loss.

Most of the Albany guys are healthy, with the exception of Scott Parse. Parse remains out with a lower body injury.

Not a good showing by Albany in this game. I didn't get the opportunity to watch much of it- when I tuned in Albany was down 3-1, and it quickly became 4-1 after that. I noticed the Albany PK allowed 2 goals on 3 opportunities. Not a good weekend for the PK, which only converted 8/13 times, for a 61.5% success rate. The Albany Power play, however, was very good on the weekend, converting 6/17 times for a 35.3 % success. So, again it was the special teams that let down the Devils, just not the part of the special teams you would have thought.

Albany goals were scored by Zalewski, Larsson, Tedenby, and Pesonen.

Jay Leach was, astonishingly, on the ice for every Manchester goal (4 ES, 2 PP), except for the empty netter at the end of the game.

Joe Whitney had an also astonishing 9 shots in this game. He was unable to score, but he did have an assist.

Saturday evening, Albany put in a very strong showing in what was the last game and home game for many of the NJ bound players. And while it was Worcester who would open the scoring, it was Albany who would do all the rest of it, coasting to a 4-1 victory. This was a more or less complete domination by Albany. Despite winning going away, Albany still outshot Worcester 28-17.

After Hamilton made it 1-0 for Worcester, Steve Zalewski tied up the score just before the end of the first. Early in the second, Mattias Tedenby would score for the fourth straight game, making it 2-1. It was a power play goal. Next, it would be Eric Gelinas' turn. Gelinas would snipe a shot to make it 3-1 Albany just before the end of the second. Darcy Zajac would finish off the scoring almost half way into the third, as 4-1 would be the final tally in this contest.

Top to bottom, this was a great team effort by Albany. They only allowed 17 shots on goal for the whole game. They controlled the play and the flow of the game. They also got contributions from all over their roster, not just NJ bound players. Eric Gelinas scored another goal, his third of the yaer, in just his 17th game now, and second in the last week. He is hopefully getting his game rolling now. Gelinas is finally able to play without the full cage again, as of this weekend.

Sunday afternoon, the new look Albany Devils made their season debut in an afternoon contest vs the Bridgeport Sound Tigers. It was a tough go for Albany early on. The Bridgeport forecheck pinned them back pretty relentlessly at times. Both the forwards and defenseman were having trouble exiting the defensive zones at times. The SoundTigers were rewarded for their good play early when Aaron Ness made it a 1-0 game just over halfway through the first. It was, like 5 of the 9 goals in this game, a power play goal. So, the power plays were very good in this game. Or, the penalty kills were very bad. However you want to look at it.

Even strength play evened out for the Devils, fortunately, as the game went on. Albany scored two even strength goals in the game, but they would get the equalizer on the power play, just as the first period was coming to a close. Phil DeSimone blasted home a one-timer from the high slot, and it was a 1-1 game at intermission. The Devils were probably fortunate to be at 1-1 at this point. Not surprisingly, Bridgeport outplayed them during the first period. Virtually every line combination up front was entirely new for Albany. For the defense, the change was not quite so drastic. Brandon Burlon stepped in for Adam Larsson, and that was the only change from the previous two nights.

The second period played out similarly to the first. Bridgeport took an early lead on a series of mistakes by the Devils that led to an easy Nino Niederreiter goal. The camera angles from Atlantic City were pretty weird at times, but it looked like Gelinas stepped up to challenge someone near the blue line and got beat. Then, Kinkaid went for a poke check, and missed. I think you can figure out what happens from there. Fortunately, Kelly Zajac's first AHL goal evened the score at 2-2, which is how the second period would conclude.

In the third period, Albany fell behind early. Bridgeport got a tally from Blair Riley just about 2 minutes into the final period. Then, Nino Niederreiter extended the lead to 4-2 with Albany again failing on the penalty kill. Special teams were again a problem for Albany today, but this time it was the penalty kill that let them down, not the power play. Bridgeport was 3/5 on the power play in this game.

Albany themselves were no slouches at 2/6 with the man advantage. One of their two goals came on the 5-on-3, and it got them back in the game. Joe Whitney scored on a one timer from Matt Anderson and Eric Gelinas. At this point, there were just under five minutes left in the game. Then, as the clock ticked down towards 3 minutes remaining, Chris McKelvie would get the equalizer, assisted by the Zajacs. Kind of cool.

What was not cool, was when just seconds later, Matt Anderson would take a pretty reckless and untimely penalty when he crashed into the Bridgeport keeper Poulin. The SoundTigers would win the game on the ensuing power play, converting for the third time, to make it a 5-4 score. Those numbers would stand, and Albany would leave Atlantic City, again 5-4 losers.

Clearly, it was a big day for the Albany guys. They watched many of their teammates head to NJ for camp last night. They also headed to New Jersey, for their game against Bridgeport. This game would certainly stretch their depth, since a couple of the guys at camp will inevitably be returned to Albany, making things a little easier. All in all, they did not fare that badly.

With no practice time, Kelly Zajac and Haczyk still chipped in offensively right away. I'd like to see more of the youngest Zajac over the next few games. He seemed to fare pretty well in his matchups in this one, and showed a little skill on his goal.

Chris McKelvie keeps producing skill plays and getting on the scoresheet. After a big weekend last week, he was held scoreless on Friday and Saturday. Sunday, he chipped in the tying goal late in the third.

Phil DeSimone finally got back in the lineup, and scored a goal on a great one-timer.

David Wohlberg still hasn't broken through like the Devils need, but he seems to be getting closer. Hopefully he can turn the corner soon, the Devils need him to produce points.

These contributions from guys just inserted into the lineup give me some hope for the Devils moving forward in the new AHL.

All stats taken from theahl.com and echl.com 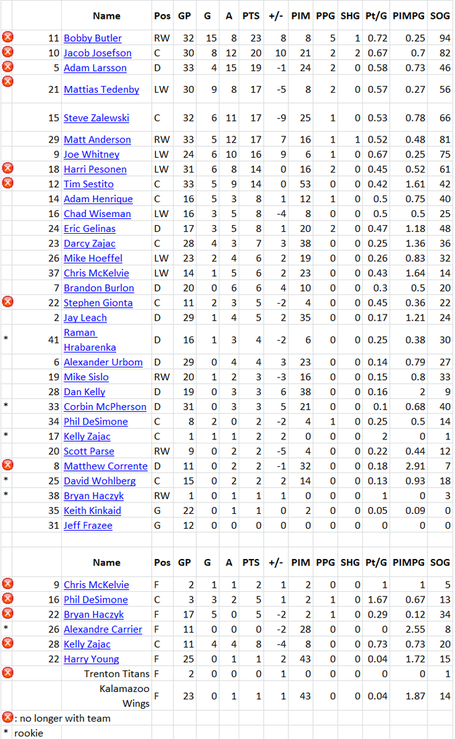 Next weekend brings another 3-in-3 to the Albany Devils. This week of practice will be very important to the team, as they look to solidify some new line combinations up front. All three games are winnable for Albany next weekend. They have two against Adirondack, and one at Springfield, a team they have played very well against thus far. Previous records may not be a good indicator of things moving forward, however. We shall see.

Definitely Check out Tracey's great photos, recaps, and thoughts on all things Albany Devils, over at Thoughts Inside the Box.

Bill Cain has a great Albany Devils blogg too, and also tweets from some home games.

So, how do you feel about this Albany team right now? Will they struggle to compete or score goals? Will their forwards be competitive in the coming weeks? Who will step up in the next few weeks and seize the available opportunity to claim a big role? Will the defense survive the loss of Larsson? Please leave your answers, thoughts, comments, and all things Albany Devils in the comments section below, and, as always, thanks for reading.