Bryce Salvador - Saving Goals One Puck at a Time

Share All sharing options for: Bryce Salvador - Saving Goals One Puck at a Time

When you think of who stops the puck for the Devils, the names that come to mind are most likely Martin Brodeur and Johan Hedberg - and you wouldn't be wrong. I would like to add one more name to that list, though - Bryce Salvador. In the 2011-2012 Salvador made up for many players mistakes, checked countless opponents into the boards, and stopped puck after puck with his stick, glove, foot - you name it. There are a few occasions in which Salvador even stopped the puck from crossing the goal line in a last second effort. They were highlight worthy saves that not even the best goalie in the league could have stopped (which is actually true, seeing as the Devils have arguably the best goalie in the league). After the jump I'm going to analyze three of the incredible goal line saves Salvador made during the 2012 season - bringing the shutdown defenseman back to his roots after his impressive point production during the 2012 playoffs (4-10-14).

Throughout the 2011-2012 Salvador only gained 9 points - all assists, but he was a + 18 on the season because he did his job. He consistently stopped the puck before the other team could execute, and one more than one occasion he was the last line of defense. Let's take a look at three times this past season where Salvador bailed the entire team out, including the goalie.

The first occasion of Salvador's goalie ability was on November 25, 2011 against the Islanders. With less than a minute left in the game, the Isles were desperate to tie the game at 1-1. They were giving it everything they had with an empty net on the other end of the ice when they almost got one. Tavares took a wide angle shot with Okposo prepared to deflect the puck into the net after it whistled by Brodeur, but Salvador got his stick in the way. 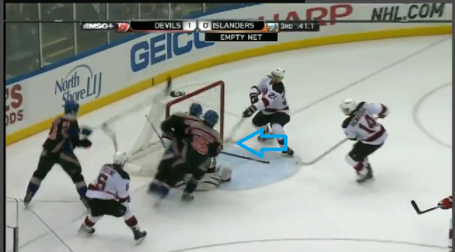 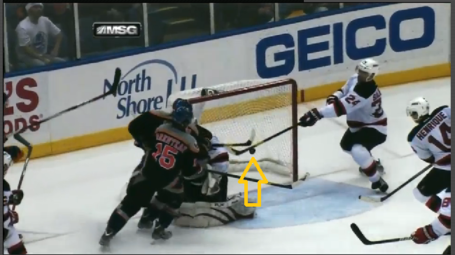 Check out the full video of the play here.

The Devils survived the mayhem for another 30 seconds after this incident to win the game 1-0.

December 16, 2011 was a huge night for the Devils organization. It was the night that Scott Niedermayer had his jersey number retired by the team and the Devils went on to beat the Dallas Stars with a commanding 6-3 victory. Just five minutes into the second period, the Stars were on a powerplay with the game tied at 2-2. Looking for a way to take the lead, Jamie Benn brought the puck into the zone, played it across to Louis Eriksson and he went for the goal. It looked like a guaranteed goal, until Salvador sacrificed his body to save the Devils from falling behind in the game. 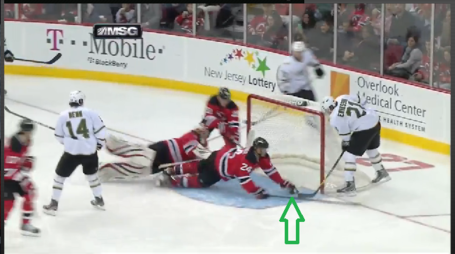 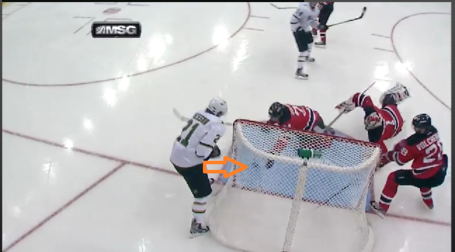 A full video version of the play can be found here.

With an amazing spinning glove save, Bryce swatted the puck away from the goal line never closing his hand around the puck - keeping the play from going to a penalty shot. This play came just two minutes after a game-tying short-handed goal from Adam Henrique and kept the momentum in the Devils favor.

On March 6, 2012 the Devils were facing the New York Rangers in the middle of an Atlantic Division medley of games. The Devils were leading 3-1 with just over eleven minutes to go in the third period while the Rangers were on the powerplay. In a play similar to the Islanders example above, Del Zotto passed the puck across Brodeur's crease leaving the puck loose to tap in the net. Somehow, Salvador got his skate on the puck and kicked it to the crossbar giving Brodeur time to cover the puck before it came across any more danger. 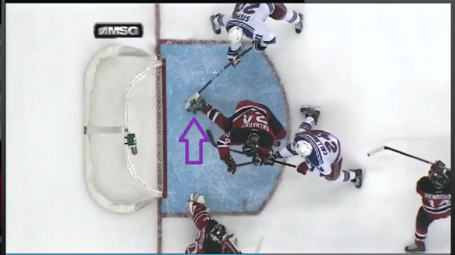 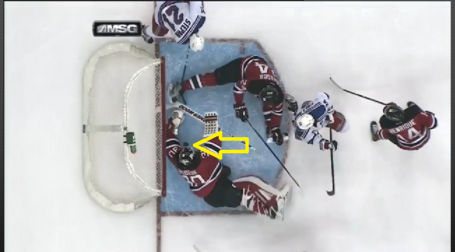 Full video can be found here.

This is a perfect example of Salvador's awareness of the puck. If his foot was just an inch off, the puck would have found its way to the net. Instead, he was calm, looked over his shoulder to spot the puck, and got his skate on it. There may have been some luck involved as well, seeing as it didn't clear the net entirely, but without his effort both Stepan and Callahan had an open net to score in.

It is fun to reminisce on the playoff success Salvador had this year, but it is also amazing to see even just a few examples of the defensive impact he had on the team during the regular season. Plays like this can often be forgotten when a team is winning, but if those goals had gone in the results of these games could have looked very different. The Islanders would have tied the game with 30 seconds left - all but guaranteeing overtime, the Stars would have taken the lead, and the Rangers would have made it just a one goal game. Salvador was simply doing his job when he made those saves, but it shows just some of his value and ability to make plays when they matter most.

Which of the above saves impressed you the most? Do you think it was Salvador's defensive capabilities during the regular season or his offensive outburst during the playoffs that earned him his 3-year contract? Are you excited to have him resigned through 2014-15? Let's discuss!