One Year In, Is Andy Greene Worth The Contract He Signed Before The 2011-2012 Season?

Share All sharing options for: One Year In, Is Andy Greene Worth The Contract He Signed Before The 2011-2012 Season?

During the free agency period in July 2011, Andy Greene, an unrestricted free agent at the time, re-signed with the NJ Devils for a 4 year / 12 million dollar deal. This contract carries an annual cap hit of $3 million per season. The money distribution is slightly backloaded, beginning at $2.5 million last season and growing to $2.75, $3.25, and $3.5 in subsequent years. Andy Greene is not really a flashy player, and this contract brought decidedly mixed reviews among Devils fans at the time it was signed.

In my opinion, Greene had a very solid 2011-2012 season. Some of the things I like about his game: Although he certainly doesn’t have blazing speed, he is a good skater. His play in the corners and behind the net is generally strong and reliable. Greene also seems to recover very well when he does get caught out of position. I remember times last season thinking to myself, "Well, Andy Greene just bailed out… Andy Greene." This is another great quality to have as a defenseman.

Perhaps I am incorrect in thinking this, but my guess would be that reviews are still mixed on the Greene contract. What sort of value are the Devils getting out of this contract? This brings up the question of what type of defenseman in the NHL generally earn around 3 million / year? Are there many defensemen in this price range who pile up the points? Do such defensemen generally eat minutes against toughs? I looked at the performance of 20 other defensemen around the league with a ~ 3 million dollars / season cap hit to try and determine if the Devils are getting decent value for their investment. Please follow along with me after the jump for the data and an explanation of my findings.

From Cap Geek, I got a list of twenty comparables to Andy Greene. Everyone on the list carries a cap hit of between $2.75 and $3.25 million per season. One player, Tom Poti, did not play at all last season. I compared every player on the list in terms of point production, time on ice in all situations, and advanced possession statistics. The data is compiled into several charts.

The first chart is a list of Scoring and Time on Ice from NHL.com. The second chart is advanced statistics from Behind the Net. Please click on any chart to zoom in. 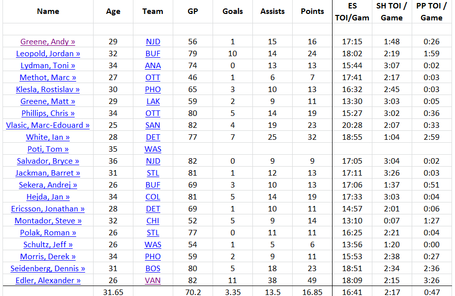 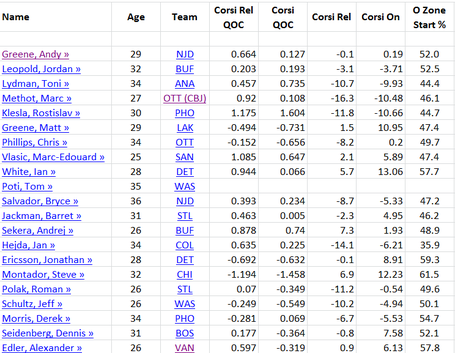 Let’s look first at scoring. Andy Greene put up 1 goal and 15 assists in 56 games last season. He missed over 20 games in December and January with a broken foot. In this respect, Greene was below average in games played, as the defensemen on the list averaged 70.2 games last season. Despite playing 14 less games than the average, Greene was almost right on in point production. The averages for the group were 3.35 goals and 13.5 assists for a total of 16.85 points. If Greene had played the average of 70 games and produced offensively at the same rate, he would end with 20 points for the season.

In general I think offensive production has been one area of disappointment with Greene. He had produced 6-31-37 in 2009-2010 and many people expected him to reproduce those sort of numbers. The thing is, Greene was averaging about 2:30 / game on the power play that season, and that accounted for a lot of his production. There were only 5 players on the list of comparables who scored over 20 points last season. Four of them received very significant power play minutes, ~2:00 / game or more. The other 20+ point scorer, Marc-Edouard Vlasic only got about :30 seconds per game on the power play, but Vlasic is a stud, and a steal at $3 million. In fact, San Jose has already extended him for 2013-2014 and beyond at a cap hit of 4.25 million, which is still a good deal, but more in line with his market value. Overall, I’d say Greene’s offensive numbers seem to check out for a player in his price range, especially considering he wasn’t used much on the power play and only played 56 games.

When it comes to the penalty kill, Greene played 1:48 per game, which was slightly below the average of 2.17. 15 players on the list got more PK time than Greene last season. The Devils leaned heavily on Volchenkov and Salvador for their PK unit, otherwise I think Greene would have seen more minutes. Anyway, it is worth noting that he was utilized slightly less on special teams (both PK and PP) than most people on the list.

Andy Greene did eat up a significant amount of even strength minutes last season. Although he was not at the top of the list, his 17:15 per game came in above the average of 16:41. 7 players averaged more even strength ice time, 12 averaged less. It is pretty easy to pick out a few outliers on either side from this list. For example, Marc-Edouard Vlasic crushed even strength minutes, and not far behind were Dennis Seidenberg and Ian White, and to a slightly lesser extent, Alex Edler and Jordan Leopold. But what type of competition did these players face, and how did they fare?

Six men on this list played what I would consider a shutdown role, meaning they and their partner generally faced the toughest competition on their respective teams. The shutdown D men on the list are Vlasic in San Jose, Rostislav Klesla for Phoenix, Ian White in Detroit, Andrej Sekera in Buffalo, and Jan Hejda in Colorado. The sixth shutdown defenseman was Andy Greene. Along with Mark Fayne, Greene generally faced the opponent’s toughest competition on a nightly basis for the New Jersey Devils last season.

So, how did all of these defensemen fare with such difficult matchups? Basically, White, Vlasic, and Sekera dominated. Greene came out just about even (very slightly south), and Klesla and Hejda got dominated regularly. It is worth noting Hejda was deployed a ridiculous amount in the defensive end, with only 35.9% O-zone starts. Sekera seems to be a solid value for Buffalo, as this was his second season facing tough competition and winning his matchups.

I want to mention that Andy Greene probably wouldn’t have been utilized in such a shutdown role if Henrik Tallinder was not injured for most of the season. The fact that he was able to step up and face the toughs was a very pleasant surprise. Even if Tallinder was on the ice all year, Greene would still be pulling top 4 minutes and the Devils would be getting above average value for their money.

So, out of the 20 (total) defensemen, including Greene, 14 of the 20 were deployed in a top 4 capacity. So the majority of defensemen with a $3 million cap hit were of the top 4 variety, which makes sense. With six in a shutdown role, that leaves eight more playing on their respective team's second pairing or better. The full list of second pairing d-men is Lydman, Methot, Salvador, Jackman, Morris, Seidenberg, Edler, and Leopold. Some, such as Seidenberg and Edler, possibly played second pairing minutes because of depth on the blue line and maybe would be called into a top role on other teams. Leopold played the second most even strength minutes on the team, but also faced the easiest competition out of any Buffalo defensemen. Still, I’ll include him as a top 4 guy, because I think his ice time would have been lower otherwise. So, how did each of these defensemen make out in terms of possession metrics? Leopold did poorly, Lydman, Methot and Salvador got crushed, Jackman came out a little bit behind, Morris got crushed, Seidenberg came out almost even, and Edler came out a little bit ahead. So, Seidenberg and Edler put up advanced statistics somewhat comparable to Andy Greene, the rest of these players, not so much. Greene faced slightly tougher competition than Seidenberg and also fared slightly better. Seidenberg's opponents were just slightly above average.

The remaining six players on this list were used as 3rd pairing d-men whose minutes and competition were limited. These players were Chris Phillips, Matt Greene, Ericsson, Montador, Polak, and Schultz. Matt Greene and Steve Montador came out ahead against pretty weak competition. Phillips, Polak, and Schultz all got crushed against weak competition, and Ericsson came out almost even. I doubt many of these teams, if any, are happy to be paying a 3rd pairing defensemen $3 million dollars a season. The majority of these guys are losing their matchups to boot. I would say that Andy Greene's possession statistics are better than any of these final six, when you take into account quality of competition.

So, Andy Greene was certainly not the most offensively productive player on this list. He was actually just about average. Let’s look at these players who produced more in the scoring column. Steve Montador, Jan Hejda, and Chris Phillips each scored 5 goals and Jordan Leopold scored 10. Hejda has played against toughs for years, but generally gets whipped in the process. The other names mentioned above arenot strong defensive shutdown type players, or even decently reliable defensemen at this point in their respective careers. Chris Phillips played tough minutes for years alongside Anton Volchenkov, but he seems to be declining of late almost as fast as his former partner. Jordan Leopold is earning his money one way or the other by putting up 10+ goals the past two years. He hasn’t faced top competition since 2009-2010, however. I’m not really familiar with Steve Montador’s game, but his splits seem to indicate he was deployed as a power play specialist, maybe sort of a more effective Kurtis Foster, since he actually won his 13 minutes worth of matchups per night.

That brings us to the short list of defensemen who are both more productive offensively and equally or more reliable than Andy Greene on the defensive side for the same price. These are Vlasic, Edler, Ian White, and Dennis Seidenberg. The thing is, Vlasic is already signed moving forward at $4.25 million / season, and Edler is due his payday after 2012-2013 and he will be out of this price range too. Ian White had a very strong season. Not to take anything away from him, but he played alongside Nicklas Lidstrom for most of the year. That has got to help anyone’s numbers. If White produces at the same level this season without Lidstrom, he’s probably moving up in price range too. So out of the four guys in the price range who performed better than Greene offensively and better or close to as well defensively, two are young players due for a bump up in salary, and one spent the season playing alongside arguably the greatest defenseman in NHL history. That leaves Dennis Seidenberg. I like Seidenberg’s game, and I think he is a pretty good value at $3.25 million / season.

Hopefully this puts into perspective the value the Devils are getting in return for their investment in Andy Greene.

How does everyone else feel about Andy Greene? Do you agree with me that the Devils are getting a solid return on their investment? Do you feel Greene is not worth the money? What do you like or dislike about Andy Greene’s game? Are there any defensemen on this list you would rather have instead of Andy Greene? If so, which ones, and why? Please leave your answers to these questions and any related issues or commentary below. Thank you for reading.