Last week, I summarized the third annual summer project of reviewing every single goal allowed by New Jersey Devils goaltender and legend Martin Brodeur. The summary included both his regular season and playoff performance in 2011-12. In 83 total games and 4,864 minutes played, Brodeur allowed 188 goals. The summary goes into more detail on the findings from that review. I want to focus more on one of the main findings of the review: soft goals.

From the very first review from the summer of 2010, I observed and counted certain goals allowed as soft. My criteria for a soft goal was defined as a goal allowed where the goaltender saw the puck coming at him; the shot wasn't deflected in any way; the goaltender was in (or could have been) in a position to make a save; and/or the goaltender made an uncharacteristic mistake that led to the goal. In 2011-12, I counted that 46 of those 188 goals were soft. Just under 25% (24.47% to be precise) of all of the goals Brodeur allowed could and should have been stopped in retrospect.

On the surface, that's pretty eye-opening. Roughly one out of four goals allowed being stoppable certainly doesn't speak well of the goaltender. However, as noted in the summary, Brodeur did play more games and there were months where Brodeur did quite well overall. It wasn't as if soft goals went hand-in-hand with below average monthly performances. (And Brodeur definitely had a few of those in 2011-12). That in of itself is a pretty notable finding: a goaltender may be subject to giving up goals he shouldn't over a period of time regardless of how well he's doing. Soft goals may just happen.

Given that this is the third year of doing this, there's now three seasons of soft goal counts to compare. We can see whether or not Brodeur has been giving up more soft goals than he has in the past. It wouldn't be that surprising of a thesis. Brodeur's not getting any younger; and since he played as much as he did in 2011-12, the possibility of soft goals allowed increased. Of course, we must look at the data to see whether that's true or not. Please continue on after the jump to see how the soft goal count for Brodeur in 2011-12 compares with what was found in the 2009-10 and 2010-11 seasons.

In just looking at each season summary, it appears that Brodeur's highest percentage of soft goals allowed (GAs) happened in 2011-12.

While Brodeur had an extended playoff run in 2011-12, he also didn't play nearly as much in the regular season compared to two seasons ago. Between 2009-10 and 2011-12, there is some evidence to believe that Brodeur has gotten worse. While he's allowed five more goals in one additional game in 2011-12, the real sticking point is the number of soft goals. Brodeur gave up an additional 12 softies compared to a similarly long campaign from two seasons ago. That cannot be denied. While Brodeur was no young hotshot at age 37 in 2009-10; we can say he was better then. I don't think we can or should discount the possiblity that time is taking some toll on Brodeur's performances. After all, Brodeur only had one sub-90% save percentage month in the 2009-10 regular season compared to three sub-90% months in 2011-12.

Of course, 2010-11 sticks out in the middle and makes that conclusion a little more complicated. Like in 2011-12, Brodeur did get injured in 2010-11 and didn't even appear in 60 games in the regular season. Unlike 2011-12 and 2009-10, Brodeur's season did not extend into the playoffs so that was that. To remind those who don't remember or have tried to forget, the Devils were an awful team in the first half of the 2010-11 season under John MacLean and clawed their way back to respectability under Jacques Lemaire in the second half of the season. Despite all of the poor results, I didn't find as many soft goals as I did in the other two seasons. In terms of soft goals, Brodeur was at his best in the team's least successful season since the 1980s. Keep in mind that Brodeur was 38, so if there's an aging affect, it may only be happening now and it may extend into the future.

Given the disparity of playoff games - games against good to great teams in a short amount of time, I decided to cut out the playoff goals allowed and compare regular season data. I also split it up by month to see if there's any truth to the notion that Brodeur has slow starts in terms of allowing soft goals. 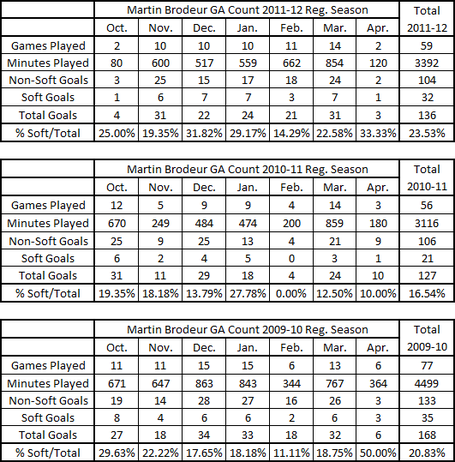 The totals don't change too much when only looking at regular seasons. Brodeur gave up more goals in total and soft GAs in 2009-10, but he also played in many more games than in the other two seasons. The larger population size of games played would lead to higher totals in both. His percentage of soft GAs was pushed up only a little bit to 20.83% with 35 out of 168. In 2011-12, Brodeur's soft GA percentage dropped a little to 23.53%, 32 soft ones out of 136. 2010-11 remains the same from the summary as the Devils only had a regular season then. Overall, it appears that cutting off the playoffs doesn't really change the main finding that Brodeur has given up a larger percentage of soft goals in 2011-12 than he had in either of the past two seasons.

Interestingly, I thin there is something to the notion that Brodeur starts slowly with respect to soft goals. Brodeur's second highest monthly percentage of soft GAs and most monthly soft GAs in 2009-10 was in October. In 2010-11, Brodeur's second highest percentage of soft GAs and the most soft GAs he would give up in a month also came in October. 2011-12 breaks that trend as Brodeur was injured for most of October and his first full month of action wasn't near his worst in terms of soft goals - not that it was any good, to be frank. Brodeur's worst month for soft goals was actually in December. I guess that little something isn't necessarily true.

The last main point I want to highlight with this chart is that if Brodeur plays more than just a portion of a month, then he's due to give up some soft goals. Excepting the months where Brodeur only played in five or fewer games over the last three regular seasons, Brodeur has allowed at least three soft goals in a month. Even in those excepted months, Brodeur did not allow a soft goal in one month: February 2011 when he only played 200 minutes across four games. The most he's ever allowed in a month in the last three seasons is eight and it's common to see five to seven soft goals allowed in full months of action. As much as we want to see Brodeur not give up soft goals, the data suggests it's really inevitable. They're going to happen.

Therefore, the hope has to be that Brodeur can reduce them in some way or form, or that the rest of the team can support him such that they don't lose because of those soft goals. It is a thought that came to me while doing the summary of 2011-12, but it really does stick out while looking at the soft goal counts across all three seasons. The past data supports it and I'm sure a fourth season - assuming there will be one - will justify that conclusion. Additionally, I wonder if it holds true for other starting goaltenders.

In any case, the data for soft goals at least suggest that Brodeur isn't getting any better. While 2010-11 saw a reduction on soft goals from 2009-10; that percentage blew up in 2011-12. In comparing and contrasting all three seasons, Broduer has gone from roughly allowing one soft goal out of five goals in 2009-10 to roughly one soft goal out of four in 2010-11. Even taking out playoff data, 2011-12 looks the worst. All three seasons easily prove that the majority of goals allowed weren't soft; but increased percentage is concerning to say the least. It's also concerning that the first three months have a higher collective percentage of soft goals allowed than the rest of the regular season in each of these three seasons. It suggests that Brodeur really does need time to get into a groove; time the Devils may not always afford to have.

While I admit this isn't necessarily the best way to evaluate a goaltender, it's another way to show how Brodeur has been performing in net. We can be sure that Brodeur will give up soft goals in future seasons and that he has done so prior to 2009-10. However, an even older Brodeur may yield even more in 2012-13, whenever that happens. Did I miss something from comparing all three seasons? What did you discover from the data presented? How do you think Brodeur has performed over the last three seasons? Is he worse off now than he was in 2009-10? Please let me know your answers and other related thoughts in the comments. Thanks for reading.