Albany Devils Talk: How will the A-Devs replace their lost scoring?

Share All sharing options for: Albany Devils Talk: How will the A-Devs replace their lost scoring?

At first glance, with Vladimir Zharkov signing in the KHL, Nathan Perkovich signing in Europe and players like Steve Bernier, Mattias Tedenby, Stephen Gionta and Peter Harrold slated for NHL roles Albany is losing a decent percentage of their goal scoring, power play goals and shots on net.

Albany was 28th in the AHL last year in goals with 190, only 5 ahead of the lowest scoring team in the league. They were 29th in power play goals converting at a 14.4 rate with 47 total goals. Their shots for rate of 30.82 per game were a little better, landing them in the top half of the AHL.

After the jump we will look at the goals, power play goals and shots generated by the players who have left Albany. We will also look at four players that will be new to the Albany team in 2011-12 and some current players who will have an opportunity to step up in their sophomore season. 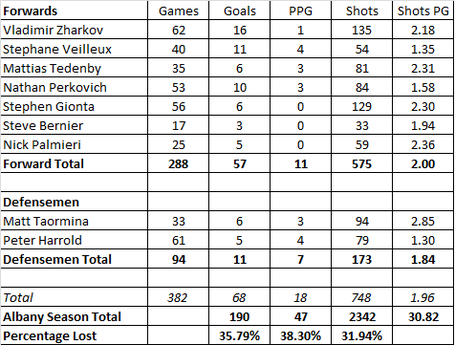 With the losses of the players in the chart above Albany is losing 68 goals (35.79% of their season total), 18 power play goals (38.30%) and 748 shots (31.94%). Some of the difference will be made up by players who underperformed last season like Matt Anderson, others like Tim Sestito will likely contribute a few more goals just from being with the team a few more games last season.

It will really be up to some new personnel to help combat the loss of the players above. Thus far, the Devils have added three players to their roster with another slated to play in his first full AHL season.

(Note that I have not included Alexandre Carrier, signed to an AHL deal a few weeks ago, to the list below as he is more of 4th line fighter, not someone who will generate offense. Here are his stats via eliteprospects.com)

Harri Pesonen-Wow, until I dived into his stats on the Finnish Elite League website I didn't realize how many shots he put on net. In the Finnish league he was tied for ninth overall in total shots during the regular season with 288. (In the above table I combined his playoff/regular season totals) With 27 goals over 74 games and almost 4.5 shots a game, Pesonen is primed to be one of Albany's top scorers this year. The only area to watch with Pesonen is his shooting percentage. He shots alot, and he needs to because he converted at less than a 8% rate last year and less than 6% (188 shots in 54 games) in 2010-11.

Kelly Zajac-The undrafted free agent out of Union College isn't a prolific goal scorer, but he did average almost two shots a game during his senior season but is known as more of a playmaker/defensive forward anyway. I would imagine he will play on the third line to start the year off in a position to stop other offenses. I am hopeful that his defensive acumen (he was one of the top defensive forwards in the NCAA) might help him and his line keep the puck out of their own end and push it towards the other net. He may not generate a lot of shots, but I think he may prevent a whole bunch.

Phil DeSimone-Formerly a 2007 third round pick of the Washington Capitals, DeSimone wasn't signed by the Caps and spent last season on an AHL contract with the Hamilton Bulldogs. His stats last year were unspectacular at best, but he does offer some scroring depth as he scored 16 goals last year. He attended the Devils prospect camp as an invitee and was signed to an AHL deal soon afterward. Looking back to his NCAA career he played at the University of New Hampshire with his new teammate Mike Sislo, sometimes on the same line. He looks to be a nice option that can play in the top six group of forwards should others get injured or play poorly.

David Wohlberg-The Devils sixth round pick in the 2008 entry draft got his feet wet in the AHL at the tail end of last season. At Michigan he was their top scorer with 33 points and averaged just over two shots per game. In his four years at Michigan Wohlberg scored 56 goals in 162 games, a .35 per goal a game rate.

Now that we have looked at the four new faces that will be with Albany this year, let's take a look at three players who might be primed for a breakout in their second AHL season.

Mike Hoeffel-It was a frustrating season for the Devils 2007 second round draft pick. While injuries derailed the beginning of his season he was just never able to generate any consistent level of play as he finished the season with 5 goals in 50 games played. With departures from the top six groups of forwards the opportunity is there for him to earn more playing time. At the very least, I would expect him to score some power play goals as he can use his size to create favorable position around the net.

Mike Sislo-In his rookie professional season, I thought the former New Hampshire standout did well. Sislo, one of the few right handed shooters we can consider a NHL prospect, will have every opportunity to build on his solid campaign. With a full year of health and increased ice time I think he can approach the 20 goal threshold this year.

Joe Whitney-What a pleasant surprise Whitney was last season. After an up and down college career (5 goals in 2010-11, 17 in 2009-10) the 5'6" Whitney was one of Albany's best players last season leading the team in shots and points. The question on Whitney is whether he will develop better after a year in the AHL playing top minutes or if last year is as good as it gets. The answer is somewhere in between. I think Whitney can improve a bit, but I would be cautious in thinking he jumps up to a 25 or 30 goal scorer at age 25. Albany needs Whitney to play as well as he did last year, possibly adding 5 goals to his total.

With a combination of new faces and players who have experienced the AHL last year, I think the Albany Devils have made up for their lost scoring and then some. Pesonen will make up a big chunk of both shots and goals with players like Sislo and Zajac also making solid contributions.

The one area of concern I would have at this point is the 7 power play goals generated by defensemen who will no longer be with the club. With a team that had a bad power play unit to begin with, losing 15% of your power play goal production is never a good thing, especially from defensemen. With the defensive unit at Albany mostly set and those defensemen on the roster not having the offensive skill set of a Taormina/Harrold, the Devils forwards will simply be forced to contribute much more to the Albany power play this year.

So now it's your turn. Do you think the Devils added enough offense to compensate for the players they lost? Out of the new players who are you most excited about? Which sophomore is primed for more of a breakout, Sislo or Hoeffel?