The Fallout from Free Agency, Are the Devils Worse Off Without Parise?

Share All sharing options for: The Fallout from Free Agency, Are the Devils Worse Off Without Parise?

Yes, another article that talks about Zach Parise.

No, it is not a sign of the apocalypse. However, the Mayans did predict something big to happen this year.

Why continue to talk about Parise? Because I'm going to prove to you, that the New Jersey Devils are better off without Zach Parise and his monster of a contract. Sure he is good, but $7.5 Million a year good? I think not.

An aside: After this summer, I won't need to talk about Parise, because Kovalchuk will be playing first line left wing, where he belongs: making Parise look very, very overpaid.

First I'll post this picture from CapGeek and let you know who in the NHL has the highest cap hits in the league. Then we can compare from there. 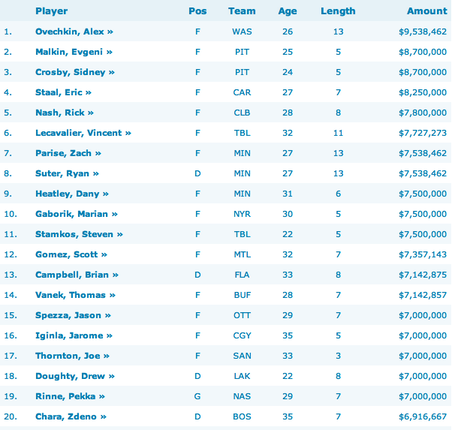 Congratulations Zach Parise, you are tied for the 7th largest cap hit in the NHL with your new teammate, Ryan Suter!! It is now near impossible to build a team of competent hockey players around you. Also, Dany Heatley gets paid about the same as you as well.

I took the players with comparable cap hits, CapGeek is great for these types of comparisons, and looked up a few lifetime stats to compare them by.

Parise is the second youngest on this list after 22 year old sniper, Steven Stamkos. Who, in my opinion, may be the best player on this list. Parise's points per game is the third lowest on this list. and his shooting percentage is the lowest, except for the monumental failure that is Scott Gomez.

I also added Ilya Kovalchuk onto this although his caphit is about $800,000 less. Kovalchuk has played close to 800 games in the NHL and is a proven goal scorer. He has the most goals since the lockout, by any player and has a lifetime PPG of 1.008. Knowing this, the Kovalchuk contract looks splendid compared to what he would go for on today's free agency market.

So, the Minnesota Wild got one the most coveted free agents in the last few years, but at what price? The Wild have about one third of the cap spent on three players (Parise, Suter, Heatley). It will be awfully hard to build a team with the remaining cap space.

The Devils have plenty of space for next year, when they have nine free agents hitting the market. So is it really all that bad that Zach left? Ya it hurts, but he went to the Western Conference against a team that you can't really hate... He could have went to a handful of other teams that would have slapped us fans in the face. But he went home, wouldn't you do the same?