ILWT Audition 2012: Off the Radar - A Devil in Disguise - Dainius Zubrus

Share All sharing options for: ILWT Audition 2012: Off the Radar - A Devil in Disguise - Dainius Zubrus

Earlier this month, I put out the call looking for new writers for In Lou We Trust to write about the New Jersey Devils. I've opened up the audition to the community at large in order to get some new perspectives and additional voices on the front page with regularity. Since then, I've received eleven entries. Regardless of how they're received, I thank the writers of each and every one of them - you know who you are - for stepping up and submitting an entry.

Throughout the next two weeks, I will post each one under an anonymous name so you can discuss and critique the post without regard to who actually wrote it. I can ensure you that I did not change any of the content outside of formatting it in to the SBN platform. To that end, please note that I don't necessarily agree with what the posts actually say. I'm just letting them stand on their own. Please be constructive in any criticism and do offer your thoughts about whether you liked (or disliked) the post in addition to discussing it's content. Don't be mean, but be fair.

This fourth entry comes from Writer D Karen Meilands, who made their submission on July 16. This post is something the writer thinks could be a regular series: highlighting underrated players. In this submission, Dainius Zubrus is the subject - complete with a visual example as part of the explanation. Find out what made Zubrus stand out to Writer D Karen after the jump.

When a goal occurs in any sport the first question asked is "who scored?" The three stars of most hockey games are usually the men who put the puck in the net, or the guy who kept it out the most. Sometimes, the most crucial players are forgotten once the score sheet is released. There is always a player who sets up the play that creates the goal, and they aren't always given the credit they deserve.

During the 2012 playoffs, there were many important pieces to the Devils run to the Stanley Cup Finals. There was one individual player who seemed to have a hand in at least half of the goals scored - even if his name didn't make it onto the score sheet. Whether it was from his relentless forechecking, his physicality and brutal hits, or a perfect pass, Dainius Zubrus' play often went unnoticed even though it was imperative to the puck going into the net.

On Tuesday, May 1, 2012 Adam Larsson played in his first NHL playoff game against the Philadelphia Flyers. Although he probably should have gotten his opportunity sooner, he really took advantage of the moment and scored the Devils first goal of the game in the 3rd period to tie the game 1-1. Where did Zubrus come in? He assisted on the goal. Take a look at the screen shots below: 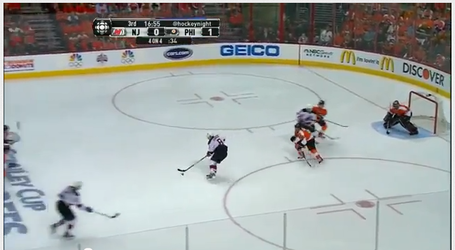 At 16:55 of the 3rd period, Zubrus was carrying the puck across the ice with a decent opportunity to shoot. 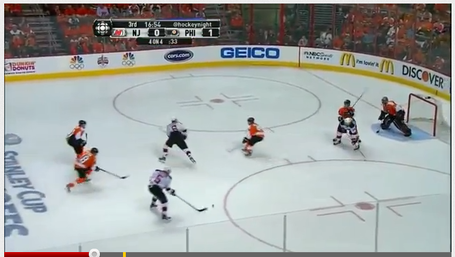 Instead of shooting, Zubrus saw Larsson entering the zone with a better shot than he had. He passed the puck back to Larsson who took the quick shot to tie the game. This goal lead to a scoring frenzy from the Devils who ended up winning the game 4-1 and tying the series 1-1 before they won the next 3, and the series.

Here is an example of Zubrus' work ethic - even when it doesn't get his name on the score sheet:

After taking down the rival Flyers and Rangers, the Devils met with the LA Kings in the cup finals. In game 4, after being down in the series 3-0, the Devils were in dire need of not just offense, but a lot of it. It was do or die, and the Devils did (at least for a while). 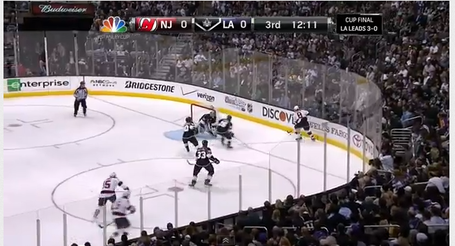 The game was tied 0-0 going into the 3rd period. During the Devils playoff run, their relentless forecheck was what stood out the most and got them to the finals. Zubrus used that to help the Devils take the lead. Above, you can see Zubrus on the boards as the rest of the team comes into the zone to back him up. 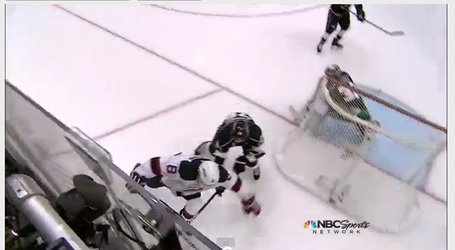 A King came in to challenge Zubrus with the puck. 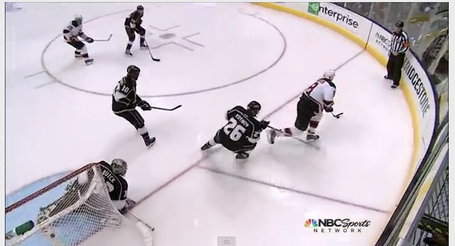 After shaking off his opponent, Zubrus brought the puck out from behind the net and passed it up to the point. Salvador took a shot from the point and after a few deflections, Elias got it in the net. This goal would not have happened without the work ethic and persistence of Zubrus.

When you think of the most important members of the Devils squad, there are many men who are easily overlooked. Zubrus is definitely one of them. He takes some penalties that aren't always necessary, but most of them occur from his physicality and presence on the ice. The two examples above show his selfless play and importance to the Devils getting ahead. He makes the players around him better and sets up the pretty goals by doing the dirty work.

Editor's Note: Now that you read Writer D Karen's post explaining that Zubrus brings value to the team despite being overlooked at times, I want to know what you think. Do you agree or disagree with Writer D Karen's argument? What did you think of how Writer D Karen wrote this post? Did you like or dislike the visual examples, and were they enough to stand on their own? Based on how it was written and what was it about, is this the kind of post you would want to see regularly at In Lou We Trust? Please leave your answers and other comments about this post in the comments. Thanks go to Writer D Karen for the submission and thank you for reading.