As you may or may not know, the New Jersey Devils are not eliminated just yet. They defeated the Los Angeles Kings 3-1 in Game 4 on Wednesday. This means there will be a Game 5 at the Prudential Center on Saturday, June 9. It's going to be an important game as a Kings win would result in a Stanley Cup ceremony and a Devils win would extend the series. If you have the chance to go, then I highly suggest coming to the Rock on Saturday.

But what if you don't have tickets? As you may or may not know, SB Nation partner TiqIQ provides all kinds of pricing information of tickets on the secondary market. The fine people at TiqIQ have provided me with a chart of the current pricing trends along with some general data. Believe it or not, the prices have gone down since the series began. 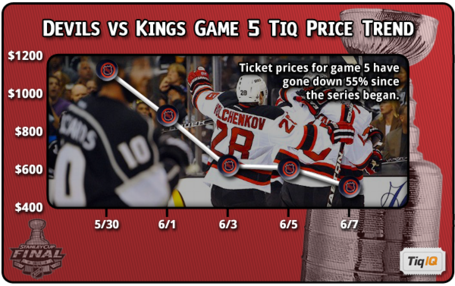 However, that doesn't mean they are particularly cheap. It really shouldn't be a surprise given the magnitude of the game. Here's some general notes from TiqIQ about the current secondary market.

Here's a direct link to the TiqIQ set-up if you want to get tickets for Game 5. My recommendation is that you don't delay if you're interested in getting tickets for Saturday's game. They're not likely going to get cheaper. In fact, by the time you read this, the lowest price may no longer be $216. So please check it out. And if you already have your tickets, make you sure you come to the Rock, have a little hope, and support the team. Why? Why not?

And now a hockey related question to pass the time: Travis Zajac is struggling. A scoring correction gave him a primary assist on Ilya Kovalchuk's empty net goal in Game 4 - his first point of the Stanley Cup Finals. He's got exactly one shot in each of the four games in this series; he's been out-dueled on faceoffs in Games 1 and 4; and his Corsi in each of the four games were -9, -4, +3 (note: score effects took the Devils to +20 in Game 3), and -7. Is he just struggling against getting matched against either of Los Angeles' top centers? Is he just cooling off after doing so well earlier in the postseason? Could it be something else? Let me know what do you think in the comments.