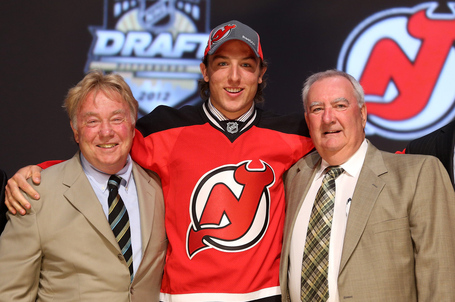 With the amount of second guessing of the coach, GM and scouting staff's decisions that I read here (comments and FanPosts) on a regular basis, it leads me to believe that some of you clearly must know more, and are better skilled for any of these position than those who currently occupy them.

Some of you have had such vehemently strong opinions on this year's draft picks that I'm left with no choice but to assume you've been scouting these kids for your own amusement for years to flat out know that our 1st, 2nd, 4th or whatever pick were horrible choices.

So with that said, I'm curious... Why are you posting such strong opinions on the team's moves (good or bad) instead of working professionally (in some capacity) for either pro or junior/college hockey? Some of you clearly feel your acumen of the various aspects of this game is at a professional level. So why are you not exercising it there? Why isn't that you up there in the picture beside Stefan Matteau? Or behind the desk on the draft floor?

I've watched people rip apart things from the Zidlicky trade to DeBoer's coaching moves. But in the end this was a team that went to the Cup Finals with their best player clearly injured. So the guys in charge must know a thing or two about what they're doing right?

I get it, sport fans like to rant. I rant (i'm doing it right now) But i'm curious if you ever read back what you've said and think how silly it sounded? Or does it ever dawn on you that you may not know as much about the game and it's players as you think you do?

P.S. This is in no way directed at any of this site's editors, who for the most part are pretty level headed and try to exercise objective reasoning on almost every move this team makes. It's for, well... you know who you are!

P.P.S. This in now why is to imply I think Matteau is going to develop into a great pick by the Devils. Just to highlight that I do not know enough (and know I don't know enough) to even begin to make a qualified call or even informed opinion whether an 17 year old kid i've never seen play before was a bad choice or not.