A Look at the 2012 UFA Goaltenders: A Lot of Backups & One Starter

Share All sharing options for: A Look at the 2012 UFA Goaltenders: A Lot of Backups & One Starter

Both Martin Brodeur and Johan Hedberg of the New Jersey Devils are impending unrestricted free agents this summer. Both are old - Brodeur is 40, Hedberg is 39 - and both would like to stay even though it's an open question whether they'll keep playing. Brodeur was the starter and Hedberg was the backup. Replacing either won't be easy either from within or from the free agent market. I don't think it'll be easier even if both do return for another season.

The impending unrestricted free agent class of goaltenders for this summer is thin. Brodeur is the only starter on the market. He was the only one who actually played more than half of the season in 2011-12. You could argue some of the other goaltenders could do it; but it would be a big risk to increase their workload. Especially since most of them didn't do so well even in a backup role.

After the jump, I compiled a list of UFA goaltenders and their cap hit from season from CapGeek and included their stats from last season from NHL.com. As you'll see, there's a lot of backup caliber goaltenders were cheap last season and likely will be again.

Again, all of the following numbers in this chart come from CapGeek (UFA status and cap hit) and NHL.com (the other stats). This chart includes goaltenders who played at least five games last season. This means UFA goaltenders Cristobal Huet, Antero Niittymaki, and Michael Leighton aren't on this chart since they didn't play a single minute in the NHL last season. This also means David McIntyre, Yann Danis, and Curtis McElhinney aren't listed either either. 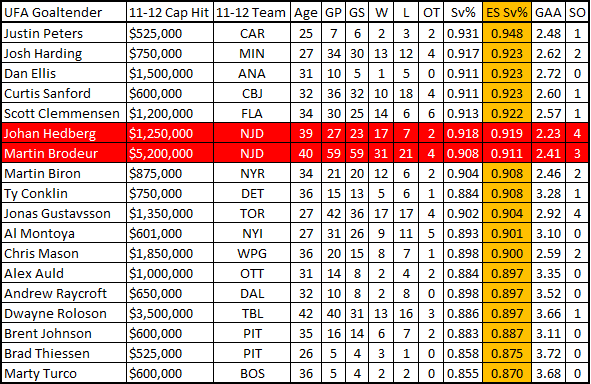 Brodeur didn't have very good numbers last season and he's actually one of the better guys on this chart. He also played a lot more than everyone else. Let's start with everyone above him who had a better even strength save percentage - a good means of determining who's done well at stopping pucks despite their team's performance.

The top of the list is former first second round draft pick Justin Peters. He appeared in seven games, so his percentages should be taken with a grain of salt. More salt should be added when you consider his 12 appearances in 2010-11. In that season, his even strength save percentage was a horrendous .891 and his overall save percentage was even worse at .875. As the youngest goalie on the market, one could argue he's got some future. However, I can't imagine how much more he can develop at age 25.

Josh Harding is a more intriguing option. He's only 27 and he did have a good season backing up Nicklas Backstrom on a Minnesota Wild team that didn't think pushing the play forward was necessary for success. However, I'm concerned that this is a high mark for him and not necessarily indicative of his play. Here are his career numbers at NHL.com. He's only played 117 NHL games and his save percentage as a backup in Minnesota has jumped from the high .900s to the low .920s. He did suffered a significant knee injury that kept him out of the 2010-11 season, which contributes to his lack of games. Harding may have the talent but I'm really not certain he can be a starter. As a backup, he could be fine but he also could be more expensive. I expect he'll have plenty of suitors and if all the Devils see him as a potential replacement for Moose, then they have safer options.

Dan Ellis and his 10 games last season isn't impressive. Neither is the fact that he was around an overall save percentage of .900 over three seasons before that, also in a backup role. I doubt he'll command anywhere near his $1.5 million salary, so he could be had for cheap. Curtis Sanford is a much better option as a backup by this chart. He's experienced, he can be had for cheap since he's coming off a $600,000 cap hit, and his .923 even strength save percentage indicates that he can perform quite well. In fact, he was Columbus' best goaltender last season. However, I'm put off by the fact that he spent 2009-10 and 2010-11 entirely in the AHL and he's never had a save percentage as high as .911 with his other stints in the NHL. Columbus should do what they can to keep him, so he may not actually be available.

Scott Clemmensen is arguably the best goaltender on the market. Like Sanford, he's experienced as a backup goaltender. Unlike Sanford, Clemmensen has maintained an overall save percentage of at least .910 in his last four seasons. That's the kind of quality and consistency you want in a backup goaltender, someone who can step in on occasion and perform pretty well. In addition, Clemmensen was a Devil before, backing up Brodeur in 2005-06 (it didn't go well) and filling in for him as the started in 2008-09 when Brodeur suffered a significant injury. He even got some playoff minutes - the only non-Devil on this chart to have done so - and did quite well (but thankfully not too well). The only issue I have is that he got $1.2 million last season and he'll likely want somewhere around that again. I'm not a fan of committing that much space to someone who will only start 25-30 games, but the Devils made it work with Moose. They can make it work with Clemmensen.

And it really does need to be Clemmensen if the Devils want to pick someone up from free agency. There really isn't a viable goaltender on this list that did worse than Brodeur and Hedberg last season. Jonas Gustavsson was the only other goaltender to appear in more than 40 games that's becoming a free agent and he's just bad. Dwayne Roloson and Marty Turco may have been starting goaltenders much earlier in their careers but they are way past it now. Martin Biron could bounce back from this past season (overall save percentage in 10-11 was .924) but he's definitely a backup now. I think it's now really safe to say that Al Montoya will not meet his potential as former first round draft pick. Alex Auld, Andrew Raycroft, Brent Johnson, Ty Conklin, Chris Mason and Brad Theissen are just flotsam. Guys you hope can give you some decent performances, but I don't think anyone can expect them do particularly well based on last season.

From the perspective of the Devils, that so many backup goalies are impending unrestricted free agents leads me to a number of conclusions. First, it wouldn't be the worst thing in the world for Martin Brodeur to come back for one more year. He may not be as good as he once was. He may need a couple of months before he puts up good numbers like last season. He may need to split time as he did last season. He's the only guy on the market who was a starter last season and could be again. Replacing him was always going to be difficult and doing it this summer is even tougher. I just hope he'll do it for much less than $5.2 million - and he just might if it's explained to him that it'll free up space for other players. He's deferred money before, he may do it at the negotiating table again.

Second, it also wouldn't be the worst thing in the world for Johan Hedberg to come back either. He actually was one of the better impending UFAs based on last season's performance. As a backup, Moose did quite well. I think it's much easier to replace him; but there will be some risk with anyone else from this list that they choose unless the Devils go out and get Clemmensen. They could make it work with, say, Biron, Harding, or Sanford; but it's not necessarily an upgrade outside of the other FAs being cheaper and/or younger. There are backups available, but the quality is all over the place.

Third, it really is a problem to solely rely on free agent market for goalies from year to year. This summer is a good reason why a team shouldn't do that. The group available isn't that good. Teams that need significant help in net may have to make a big deal for a goalie or roll the dice with a prospect. As an example of the former, Tampa Bay made a significant one on Friday for Anders Lindback; someone who's not necessarily a proven starter, but has shown a lot of potential as just a backup. Yes, a backup with potential cost the Lightning three picks and a throw-in (Caron, who is an UFA). They had the extra picks, but it's still quite a lot for someone who got 16 appearances and a .919 even strength save percentage last season. The market does looks a lot better in 2013, but a lot can change between now and next summer. I imagine a number of these guys will get extended next season and a poor (or excellent) season could dramatically shift who they should sign. Being at the mercy of the free agent market can be harrowing. The Devils can avoid it, provided that at least one of their goaltending prospects pans out or they find someone outside of the NHL that could become somebody.

Fourth, I still think 2012-13 is the season for Keith Kinkaid or one of the other goalies in the system to get a real shot at the #2 role. If Moose doesn't return, the Devils could save a small amount of money, give some actual NHL experience for one of these guys, and determine whether they have a future on this team. Again, all a backup really needs to do is to come in and not be abjectly bad on most nights. That shouldn't be a big problem for most goaltenders who are actually NHL-caliber.

One final note, you'll notice I didn't mention restricted free agent goaltenders. According to CapGeek, there are younger, better goaltenders like Carey Price, Tuukka Rask, and Corey Schneider who are up for new contracts. Well, that's partially because this is about UFA goalies. The other reason why I'm not interested in them is because anyone who's good will almost definitely will be qualified by their current team. Price, Rask, and Schneider will almost definitely remain on their current teams for next season. Anyone who isn't qualified is likely someone that isn't likely at all to make it at this level. The Devils don't need to sign those kind of goaltenders.