Since the departure of Brian Rafalski half a decade ago and to a lesser degree Paul Martin two years ago, the Devils defense has struggled to produce offense for the New Jersey Devils. In the past few years the Devils have tried to catch lightning in the bottle with low risk acquisitions like Cory Murphy or Kurtis Foster to jumpstart both the power play and offensive zone starts with mediocre results. Typically the regular season defensive group has ranked in the bottom third of the league in both even-strength and power play point production.

11 games in, the 2012 playoffs seem to be different. With trade deadline acquisition Marek Zidlicky, rookie Adam Larsson (and before him Peter Harrold) and Andy Greene the Devils now have a group of defenseman, one on each defensive pairing, who can help generate offensive opportunities either through their point shot or jumping in the play when needed.

How has that translated on the score-sheet? After the jump I will compare regular season scoring and playoff scoring for the Devils defensive unit.

Below are individual player performances for Devils defensemen in the playoffs (top group) and regular season (bottom group). 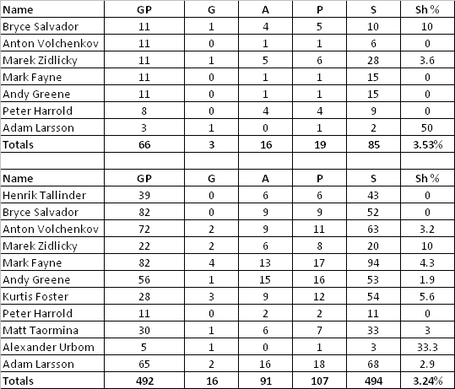 Note that Peter Harrold had an assist on a goal in game 2 when he was in the lineup as a 4th line wing. He was actually playing defense with Larsson when he got that assist so I have kept that point included above.

Neither set of numbers really jump out at you. Individually some of these performances are unsustainable (Bryce Salvador's point production, shooting percentage come to mind) but collectively I think they show some positive trends so far in the post-season.

I think we get a better idea of how the defensive unit has performed in the playoffs based on averaging out the production per game.

While it's true that the playoffs are such a small set of games and a goal or two can drive statistical evaluations dramatically in one direction or the other, I believe the numbers represented above show a positive trend, specifically in shots generated per game. In the playoffs the Devils are generating almost 1.75 shots more per game than they did in the regular season, led by Marek Zidlicky who is getting 2.55 shots to the net each game.

More shots=good. The Devils have won every game they have outshot their opponents this post season.

This seems to suggest that the Devils defensive unit is both getting shots through from the point and capitalizing on the times they go below the top of the circles in the defensive zone.

The Devils don't have an Erik Karlsson, Shea Weber or Drew Doughty type player on their blue line right now, but what they do have is a great balance of defenseman who are strong in their own zone and who can jump on offensive opportunities that present themselves.

Special stick tap to David Sarch (he of Talking Red fame) for helping out with the stats/ideas behind this post.