Share All sharing options for: New Jersey Devils Prospect Report: Looking at Goalie Experience Before Playing in the NHL

Whether it's Maxime Clermont, Keith Kinkaid or Scott Wedgewood Devils fans are a combination of anxious, excited and downright fearful of the future without hall of famer Martin Brodeur in between the pipes. The good news is that all indications are that Brodeur will return next year. But the question still remains, especially given the injuries Brodeur has had the last two years, who will be the next Devils starting goaltender once Brodeur retires.

That's too tough of a question to answer at this point. Instead of speculating on who might take the job I would rather answer a question that relates to the future goaltending situation for the New Jersey Devils. It's a question that frequently asked in the comments section of prospect posts this year:

When will Wedgewood/Kinkaid/Clermont be ready?

Ready is hard to define. It's based on a number of factors, a number of which are hard to quantify. One area we are able to look at is how long it has taken some current NHL goalies to get to the NHL. I think by looking at that number we can get a general sense of when we might see one of Kinkaid, Clermont or Wedgewood get their test at the NHL level. This of course assumes they perform well enough both statistically and in the eyes of the organization to warrant a promotion. A goalie can play as many games as they want, but if they have a sub .900 save percentage in the AHL, I don't think they are getting promoted.

After the jump, I will look at other NHL goalies, the feeder/development league they originated from, and how long it took them to work through the AHL or other leagues before becoming NHL goaltenders.

Listed below are the goalie's name, his team, the feeder/development league he came through, and the number of games he then played in the American Hockey League, European Elite Leagues or East Coast Hockey League after his development time ended. All games played/information was captured from www.hockey-reference.com

Notice that I have chosen an arbitrary list of goaltenders below based on a 'Would I want this guy in goal for my team' type thought process. That's why you don't see a Maple Leaf goalie listed. There are 37 active goaltenders below. 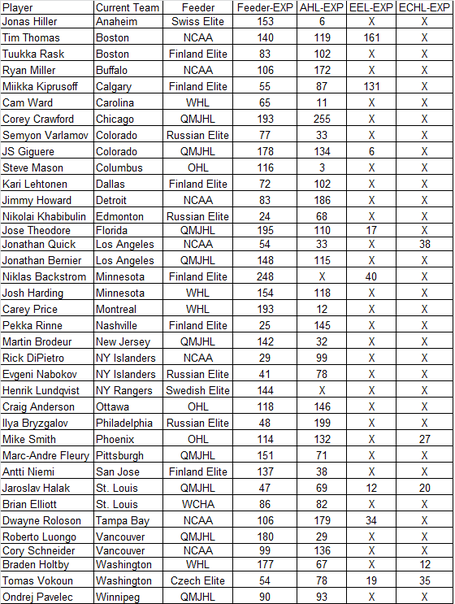 Note that often the European Elite Leagues is both a combination of a feeder league and professional league. For example both Henrik Lundqvist and Jonas Hiler went almost straight from their Elite League teams to their NHL clubs. This is much rarer for goalies that play in the CHL/NCAA. They end up playing in a time-share situation in the AHL, and sometimes the ECHL, before making it to the NHL.

Most goalies played a similar amount of games in their development league but take a look at guys like Halak and especially Quick. Sometimes guys don't need as many games in the minors as others.

While it's hard to accept the average AHL development time of a goalie from a specific league as a standard, primarily because of the small number of goalies we are looking at, former journeymen goaltenders who spent extensive time in the minor leagues and CHL goalies like Ward, Brodeur, Mason or Price who spent minimal time in the minors before going to the NHL, but I think it offers a decent barometer of how much playing time a goalie might need before making it to the NHL. Below I look at the number of goalies, the percentage that number represents out of the sample and the average AHL time each goalie had broken down by feeder league. 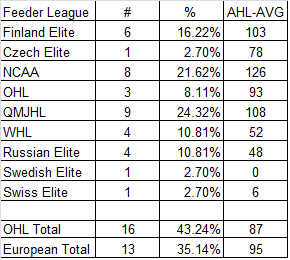 If one assumes that in a typical AHL time share situation that a goalie would play 40-50 games per year then a goalie should probably only need 2 to 3 years of AHL time before being able to make the jump to the NHL. From the small sample above players like Price, Mason and others made quick work of the AHL (perhaps in the case of Mason, too quick) and jumped to the NHL in less than a year.

The Devils Stable of Goaltenders:

Let's circle back to the question posed in the introduction: When might the three Devils goalie prospects be 'ready'?

Clermont-After playing 219 games in the QMJHL there was not a lot of playing time available this year for Clermont. You can argue that he didn't deserve additional playing time with a .891 save percentage playing for the Kalamazoo Wings of the ECHL, but its important to understand that the Kalamazoo starter, Riley Gill, had a .903 save percentage, not exactly great himself.

For those of you who think that simply by playing in the ECHL he isn't an NHL caliber type goalie, I point you to Jonathan Quick of the Los Angeles Kings who played there for 35 games a few years back and had a pedestrian .905 save percentage.

That said, Clermont didn't distinguish himself enough this year either to warrant a promotion next year to the AHL. He will likely have to wait in the 'Wings' next year again for an injury to give him a shot to move up. If he doesn't get the opportunity to develop in the AHL soon, his opportunity with the Devils might be blocked by Wedgewood/Kinkaid's development.

Kinkaid-After playing 63 games in two seasons at Union College, Kinkaid played 42 games last year for Albany. He's a little older than the other two prospects the Devils have (23 to start next year) and he should shoulder the load of starts next year unless injury or poor play derail him. This season should be a good judge on whether or not Kinkaid can raise his game up enough to be considered for NHL duty.

Wedgewood-Unless the Plymouth Whalers bring him back as an over-age player (which would be a surprise considering the depth they have at goaltender with Matt Mahalak) Wedgewood, who recently signed an Entry-Level-Contract with New Jersey, will finish his OHL career with 152 total games played. He was primarily the starter for Plymouth the past two seasons averaging 61 games played. He will need to improve on his regular season play as he has had a sub .910 regular season save percentages in the OHL for the past two years.

In an ideal world the Devils are able to utilize Kinkaid/Wedgewood in the AHL and Clermont in the ECHL. That's ideal, but is it likely?

One player that hasn't been discussed yet is 2006 2nd round draft pick Jeff Frazee. After leaving college early Frazee has struggled to find consistency. He had a great rookie campaign (2008-09 he had 2.62 GAA and a .920 save percentage), but since then he has fought through injuries and inconsistent play. He's played 159 number of AHL games at this point (after playing 46 in three years of college) and if the Devils don't think of him as even a backup at the NHL level then it might be best to part ways with Frazee either via trade or allow him to look at opportunities overseas.

In order to get their two best goalie prospects adequate playing time, next year's AHL goalie tandem should be Kinkaid/Wedgewood. Of course another option might be to put Kinkaid on the fast-track and allow him to be the NHL backup next year. That's a dangerous game.

That's it for this week. Do you think that Kinkaid/Wedgewood/Clermont might be ready earlier than most other goalies? Do you think there is still a place for Frazee in the organization? Do any of the development paths in the chart above surprise you (hint: Jonathan Quick)? Thanks for reading and sound off below.