Stanley Cup Finals: Devils vs Kings- Beard or No Beard?

Share All sharing options for: Stanley Cup Finals: Devils vs Kings- Beard or No Beard?

The New Jersey Devils are playing hockey after Memorial Day! It's a great feeling when it's 85 degrees out and the hockey club you root for is still lacing up the skates. When this time of the year comes, the players on both teams have their ways set and superstitions run rampant. Players eat at the same restaurant, drive the same route, talk to their equipment, listen to the same pre-game music. Even the fans get into it. On my Twitter feed recently, I've seen a lot of comments on superstitions now that the Devils have made it into the Stanley Cup Finals against the Los Angeles Kings.

Since neither captain touched their respective conference trophy, the Hockey Gods must determine who will win on another factor. My guess is that it lies in the player's playoff beards.

Disclaimer: At this point in the season, we all know deep down their is a higher power that guides each team to their destiny, right?! Read on after the jump!

Let's start with some metrics for who has the best beard. A good beard has two characteristics:

1. All around growth from the neck, to the cheek, to the mustache. (Nothing Trimmed)

2. Thick, full growth, nothing that grizzly adams wouldn't see as a challenge to his own beard. Keep in mind, this is to impress the Hockey Gods, not the ladies.

Let's start with the coaches: 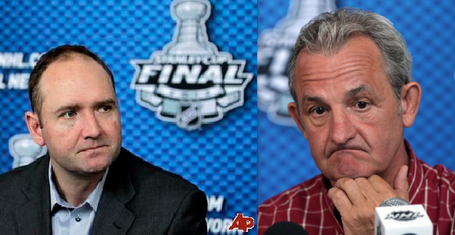 As you can see, neither coach has much of a beard, but that's to be expected.

Next up is the two captains as they received their respective conference trophys. 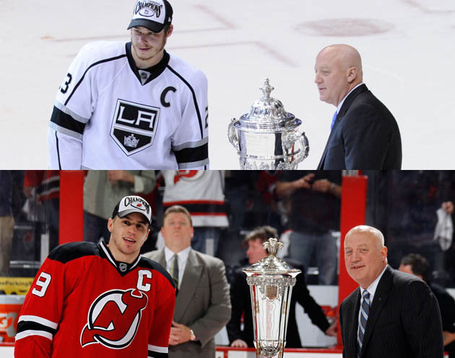 Dustin Brown has a scraggly, teenager looking beard. Zach Parise had a more adult look, but not much of a beard.

Next up, the starting goaltenders: 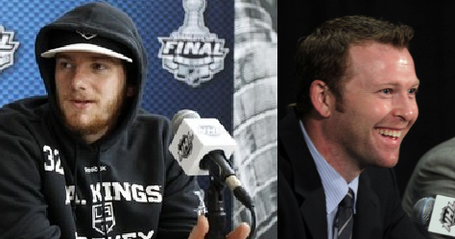 This is the most interesting comparison to me. Martin Brodeur is the veteran who has been in the Stanley Cup Finals multiple times before, while Jonathan Quick is a first timer who is barely into his twenties.

Brodeur: 1 (Brodeur gets a point for being awesome, not for his lack of a beard)

How about comparing the two rookies who are making an impact in the playoffs for their teams. 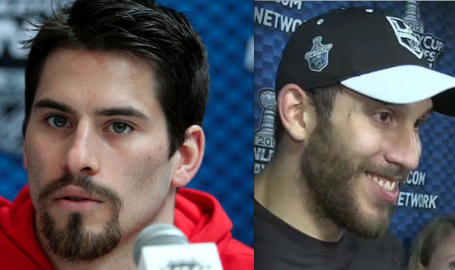 Adam Henrique vs. Dwight King. Henrique trimmed up the beard for a nice goatee look while King has pretty full bodied growth, but it's fairly short.

Next up, two high scoring alternative captains, one being a game one hero, the other being a world class bum in game one, I'm looking at you Ilya Kovalchuk. 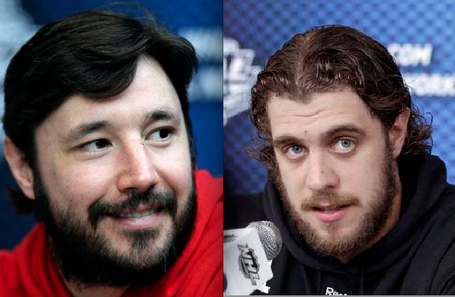 Anze Kopitar has a scraggly beard that isn't growing in on the face, while Kovy has a thicker, darker beard.

Two guys that no one likes, Mike Richards and Jeff Carter. I.E. the "Flyers West" duo. 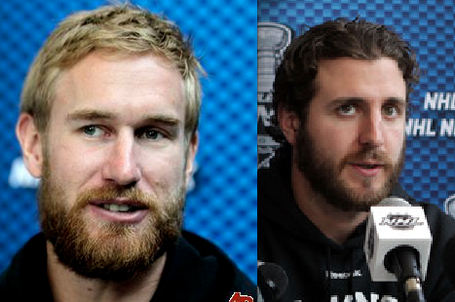 Carter is on the left and Richards is on the right.

Carter: 9 (pulling off a thick looking beard with blonde hair is a tall order)

Now, the two Z's on the Devils, Dainius Zubrus and Travis Zajac. 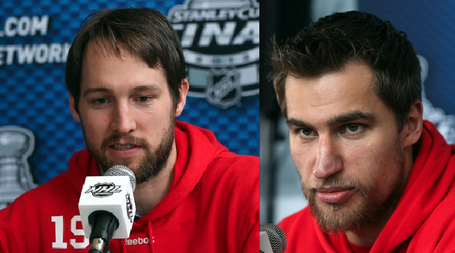 Finally, I'll include the beard I think is the most impressive, Andy Greene's beard. A solid 9.5. Pictured right is Mitchell, who gets an honorable 7. 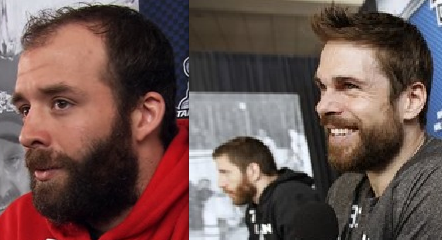 Did I miss any beards that you think are great beards? If so, feel free to post in the thread below. I hope this fun post lightens the mood after the heartbreaker of a game last night. Let's continue to support the Devils and Swarm It Up!