Share All sharing options for: 2012 Eastern Conference Finals: Devils vs. Rangers Fenwick Over Time - Games 1 and 2

The series is tied - each team has had their ups and downs through the first 120 minutes. The next one is important. The Devils have home ice right now and they are 4-1 at The Rock in the playoffs. In Game 1 the Devils finished minus-4 in Fenwick (Corsi +7). John noted in the recap that the Devils were +5 in Fenwick after two periods.The Rangers blocked 21 shots that game as well. In Game 2 the Devils dominated with a +13 Fenwick (Corsi +22).

A little over a month ago, Arctic Ice Hockey posted the playoff stats links from www.behindthenet.ca. One of the links provided was a Fenwick (shots on goal and missed shots) line for each team over 60 minutes. It also shows when goals occur with the indication of a vertical line. You can see trends for instance shooting droughts and increased possession with the puck as the game goes along. What can these graphs tell us about the first two games and when can we expect tomorrow? 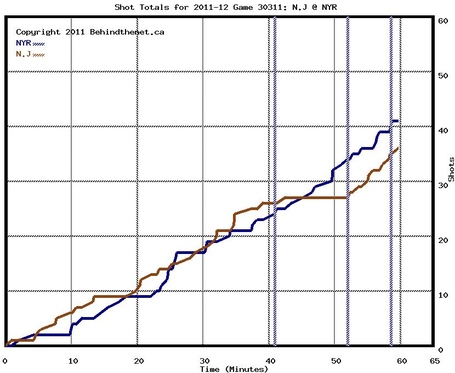 The Devils quickly got shots attempts off to begin the series and took a 9-4 lead in Fenwick T around the 12 minute mark. The Rangers gradually increased their total as the Devils hit a 6 minute drought. The Devils finished the period strong to take a slight lead in Fenwick. The Devils started hot off the gate again in which the Rangers responded with a big powerplay when Dainius Zubrus took a hooking penalty at 2:54 into 2nd period (23rd minute on graph). The Rangers were positive in Fenwick for only a short period of time as both teams traded shots. The Devils finished strong to end the 2nd period.

The 3rd period saw not a Rangers surge but a Devils team that didn't get at the puck at Henrik Lundvqist for 10 minutes. The graph sees a gradual increase - a linear line would fit well for the Rangers in the game. The Devils have that gap in the 3rd period in which a goal against produced it and a goal finished it. Credit the Rangers defense for blocking shots. The Devils were happy with the first 40 minutes of play that game and that makes sense. 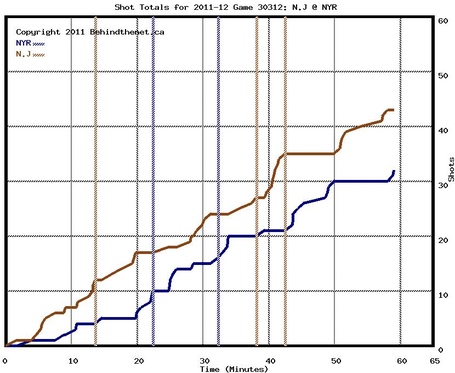 This game saw a slow start then a Devils surge. Their increased puck possession and strong forecheck produced a powerplay in which Ilya Kovalchuk's wrist shot plunked off the post and in. After a strong 20 minutes, the Rangers had a better performance, taking a 2-1 lead and shortening the gap on Fenwick attempts. The Devils finished strong yet again to tie things up. The Devils started the 3rd off great, getting the go ahead goal by David Clarkson. Yet another long shooting drought in the 3rd period followed. The Rangers took advantage but no goal was produced. The Rangers, only down a goal finish generated just 2 attempts during the last 10 minutes of the game.

The one trend I would like to see go away from the Devils is this middle of the 3rd period scoring drought. Both games game an increased period of time with no Fenwick attempts. In Game 1, it was after a Rangers goal. In Game 2, it was after Clarkson's goal. The Devils will have to grind the game down and do a lot of work to generate shots and then goals. If this is fatigue, they have to fight through it. If it's a Rangers surge, they have to respond (which they did late in Game 2 - playing a bit more aggressive).

After both Ranger goals in Game 2, the Devils did not do a well enough job responding either. Things seem to take a little time before settling down before the Devils pick it up again. Addressing this can put the Rangers on their heels. It can produce an ill-advised penalty or odd-man rush.

The one thing the Devils are doing is starting up periods with a lot of shots. The only two times they didn't (3rd period Game and 2nd period Game 2) the Rangers scored and actually took over the majority period. I would assume the Devils like to establish their system and their aggressiveness first to set the tone for the period. If the Devils start a period flat, they are in for some trouble.

What are your thoughts on the Fenwick over time graphs? What things do you see that may tell us things about Game 3 and beyond? Thanks for reading.