How They Were Built: Looking at the Conference Semi-finalists Playoff Rosters

Share All sharing options for: How They Were Built: Looking at the Conference Semi-finalists Playoff Rosters

At this point in the NHL playoffs it is interesting to look at each remaining team's development system/player acquisition methods. For example you have heard Pierre McGuire talk about how great the Devils scouts are for finding unsigned/undrafted free agents David Clarkson and Andy Greene. If you listen to New York area radio you would think Glen Sather ran the most extraordinary draft room ever because of legendary players like Ryan Callahan and Michael Del Zotto.

As we all anxiously await the start of Game 1 tonight I wanted to take a look at the makeup of each conference finalist's playoff roster to see how they were built. Have teams utilized their own scouting staffs or drafts to build their rosters or have they focused on leveraging assets in trades? After the jump we will look at the playoff rosters of the Phoenix Coyotes, Los Angeles Kings, New York Rangers and New Jersey Devils breaking down those rosters by how their players were acquired.

Below you will find each team's roster broken down by how the team acquired the players they are using during their current playoff run. Note that AFA stands for 'Amateur Free Agent' and PFA stands for 'Professional Free Agent'. The distinction is that an AFA is a guy, like David Clarkson or Andy Greene, signed after they completed their amateur career where a PFA is a player, like Brad Richards or Marian Gaborik, signed via unrestricted free agency period. Only players who have skated in the playoffs were considered. 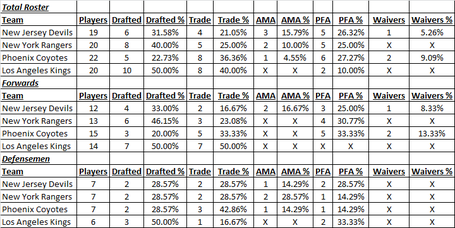 Also, for players like Ilya Kovalchuk or Travis Zajac who were out on the market as unrestricted or restricted free agents ,I assumed their initial acquisition to be how they were acquired. Meaning Zajac was acquired via draft, Kovalchuk via trade, etc.

I also broke down each team's acquisition method by forwards/defensemen. Goalies will be discussed in each team's recap below.

Phoenix Coyotes-If the Coyotes win the Stanley Cup I hope Hollywood makes a movie out of it. It's a real life Replacements/Major League/Mighty Ducks story. With limited resources and the franchise constantly wondering where it will be playing next season, GM Dave Maloney has put together a likeable (besides Raffi Torres, no one like Raffi Torres) team acquiring low-risk free agents (Mike Smith), making subtly good trades (Michael Rozival, Antoine Vermette) , hitting a home run or two in the draft (Keith Yandle) and having a coach in Dave Tippett who has the players buying into a very tight defensive system. He has also gotten bargains via the waiver wire (Gilbert Brule). There are not a lot of stars on that Phoenix roster, and that makes you appreciate the work of Maloney/Tippett in piecing that team together. As alluded to above, starter Mike Smith was acquired as an unrestricted free agent as was his backup Jason LaBarbera.

Los Angeles Kings-I checked twice. Not one forward the Kings are currently using in the playoffs was acquired via free agency. Not that they didn't try (Kovalchuk, Richards) to get the necessary pieces via free agency, Dean Lombardi just couldn't or wouldn't outbid other teams for the services of high profile FAs. Instead he has utilized his depth and future draft picks to acquire key players like Mike Richards and Jeff Carter. In total the Kings gave up Jack Johnson, Brayden Schenn, Wayne Simmonds, a future #1 pick and a #3 pick in 2012. The fact that they could give up those players and still have a solid roster made up primarily of drafted players is a testament to how well they have drafted over the years. The former Flyers duo, along with Anze Kopitar, Drew Doughty and Jonathan Quick will pose a formidable team for years. Speaking of draft success, both goalies for the Kings were acquired via the draft.

New York Rangers-The Rangers, much like the Kings, have benefitted from strong drafts that have allowed them to have many players on cost effective entry level contracts. This (along with violating the spirit of the CBA and sending Wade Redden to the AHL) allowed them to supplement those players with proven productive players like Brad Richards and Marian Gaborik via free agency. The one move that has really benefitted the Rangers was clearly trading Scott Gomez's horrendous cap hit AND getting a really good defenseman in the process. Ryan McDonough has played like a $4MM-$5MM player, and has been a key contributor for the Rangers. Vezina/Hart Trophy finalist Henrik Lundqvist was acquired via a 7th round pick in the 2000 draft and little used backup Marty Biron was a free agent signing.

New Jersey Devils-The Devils haven't had great success in picking up complementary players in the later rounds of the draft, but those players they have drafted, Parise, Elias, Henrique and Zajac have all been key offensive contributors in the regular season and now the playoffs. The Devils have also been able to add key players this year (Alexei Ponikarovsky, Marek Zidlicky) without subtracting anyone substantial from the active roster. The Devils goalies are a 1990 1st round pick and an unrestricted free agent.

Each of the teams that remain, have gotten where they currently are a bit differently. The Kings and Rangers have drafted well recently, which has kept them out of the riskier free agent pool and focused their attentions on the premium free agents or acquiring top players with organizational players/picks. The Devils have traded for or signed low risk high rewards players like Petr Sykora, Alexei Ponikarovsky and Marek Zidlicky who have helped get them where they are. The Coyotes have utilized every method imaginable and naviagated tough waters considering their ownership situation.

There is no standard blueprint for NHL playoff success. You can only draft well for so long before you have too many assets and not enough ice-time. With a salary cap you can only make so many mistakes with free agency. Trades are tricky, especially in mid-season, as players need time to adjust to their new system and teammates.

Does the makeup of any of the remaining rosters surprise you? What is your ideal building method? Are the Kings the perfect balance of draft success and asset utilization? Thanks for reading and sound off below.