Crushing It: The New Jersey Devils & Even Strength Possession in the 2012 Playoffs

Share All sharing options for: Crushing It: The New Jersey Devils & Even Strength Possession in the 2012 Playoffs

One of the key points you should see and hear about the New Jersey Devils is their even strength play. The Devils pounded the Philadelphia Flyers in four straight to eliminate them in five games. The Devils stood out in 5-on-5 against the Florida Panthers, as the Florida really hung in the series because their power play got hot (9-for-27). No matter who they will play in the Eastern Conference Finals, the Devils will definitely have an edge because they've been so strong at even strength. Even if you're not familiar with stats like Corsi or Fenwick, just seeing the Devils hold opponents to so few shots on net in periods and absolutely swarming them in their own end at times would be enough to confirm who's been better in the most common situation in hockey.

Of course, the stats help quantify the Devils' strength. The Devils weren't a bad team at all when it came to possession in the regular season. In close-score team Fenwick%, the Devils finished tenth in the NHL at 51.08% according to Behind the Net. That's pretty good. However, the Devils upped their game in the playoffs. While the population size is smaller; the Devils have posted the third best close-score team Fenwick% at 56.21% - the highest among all active playoff teams. LA is the closest team and they're not really close since they're about 51%. If you look at the other situations, you'll see the Devils have been well above 50% in all score situations except when they're up by one. Even there, 47% with a lead is quite good; only four teams have done better in this postseason - and the only active one is New York. In short: the Devils have been crushing it in terms of possession at evens.

It's been enough that user zoobroken had the following request in the comments to Matt Evans' recent post about the team's performance in the playoffs:

Do you think it would be interesting / possible to compare Corsi for each line by series? I wonder if we have enough data now to spot any meaningful trends. It definitely seemed to me that the third line was giving up more shots that I’m used to seeing in the last few games.

Remarkably, breaking it down by player and sort-of organizing it by line and pairing is even more impressive than the team's performance. Please continue on after the jump to see how the players did in each series at even strength in terms of possession.

All of the following numbers came from the excellent Corsi charts from Time on Ice. Here's an example of one of them, game 4 against the Flyers. It's my favorite one so far this postseason. In any case, the script Vic Ferrari wrote counts all goals, shots on net, missed shots, and blocked shots both for and against that player when they're on the ice in a 5-on-5, non-empty net situation. Corsi is the summation of all of these numbers for and against; the higher the number, the better. Fenwick is the summation of all of these numbers except for blocked shots. Like Corsi, higher is better. I refer to both stats as puck possession since it's the best way we can approximate possession; the underlying assumption is that an attempt on net means the puck is in the other team's end of the rink - somewhere the Devils have been a lot this season. Lastly, I am aware the population size is small (seven and five games), but I think you'll agree that the Devils have been crushing it when you see these numbers.

Here's the summation of all seven games from the Florida series. 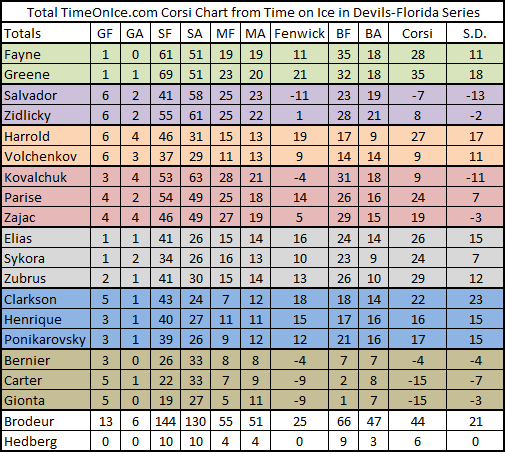 A few observations from this chart:

If you thought that was good, then here's the summation of all five games against Philadelphia: 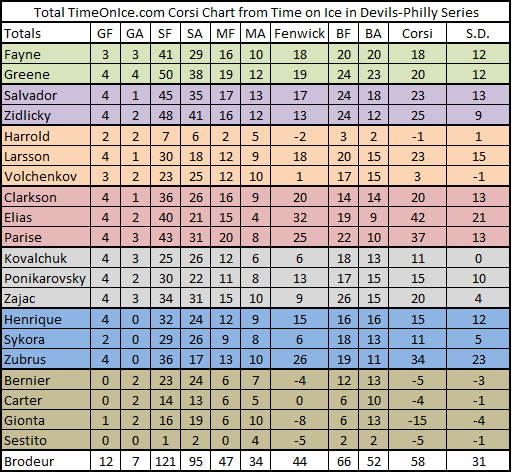 Overall, there can't be too many complaints about the Devils driving the play at evens. Going into their next series, it'll be important that the Devils try and keep this up. I think their Corsi numbers will be fine given that either opponent has been hyped up to block a lot of shots. To that end, I'm hoping that the Devils can swarm the goaltender with shots on net and continue their excellent defense. If they can keep that up and not suffer elsewhere (e.g. the penalty kill, bad goaltending moments, etc.), then they got a good chance as any regardless of who they'll play in the Eastern Conference Finals. As Mike Babcock famously said, possession is everything and right now, the Devils have been crushing it in possession in the 2012 NHL Stanley Cup Playoffs.

What do you make of these numbers? Are you more or less impressed in a particular Devil or unit after seeing these numbers? Do you think DeBoer should keep the same lines from the Philadelphia series? Can the Devils keep this up in the Eastern Conference Finals regardless of who they'll play? Please leave your answers and other thoughts about the Devils' possession performance at evens in the comments.

Thanks to zoobroken for the request that led to this post; thanks to Vic Ferrari at Time on Ice for having the scripts for the Corsi charts available and running all season through the playoffs; thanks always goes to Gabe Desjardens of Behind the Net; and thank you for reading.