Its prospect update time and below you will find statistical updates for Devils prospects playing in the AHL, ECHL, CHL and NCAA. I also look back at my season preview for the Devils forwards and see how their even-strength scoring matched up against my predictions. There are also other news and notes after the jump. 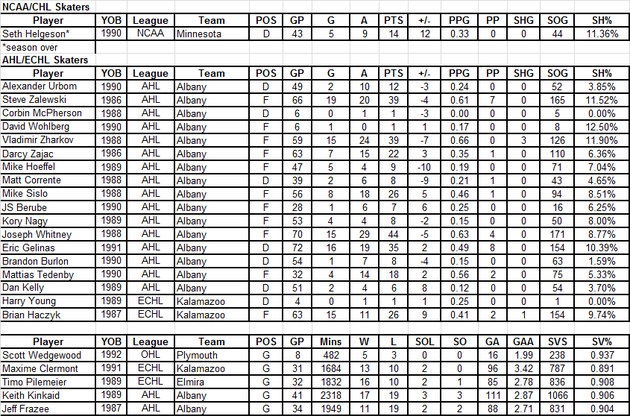 Back in September I previewed the New Jersey Devils forwards and how I expected them to perform this season. My big concern was the even-strength scoring by forwards that had dropped off so much in 2010-11 when they had a 137 even-strength goals (122 by forwards), which was last in the league. Assuming a healthy Zach Parise and improvement by young forwards Mattias Tedenby, Nick Palmieri and Jacob Josefson I hoped that this number could drastically improve. Below is the projected scoring for each forward, that I put together in the early fall. 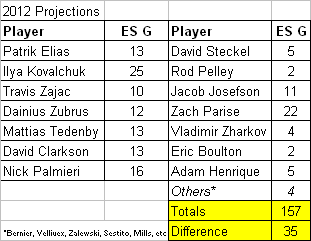 The first thing you will notice is that all the names above didn't get to contribute a lot on the ice this year. David Steckel was traded before camp ended, Nick Palmieri was demoted after poor play, Mattias Tedenby quickly followed, and Vladimir Zharkov barely had time for a cup of coffee in the NHL. Additionally, Travis Zajac's recovery from achilles surgery took longer than expected.

The projections above for the Devils 'big 3' of Ilya Kovalchuk, Zach Parise and Patrik Elias were mostly on point. In total I was only off by 1 goal, as I projected they would score 60 even-strength goals and they scored 61. The 'youth movement' I hoped for was not meant to be. Tedenby, Palmieri and Josefson (though in Josefson's case it was due to injury) did not produce as I had hoped scoring only 7 goals when I had them projected to score 40.

Thank the heavens for Petr Sykora, Adam Henrique and David Clarkson. They took up the scoring that we were expecting from Tedenby, Josefson and Palmieri. Clarkson scored 22 even-strength goals, Henrique had 12 and Petr Sykora (who when I wrote the preview back in September was a longshot to make the roster) scored 17. If not for them, this year might have seen the Devils back in a lottery position.

Also, for those curious, the Devils were 18th in the league in total even-strength goals, so they improved from last to the middle of the pack. Note that 5 of the teams ahead of the Devils did not even make the playoffs, so while they were able to score more than New Jersey, they weren't better at keeping the puck out of their own net.

Helgeson's Season Ends: Despite a loss to Boston College in the Frozen Four semifinals, Devils defensive prospect Seth Helgeson had a solid season. There is a really good interview with him by DJ Powers of Hockey's Future that discusses his season, college development and future. You can read that here.

Wedgewood Continues On: In the quarterfinals of the OHL playoffs Scott Wedgewood's Plymouth Whalers are tied 1-1 in their matchup against the Kitchener Rangers. Through 8 playoff games Wedgewood has a .937 save percentage and a 1.99 goals against average. That's pretty darn good.

Kalamazoo Up 3-1. The K-Wings are up 3-1 in their ECHL quarterfinal series against Wheeling. Maxime Clermont has yet to see action in the series and the only skater to be currently playing is defenseman Harry Young. Brian Haczyk is still technically on the Albany roster and will likely be returned to Kalamazoo after the AHL season ends.

Draft Rankings Have Been Released: Over at NHL.com they have released the Central Scouting Services Final Rankings for the 2012 NHL draft. We'll be on top of prospect previews in a few weeks, but if you have anyone that you feel we should profile, list him in the comments below.

Stick A Fork in Albany: After three straight losses this week, the Albany season is all but over. Mathematically they are still alive but being 6 points out with only 3 games left to play, they need a miracle to sneak into the playoffs.