Share All sharing options for: How the New Jersey Devils Fared Against the Southeast Division in 2011-12

Since Philly beat Buffalo last night, the New Jersey Devils have sole ownership of the sixth seed in the Eastern Conference. The Devils cannot mathematically catch the Flyers in the standings, so they will play the winner of the Southeast Division in the first round of the 2012 Stanley Cup Playoffs. As of this writing, it's still up in the air as to who that will be. It could either be the Florida Panthers or the Washington Capitals.

Will those results tell us much about what will happen in the playoffs? Not exactly. The four games the Devils played against either Florida or Washington were spread apart throughout the season. The games had both teams in different situations in their seasons at the time then they are now. Still, those games against the Panthers or Capitals should give us a little reason to feel confident about the Devils' chances in the first round based how they did. We at least know the Devils can beat those teams.

In any case, I went through the game-by-game stats at NHL.com and organized the Devils' results against Southeast Division teams. I also included the team Corsi and Fenwick numbers from Time on Ice for each game to provide a different look at how the Devils did in each game. Here's an example from one of those games. I also compiled the results for various situations such as home-and-away games, games the Devils won or lost, and by opponent. While I wouldn't put a ton of faith into these results carrying over into April, especially since three of these teams didn't make the playoffs, it's still interesting to see how they performed. The results come after the jump.

Here are the splits against the Southeast Division. If you want to see a game-by-game list, then please click on this link to view that entire chart. 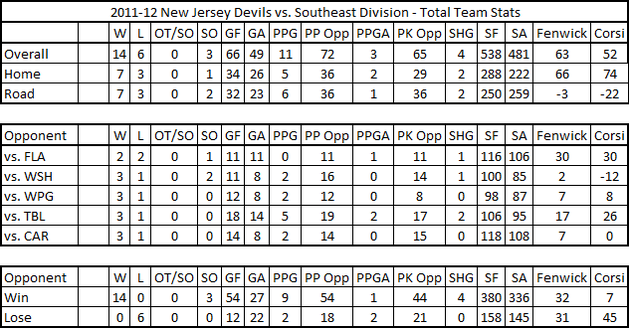 Interestingly, the Devils split their record evenly across home and away games. At home, they've just dominated in shooting attempts. They've collectively out-shot their opponents by 66, they've only went to one shootout (and won), and out-scored opponents by eight. On the road, they've been out-attempted by a considerable amount, collectively out-shot by nine, and still out-score opponents by nine. I can understand the Devils getting out-shot and out-attempted on the road to some degree since they don't have the last change and if they take a lead, then it's expected to be out-done in both stats. To still out-score them and go 7-3 is quite good. The two shootout wins helped, I'm sure.

The Devils haven't swept any single Southeast Division team, they've just been distinctively the better team except for the Panthers. They've collectively out-shot all five teams in the division and only the Panthers can claim that they weren't out-scored. The Panthers can also claim special teams success as they haven't allowed a power play goal by the Devils and scored one of the few power play goals against New Jersey among Southeast teams. At least the Devils can claim possession dominance over the Panthers. Only in the four games against Washington did the Devils collectively get out-attempted; but even there, the Devils finished ahead in collective Fenwick. Still, looking at these splits, it doesn't appear that Florida is all that easy of a match-up. They're easier than Pittsburgh or Boston, of course. But these collective results, as small as a population of four games may be, put a little doubt in my mind as far as whether Florida's an easier match-up than Washington. Not a lot, but a little.

Incidentally, the Devils really did an offensive number on the Tampa Bay Lightning. The Devils didn't out-shoot them by much, but they were superior in attempts. The Devils also piled up the goals against them on special teams with five power play goals and two shorthanded goals. That may partially explain the shot differential not being so large; pucks just went in at a higher rate. The Winnipeg Jets were the stingiest in terms of shots in their games against New Jersey. Unfortunately for them, the Devils were even stingier in goals and shots. The games against the Carolina Hurricanes were more open, but the results were the same: only eight goals against the Devils; out-shot, out-attempted (though Corsi was even for the Canes, Fenwick was positive for NJ), and out-scored. What's interesting about them is that they got the most power plays against the Devils among Southeast teams and converted on none of them.

In terms of wins and losses, the Devils have actually been on the positive side of possession in both wins and losses. I expected to see positive numbers for losses since losing teams are chasing the game and should be making more attempts on net. However, to see the Devils collectively ahead in Fenwick and Corsi in their wins speaks to how well the Devils have played in some of those wins. They crushed their opponents in shot differential when they won, and collectively have a better Fenwick value than in losses. Impressive. The Devils did have several decisive wins over Southeast teams, which I'm sure drives those stats so high. Lastly, the 14 wins were only boosted by three shootouts. It helped - every point does - but the Devils weren't solely reliant on the shootout to get most of their wins.

The big caveat for all of this is the small population size of four games and the fact that those four games came at different points of the season. While we can get a general idea of what each team is all about from those four games and whether the Devils struggled or not, I wouldn't jump to the tempting conclusion that the Devils would wail on the Caps or Panthers in the first round. I would conclude that the Devils really did enjoy their time against this division. Their offense got going against Tampa Bay with at least three goals scored per game. The Canes didn't have New Jersey's number in this season. The Caps may not be as threatening as they appear to be on paper. The Panthers gave the Devils the most problems and arguably did the best against them except when it came to attempts. Incidentally, that's their most likely opponent in the first round.