Its prospect update time and below you will find statistical updates for Devils prospects playing in the AHL, ECHL, CHL and NCAA. I also have some other news and notes after the jump. 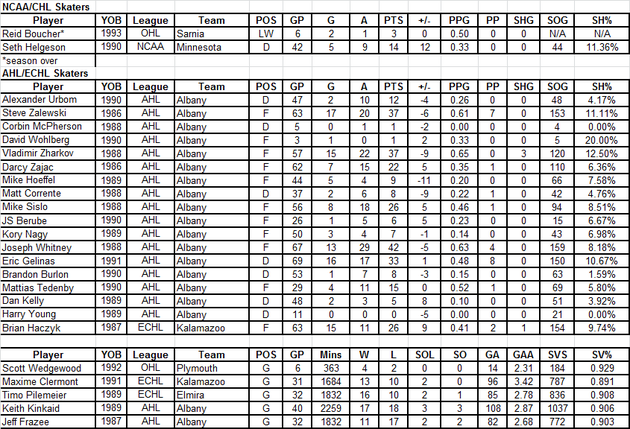 (Note that for OHL players (Wedgewood, Boucher) the numbers above represent their playoff statistics.)

ECHL Playoffs Begin: Starting this week, the ECHL playoffs kick off and Maxime Clermont, who just returned from an injury, will try to help the Kalamazoo Wings in their opening round series vs. the Wheeling Nailers. Kalamazoo is currently the 3rd seed in the Eastern Conference. Clermont, will likely find himself as the backup for the series, but remember that he started last year's QMJHL playoffs as the backup and had a fantastic run in the playoffs that almost led his team past the heavily favored Saint John Sea Dogs. If he can raise the level of his game again, he can be a factor for the WIngs.

Wolhberg Signs ELC: Noticed by many on Capgeek.com and then reported by the Devils themselves, David Wohlberg has signed an entry level contract with the team, which starts next season. The contract is a two-way deal and would have a $600,000 cap hit/NHL salary.

Now that Wohlberg has inked his contract....What about Corbin McPherson? Per the CBA the Devils have until August 15th to sign McPherson to an ELC otherwise he would become a free agent. I fully expect something to be completed sooner rather than later, but I hope the Devils don't wait too long. Two years ago, it seems the Devils let Mark Fayne become a free agent as they signed him to a contract almost a week past the 8/15 date. (Note that I am aware that the Devils may have already signed him and just reported it late, that's certainly a possibility) Imagine if another team had been looking at him back then?

College Free Agents: After the first two rounds of the Frozen Four, many teams were elimanted from contention, ending their season. Thus, a small frenzy of activity took place last week. Two of the big names that have chosen homes are; Forward JT Brown from the University of Minnesota-Duluth signed with the Tampa Bay Lightning and forward Spencer Abbott from the University of Maine signed with the Toronto Maple Leafs. If you are interested in seeing which college players are signing pro contracts and which teams they are going to, check out this link at CollegeHockeyInc.com.

CHL/NCAA Player Update: The highly talented Sarnia Sting was knowcked out of the OHL playoffs, losing their opening round series four games to two to the Saginaw Spirit. This means Reid Boucher's first professional hockey season comes to a close. Boucher ended the year with 28 goals in 67 games and will head back to Sarnia again next season.

Seth Helgeson's Minnesota Golden Gophers had a bye last week as they prepare for Thursday night's Frozen Four matchup against Boston College. The game is scheduled to start at 8pm and right now it looks like it will be on ESPN2.

Albany Is Hanging On For A Playoff Spot....Barely: After a week where they went 2-1, Albany finds itself in 12th place in the Eastern Conference. Being five points out with six games to go is a tough task, and jumping four teams to make it happen makes that task nearly impossible.

Check out the 'Playoff Primer' page on the AHL website for more information.