Last week Union College center Kelly Zajac signed an ATO (Amateur Try Out) contract with the Albany Devils of the AHL. Kelly as most of us are aware, is the brother of current New Jersey Devils Travis Zajac and current Albany Devil Darcy Zajac. But he's not just 'another Zajac'. Kelly had a very good college career in the ECAC and helped lead his Union team to the Frozen Four this year. The smallest of the professional Zajac clan (listed at 5'11") Kelly is a playmaking center who averaged almost .80 assists per game in his last two years at Union. He's not just offense though. Kelly was named the ECAC defensive forward of the year. His accomplishments during his senior year also got him named to the ECAC third team. During his junior year he was named to the ECAC second team.

Normally I wouldn't write up a post about a player who only signed an ATO with Albany, but Kelly Zajac is a little different. First, he's a Zajac. Second, I fully expect him to sign an entry level contract with the Devils during the summer and start next year with Albany, likely playing on one of their top two lines.

In order to get some additional information on Kelly for our readers I enlisted some expert help. I contacted Ken Schott of the Daily Gazette. (If you recall when the Devils signed Keith Kinkaid last year, Ken was a big help in giving us information on him).

After the jump we have a Q&A with Ken, I reference some comments Travis Zajac made about Kelly as well as other news and notes on Devils prospects.

Note that the below stats leave out one very important item: Faceoff Percentage. Per the Union website, Kelly won faceoffs at a 56.8% rate last year.
Tom Stivali: Ken-Thank you for taking the time to do this. Just based on stats, Kelly Zajac seems like a first line player. How else was he used? Did he see time extensively on the PP and PK?

Ken Schott: Thanks for having me Tom. Seems likes this is becoming an annual event, given that the Devils signed Union goalie Keith Kinkaid last April. Kelly was used extensively on the power play and the penalty kill, and, in talking with Albany Devils coach Rick Kowalsky on Tuesday, Kelly will see some time on the PK as the Devils wrap up their season with three games in three days. Kelly is a very strong defensive player, especially on the PK. It's one of the reasons he won the ECAC Hockey Defensive Forward Award.

Tom: One thing the Albany Devils currently lack is a playmaker that can set the table for others. Judging by Kelly's increasing assist total over his college career he has the ability to find the open player. How have you seen this skill develop over his time at Union?

Ken: He's a true playmaker. He is always looking to set a teammate up. I have seen his skills get better and better. He has great vision.

Tom: After two solid seasons it seems he elevated his play in junior year with 42 points in 40 games. Was his increased production due to better linemates? Was he just a bit older than the competition in the ECAC?

Ken: He found a chemistry with left winger Matt Hatch and right winger Wayne Simpson this season, and with Simpson and left winger Adam Presiznkuk the previous season. The age has something to do with it, but I also think that his hockey genes played a major role. And he has been a clutch player, scoring nine game-winners. I remember his first career game-winner. He scored it with two-tenths of a second left in regulation against Army Nov. 28, 2008, to give Union a 5-4 win. He came out of the right-wing corner and put the puck in before the buzzer.

Tom: Kelly was named the ECAC's top defensive forward last season. Defensive responsibility and two-way play is a pre-requisite for any Devils player. What was it about Zajac's defensive play that stood out to the voters?

Ken: His ability to use his stick to knock pucks off away from the opposition. He isn't afraid to block shots, and he gets into the corners to help dig pucks out.

Ken: I hadn't heard what other teams. I did see Travis quoted on Rich Chere's blog that there were some other teams, but he didn't mention them.
In addition to Ken's scouting report, we can also look to a Rich Chere post from the last week that has a few quotes from older brother Travis to get a sense of the type of player Kelly is:

"We’re all a little different," Travis said of the four brothers. Kelly is "a pass-first guy, a little smaller and a little shiftier. He's good good vision. He's responsible defensively and pretty shifty offensively. He's got some good hands and can make some plays. He’s a two-way player who definitely fits our team.

I'm looking forward to Kelly's play in Albany next year. He's already showed his defensive skills over the weekend, per Bill Cain of the Daily Gazette:

With about 3:45 left to play, the Albany Devils led Providence, 4-2. Goalie Jeff Frazee made a save near the post, but the rebound bounced to Maxime Sauve near the top of the crease.

Frazee was unable to get back into position before Sauve was flipping the puck over his pad toward what looked like an open net.

Then Kelly Zajac came into the play, sliding in and smacking the puck out of mid-air to preserve the two-goal lead.

Albany Misses Postseason: It was pretty much a foregone conclusion, but Albany was officially eliminated from AHL playoff contention during the middle of last week. I will be posting a longer Albany writeup in the future, but even though you can point to some tough obstacles the team faced (playing white-hot Norfolk so much down the stretch, injury to key veterans) Albany just wasn't good enough to crack the top 8 in the AHL's Eastern Conference. All you have to do is take a look at the team statisics and see the lack of offensive firepower the team had. Their 190 goals for was 27th in the AHL.

Call Ups to the NHL? Now that the Albany season has ended, I wonder if there will be anyone recalled to the NHL squad. Possibilities include Matt Taormina and Alexander Urbom on defense along with Vladimir Zharkov, Steve Zalewski and Mattias Tedenby up front. My personal preference would be a Stephen Gionta/Vladimir Zharkov swap on the NHL club's fourth line.

Clermont Moved Up: After Keith Kinkaid suffered a lower body injury in Albany's loss on Saturday, Maxime Clermont was recalled from Kalamazoo of the ECHL. Clermont was backing up starter Riley GIll at Kalamazoo and had not played in a few weeks, so it was good for him to get another opportunity in net. I would expect him to head back down to the ECHL with the Albany season over and Kalamazoo looking like it's going to progress to the Conference Final round of the ECHL playoffs. The ECHL playoff bracket is available for viewing here.

Boucher With A Strong Debut: Forward Reid Boucher, signed to an ATO by Albany for the last weekend of the season, got into a game on Sunday and recorded 4 shots on net. Impressive debut for the young Boucher. It would be my preference for him to play next year in the AHL as opposed to the OHL and I hope the Devils look to bring him along on a faster track.

And Then There Was One: Besides the players in the ECHL (Clermont, Harry Young, Brian Haczyk, Timo Pielmeier) the only other Devils prospect still active right now is goaltender Scott Wedgewood. Wedgewood's Plymouth Whalers are locked into a tough battle in the OHL semifinal round with the Kitchener Rangers. The series is slated for a 7th game on Tuesday night. Wedgewood has put up a .935 save percentage and a 2.16 goals against average in 12 playoff games.

And finally, here are the statistics: 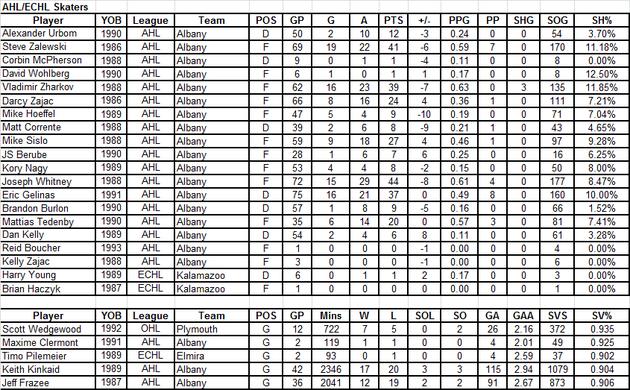 That's it for this week. Once again, I want to thank Ken for his time and insight into Kelly Zajac.

Thoughts on Kelly Zajac? Would you like to see Reid Boucher in the AHL next year? Anyone from Albany you would like to see called up for practices/to play in the playoffs? Please leave any prospect related questions, comments, etc below! Thanks for reading.