Do the New Jersey Devils Really Struggle with Backup Goaltenders or Afternoon Games?

Share All sharing options for: Do the New Jersey Devils Really Struggle with Backup Goaltenders or Afternoon Games?

I've been a New Jersey Devils fan ever since I was 10. If I had a dollar for every time I heard the phrase or similar variations of "The Devils always make back-up goaltenders look like Vezina candidates," then I would have exceptionally large pile of money. Not enough to fill a Scrooge McDuckian Money Bin, but at least enough to fill a large tub. It's such a common cliche among the Devils fan base. To take it at their word, it's as if the Devils have a magical franchise skill to turn an unheralded non-starting goaltender into the second coming of Dominik Hasek.

A less popular but still not unfamiliar phrase has to do with the team in matinee games. The main thesis is that the Devils simply struggle in afternoon games for one reason or another. They don't wake up. They don't show up. They show up too late. That sort of thing. It's not as rife as what I've heard about back-up goaltenders, but the anecdotes stick in your head over the years.

I've got both on the mind recently since the Devils were hit with a double-whammy of both issues coming up on this past Sunday in a 1-0 loss. The Devils had a 3 PM EDT game where they struggled against the New York Islanders to even challenge them in the first two periods. The third period saw some improvement, but by the end of the game, the Devils were shutout by Anders Nilsson. Nilsson is a recent AHL call-up because the Islanders' usual back-up goaltender, Al Montoya, was injured. He is 21 and has played only 44 minutes of NHL hockey prior to Sunday's game. He got a shutout in his first ever win in the NHL on a Sunday afternoon in March. Those fans who espouse either or both of the prior statements I described appear to have a legitimate point.

However, I think that's just one game. I'm not denying the result; but I am skeptical on both statements. Do the Devils truly struggle more against back-up goaltenders as opposed to starters? Are the Devils really a poor team in afternoon games? I think we can get some answers to these questions by looking at this season. The 2011-12 Devils have had their fair share of afternoon games and games against the other team's non-starting goaltender. After perusing NHL.com and Time on Ice, I've put together some basic stats of both situations to see whether these statements actually mean something, or whether it's driven by confirmation bias more than anything else.

I've defined an afternoon game as any game that started before 5 PM EST/EDT. Tom Gulitti has already pointed out that the Devils are 6-6 in afternoon games this season. Here's the basic stats from those twelve games.

Twelve games out of 66 isn't a very representative population. I wouldn't use this to make sweeping conclusions about the Devils as a whole. That said, amid this small subsection of the season so far, the Devils have run the gamut in afternoon games from decisive losses to decisive wins. They've shutout the Islanders once and recently just got shutout by the Islanders. They've had games where they were very positive in Corsi and Fenwick (and lost the four where they got above +5 in both categories), and they've had games where they were creamed in that regard (both sub -5 performances led to wins). They've scored 29 goals, allowed 27, took 311 shots on net, and allowed 304 shots. I'd say the Devils are about average in the afternoon. I leave it to you to determine whether that constitutes a constant struggle.

Even if you still don't like how the team played in the prior 12 afternoon games, I wouldn't fret. The Devils only have two more remaining this season: 3/17 against Pittsburgh and 4/7 against Ottawa to close out the regular season. Two games will not kill the Devils' season. Especially if current trends hold, they'll just split them.

The Games Against Backup Goaltenders

The Devils have played more games against backup goaltenders than they have before 5 PM EDT this season. While teams have increased the use of their #2 (or #3) goalie in recent years, almost every opponent the Devils have played has had one goaltender start more games than another. I used games started to determine whether the Devils played against a team's usual starter or a backup for each opponent. The lone exception was Toronto, where Jonas Gustavsson has more starts only because James Reimer has suffered from injuries this season and is only catching up now. 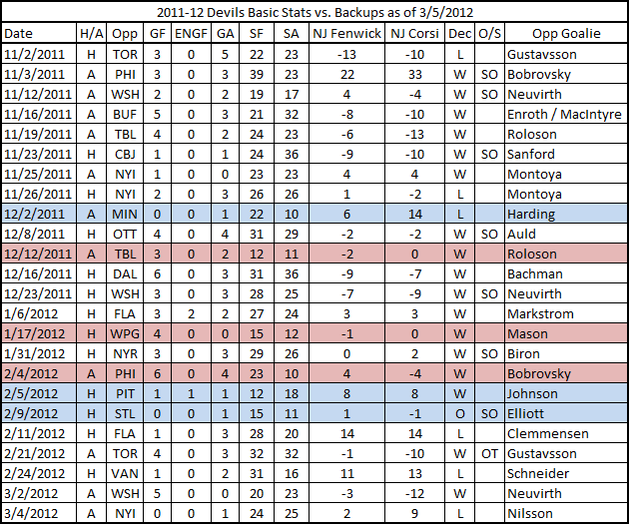 The Devils have had 24 games where they played against a backup goaltender. In three of them, the backup started the game but the Devils scored enough goals against them to have the backup pulled for a starting goaltender. Those games are highlighted in a light red. In three other games, the opposition's usual starting goaltender started the game but was yanked for the backup partially through the game. Those games are highlighted in blue. There was a seventh game where the Devils forced a goaltender change, but since the change went from Jonas Enroth to third-stringer Drew McIntyre, I just counted the whole game as against a backup of some kind.

The totals in this chart are quite nice. The Devils have scored a total of 67 non-empty net goals, allowed 52, took 578 shots, and allowed 531 shots. New Jersey has went 17-6-1 in games where the opposition's backup goaltender played all or part of the game. That's a rather positive record. Even if you take out shootouts, where the Devils have went 6-1 against backups, the Devils still have a record of 11-5. That's still a positive winning percentage for the Devils.

Yes, the Devils got shutout by Anders Nilsson and in relief appearances by Josh Harding and Brian Elliott. The Devils also lit up Sergei Bobrovsky, Richard Bachman, Alex Auld, Michal Neuvirth, Jonas Gustavsson, Dwayne Roloson, Chris Mason, and Enroth. Simply put, the Devils have had more successes than failures in scoring against backup goalies this season.

The population sizes for each situation are pretty small, even in a season that's only 65 games old for the Devils. I wouldn't use either to make large sweeping conclusions about how the team really does perform. For that, you'd have to look at the games more closely and filter out more meaningful numbers than just the basics I've provided.

That caveat aside, the purpose of this post was to take two common thoughts among Devils fans and see if they really hold any water. It's questionable in the case of afternoon games. 6-6 isn't a bad record, but it could be better. That it's only 12 games makes me hesitant to say the Devils are struggling because of the game's time when it could very well be coincidence. At least the backup goaltender theory looks like a definite no for this season, even involving only 24 games out of 65.

So why do we recall the bad afternoon games or the games where the other team's back-up has a great night for some reason or another? Namely because they stick out in our minds. Some fans are just negative in general and so poor performances are more easily remembered than good performances. We don't expect a backup goaltender to step in and be awesome 60 minutes, so when it happens, it's somewhat memorable (and frustrating). We don't expect the Devils to drop some of the games they do, and if it's in the afternoon, then maybe that gets more attention than the wins.

It's all confirmation bias, selectively choosing memories and facts to fit what we believe to be true. That's never really going to go away as it's a part of human nature. However, what we can do, as fans, is dig deeper into the phrases we hear or even state to others and determine if they're really true or not. While I haven't gone into the Devils history, we can at least stop saying things like "Backup goalies look like walls against the Devils" for this season's team. Instead, we can focus on more valid issues like third period performances or just getting shots on net. Thank you for reading.